How does a young man with a passion for flight become a successful author?

Imagine twenty-year-old Barry teaching ground school as he works his way through college, trying to describe the sounds of low-frequency four-course ranges, used for navigation, to very confused students. “My attempt to whistle the sounds didn't help, so I told my class that I would attempt to record these sounds during my next flight and play the results at our next class meeting.”

Recording in 1958 was nothing like it is today with portable, battery operated recorders. Despite the challenges, Barry held true to his promise when he and his close friend, an electronic genius, Richard Somers set up a large, A.C.-powered, reel-to-reel tape deck in the backseat of a Cessna 170. They then recorded the sounds that he “failed so miserably to describe in class.”

Not only did they record the low frequency ranges, but they recorded numerous other sounds of aviation—marker beacons, localizer, VOR, and DME identifiers, and a ground-controlled radar approach as the controller talked a pilot through an instrument approach by providing precise heading and sink-rate instructions. 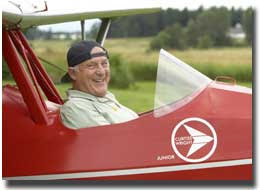 Barry’s recording was a success. “When I played that tape in class, 19 of the 21 students wanted to buy copies. Upon hearing about this demand, another friend, E.J. "Buzz" DeBardas, encouraged me to produce and market a similar phonograph record that was to be entitled, On Course, On the Glide Path. Writing the narration for this and subsequent 12-inch records was my first attempt at professional writing.”

Barry’s small business, Aero-Progress, Inc., was eventually purchased in 1963 by Times-Mirror for its subsidiary, Jeppesen. If you’re a pilot—you know the power of that name.

A year later the airlines began hiring. At the time the “Big Three” were American, Trans-World and United Airlines. Which route did Barry go? “I opted for TWA because it was the only one at that time with both domestic and international routes. It was the "Lindbergh Line," the "Airline of the Stars." For me, there was no other choice.” 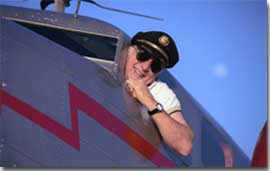 The stars were definitely shining on Barry. During that year, the editor of Private Pilot magazine, Robert Said, contacted Barry to tell him he liked his recordings and asked if he’d be interested in writing an article for their new magazine.

Barry said, “I was flabbergasted. I barely squeaked through English Composition and didn't know the difference between a split infinitive and a dangling preposition. (I'm not sure that I do now.) But the prospect of being published had great appeal.

Said was a Pulitzer Prize nominee and told Barry, "It is more important to write something about which people are interested, than it is to be a proficient grammarian."

Said then shared a story with Barry about a manuscript submitted to a New York book publisher by Robert L. Scott. Robert. "It was atrociously written, but the underlying story was so compelling that the editor believed that it would be worth the effort required to make it readable." Barry tells me, “If this editor had not seen beyond the crude grammar and punctuation, God Is My Co-pilot would never have become a bestseller.”

When Barry said, “Reading some of my early material makes me cringe in embarrassment,” I smiled. I’m sure we’ve all been there. But Barry’s words of inspiration on how to succeed in writing resonate with me, as they are so true.

“Writing, like other crafts, is a skill that improves with time. Said used to tell me repeatedly that one can become a good writer only by "reading a lot and writing a lot." But despite all of the reading and writing that I have done, I still do not consider myself a particularly good writer. Richard Bach, Ernest Gann, and Antoine de Saint Exupery have arranged words to form literary strands of pearls. My best does not compare to their worst, but they provide the inspiration and lofty goals to which I incessantly aspire.” 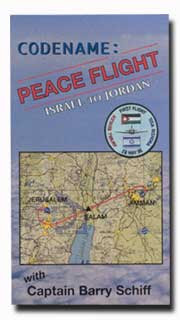 Barry doesn’t believe he’s an “artist in the style of the masters.” But he does consider himself as a decent craftsman who’s achieved a modicum of success. What does he attribute that success to? “Not because of talent but because, hopefully, I communicate information worthy of distribution.”

“I continue writing and hopefully improving because it enables me to teach in a very large classroom. (Not everyone necessarily agrees with all that I profess, but that is another story). Writing also gives me an entrée deep into the industry I so love. The rewards far outpace the agony of staring every month at a blank computer monitor and a blinking cursor when I sit down to write.”

My favorite words-of-wisdom from Barry is the necessity of being thick skinned.

“Most rewarding are occasional letters detailing how I wrote something that might have made someone's flying a little safer. Conversely, there are those who are spring-loaded to jump on and chastise me for my errors. One cannot write for the public and be thin-skinned. To paraphrase a printer's axiom, "everyone makes mistakes, but writers publish theirs." 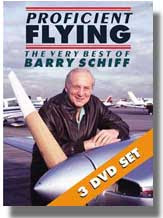 Barry has many articles that define his personally developed concepts, procedures, and techniques. When I asked him if he’d share one technique with us he said,

“The first one involved turning around following an engine failure shortly after takeoff. The "rule" said never to do this, but it seemed illogical. There were times when such a maneuver could be safe. So I researched the subject and have been writing about it every since I first wrote about it in 1959. Since then, many others have done the same.”

Barry also developed the procedure of stopping the prop at high altitude following an engine failure to improve glide range, as well as the concept of pressure-pattern navigation for light airplanes at low altitude.

Proficient Pilot 1 and 2, Flying wisdom, and Flying the golden Science, all touch on a different area of training. But the purpose of his writing had one focus—“To present material in a different manner so that the subject matter becomes easier to understand. I have always strived to simplify complex subjects without sacrificing accuracy.”

Wait until you see what Barry is doing for future pilots! You won’t want to miss tomorrow…Wednesday Wellness is dedicated to relieving stress, compliments of Barry Schiff. 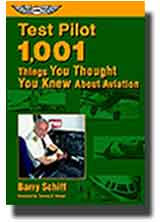 Leave a comment for Barry, and you’ll be entered in the drawing to win an autographed book, Test Pilot, 1001 Things You Thought you Knew about Aviation. Drawing to be held December 22nd.