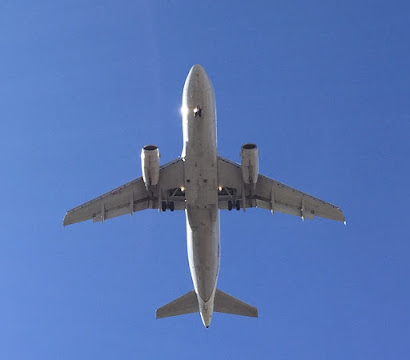 My doctoral research identified a significant problem with Airline Pilot Training that is impacting pilot performance. In that many carriers have adopted the training methodology Advanced Qualification Program (AQP), during my research, I queried pilots as to whether or not they were trained under AQP. Of the 5811 pilots who responded, 49% were positive they trained under AQP, 16% said they were not, and 36% were unsure. I then asked if they were trained with normal crew complement, meaning Captain with a First officer, and 50% said they never were or at times were not.
Results of my research also identified a negative safety culture, and this negative safety culture impacted training. Among the Safety Culture Questions, overall 41% who responded stated they were unsure that the leadership in charge of developing training programs had the expertise of learning, and 46% were unsure, or did not believe, that their company would exceed regulatory compliance.
Could Negative Safety Culture and the
Lack of AQP Regulatory Compliance
Be the cause of Negative Training?
AQP is a train to proficiency program that was introduced in 1990. At the time, pilot training shifted from individual training and performance assessment to crew-based training and performance assessment. This crew-based performance is a line-oriented training process that enables crews to manage the aircraft while improving team and communication skills. Within the AQP structure, pilot training is a proficiency-based concept focused on an entire system perspective versus individual training components. Airlines who adopted AQP, realized the economic benefit that came with reducing the training footprint due to the structure and mandated requirements. AQP training focused on Crew Resource Management (CRM) and communication skills to eliminate pilot error.
While AQP is a voluntary program, when implemented the airline is expected to exceed minimum training standards, and adopt a full AQP train to proficiency program that mandates inclusion of CRM, LOFT, and LOE scenarios. For those pilots who are interested if you have AQP, if you hear the terms LOFT and LOE, then you have an AQP program.

Line Operational Evaluation (LOE): LOE is an evaluation of individual and crew performance in a flight simulation device conducted during real-time.

Line Oriented Flight Training (LOFT). LOFT is conducted as a line operation and allows for no interruption by the instructor during the session except for a non-disruptive acceleration of uneventful enroute segments.

Crew Concept and AQP
The FAA identified that while training in a crew concept, that 50% of the training included pilot not flying duties—in the pilot’s respective seat. To meet this crew requirement the Captain must be in her seat as the pilot not flying, and the first officer had to be in his seat when he was not flying. Therefore, if we pair two first officers together 50% of these pilots’ training is not in his/her respective seat. Furthermore, these pilots are not only missing 50% of their training, but the very purpose of AQP is crew resource management during “normal flight operations,” and never is an airliner dispatched without a Captain for takeoff and landing. For this reason, the FAA mandated specific rules that all airlines must obey if they are operating under AQP. While the FAA has provided flexibility in unusual circumstance to provide a “seat substitute”, a non-trained first officer, who is also receiving his training does not meet the intent of this flexibility. Nor does scheduling in this manner to save money at the sacrifice of training, as a valid circumstance.
Substandard Training
As it turns out, AQP carriers may not be following the rules, and the FAA is turning a blind eye, or simply doesn’t understand the rules themselves.
During a conversation with an FAA inspector a few years ago, who is currently on the certificate of an international airline, I had mentioned AQP. He said, “I retired before AQP came about, and really don’t know anything about it.” He had been a captain and instructor at an international airline before he joined the FAA. While I am uncertain if this FAA representative is in the minority, or the agency is overlooking this requirement due to the identified pressure on FAA representatives.  However, there is a problem.
While ignoring the rules may be common practice, the concern during Covid times is that come October, airlines will be furloughing thousands of pilots. In addition, many senior pilots and check airman have taken voluntary retirement. The impact will be thousands of training events industry wide, with the loss of our on-line safety nets of experience. In the interest of safety we cannot afford to shortchange training.
The simple request is:
In the interest of Safety,
Please, Just follow the FAA mandate
For more information on additional requirements please read the FAA website under FAA AQP Mandatory Requirements.
Advisory Circular AC 120 54A:
Crew Scheduling and Pairing Strategy. A basic requirement of AQP is to train and evaluate crewmembers in a crew configuration identical to line operations. In AQP, line crewmembers must be scheduled and paired together, as much as practical, in a standard crew configuration (e.g., line captain with line first officer). The FAA recognizes that circumstances will occur where the initial composition of the schedule cannot be maintained. Hiring requirements, illness, high first officer to captain ratios, or failure of a crewmember to progress, are all situations that would necessitate providing a seat substitute to complete the training (p 31).
If you’re interested in reading the dissertation
Click HERE.
If you would like to read the book based on the dissertation
Please get your copy of
Normalization of Deviance a Threat to Aviation Safety
Autographed book purchased here,
or Ebook on Amazon 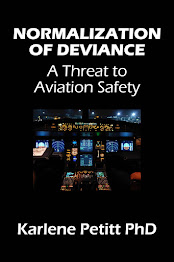 The following comment arrived yesterday and reminded me of the importance of this research. If you're a pilot or a passenger, this is a must read.
"I read Normalization Of Deviance with great interest. This was a long-awaited book for me. It was worth the wait. Every pilot should read this immediately. As a pilot of over 43 years, Including time as a major airline Flight Instructor and Line Check Pilot, I too have seen the steady degradation of hand-flying skills of our pilots. It is sometimes to the point of scary. Karlene presents hundreds of true anecdotes from professional pilots around the world, showing the problem is not isolated to one airline, or one region. It is a worldwide problem. The current training situation creates pilots who have very little systems knowledge and get very little "stick" time. It is time to fix the industry."  Captain Rice
Enjoy the Journey...
Justice is coming soon!
XO Karlene

Posted by Karlene Petitt at 10:41 AM 3 comments

"Survey Says FAA Inspectors
Feel Pressure
To Accommodate Business"
"An independent survey of FAA safety division employees suggests they feel pressure to accommodate industry demands at the expense of safety," was sent to 7000 FAA employees. While only 25% responded the results identified there was pressure to look the other way. As reported, "Peter DeFazio, D-Ore., chairman of the House Transportation Committee, said it revealed “a disturbing pattern of senior officials at a Federal agency rolling over for industry.”
The article also stated, "FAA Administrator Steve Dickson, who fared pretty well in the survey for his posture of standing up to Boeing, agreed with DeFazio and said the “problems” revealed by the survey will be addressed. “It is completely unacceptable that there are employees who lack confidence that their safety concerns are taken seriously.”
Those in the know cannot overlook the irony the Steve Dickson comment. However, the FAA proposed a $19.68 million dollar fine in March of 2020, and settled on a $1.25 million dollar civil penalty as of August 5, 2020. While $1.25 million is a token penalty, we must all question the FAA as to why they are not fining airlines who pressure employees to look the other way and roll over. Worse yet, when employees are retaliated against for bringing safety forward, why aren't the airlines fined?
The FAA is the controlling agency, and if they feel pressure to look the other way, imagine how airline employee's feel when their livelihood depends upon their silence. It has become evident as to why there is no accountability at the airline executive level. They make the rules. They break the rules. They terminate employees who push for a safer system. They pressure administrators to look the other way.
It's difficult when the fox is guarding the henhouse to impose a fine upon the very system that fox participated in creating. Regardless, like Russ Niles reports, "Accidents happen and people get killed.”
Read the full article here.
Enjoy the Journey!
XO Karlene

Posted by Karlene Petitt at 11:08 AM 0 comments