Like father like son, Curt hadn’t always wanted to be a pilot. But growing up in an aviation family with an Airline Captain for a Dad and a mother as an ex-flight attendant, you know that it was in the back of his mind. Yet he was undecided and searching. I seem to remember his dad, Bob Alexander, searching too.

Curt said, “Of course my parents were supportive of whatever I would choose. My dad just said to do what makes you happy.”
Accepted into Central Washington University (C.W.U), he still wasn’t sure which direction to go. He decided to join the Army Airborne. Unfortunately after months of training he discovered that he had a stress fracture that would take many months to heal. He had the option to stay in and spend six months or longer attempting rebuild is leg, with a high probability of it breaking again, or he could take a medical discharge.
He opted to be honorably discharged because he realized that he, too, wanted to become a pilot. A far better career flying planes than jumping out of them. Within weeks, at the age of 19, he was enrolled into the C.W.U. aviation program in September of 2000.

He earned a four-year degree and obtained his flight ratings then became an instructor at Wings Aloft at Boeing Field. It wasn’t long until he was flying charter flights for them, too. Charter flights and instructing wasn’t quite enough to pay the bills, so like all dedicated pilots he held down a second job— one that most pilots would envy as a brewer at Mac and Jacks.


Great fortune occurred when Curt got hired at Mesaba. But unfortunately after about a year and a half he was furloughed. Unfortunate might not be the right word in Curt’s case. 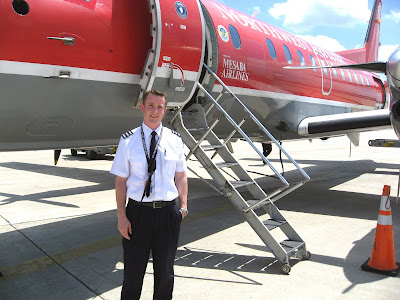 When he was first hired by Mesaba airlines, he didn’t have enough hours to work for Compass. But his year at Mesaba, he earned that much needed experience and time. And then it gets better—Compass was giving preferential interviews to Mesaba’s furloughed pilots. Within three months Curt slid on over.

He’s now based in Minneapolis flying as a First Officer at Compass Airlines. He's been there since February 2010 and loving his career choice.
What was life like with a dad for a pilot?
“As for growing up with a pilot as a dad, it was definitely different. There were stretches of time where he was gone, and a few moves while we were young. But my parents made an effort to keep my sister and I in one place once we were a little older, even if that meant a commute for my dad. We were fortunate enough to see much of the world as a family. I would say that gave me a different perspective on the world growing up. And it definitely gave me the travel bug at an early age. By ten I knew how to bargain with the street vendors in Hong Kong to get a good price on a watch. Overall I admired my dad and how he pursued his dream. He simply said, ‘I am going to be an airline pilot’ and did.” 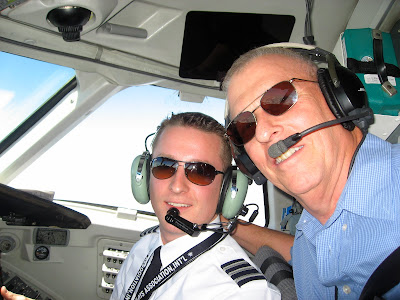 What is Curt’s favorite thing about flying?
“Well that would definitely be the traveling. Not many jobs take you to so many places. A lot of them I would never have thought of visiting. I also enjoy the ever-changing schedules. I would never fit happily into a 9-5 setting. I look forward to flying internationally in the future though.”
Curt’s parents were wise enough to allow him to find himself—Apparently a central theme through the generations of Alexander men. And this amazing young man never looked at the misfortune of a broken leg, a furlough, or hard work, as something to stop him from pursuing his dreams. And with each setback, another door opened. A great lesson everyone can take away with his story. 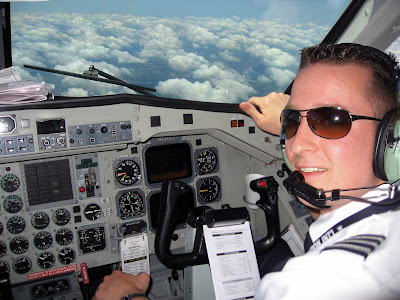 Fly safe Curt and continue to enjoy the journey you call your life. I know your dad is proud of you too! I’m looking forward to flying an international trip with you one day. It will happen.
Enjoy the Journey!
~ Karlene
Posted by Karlene Petitt at 6:53 AM