Amanda Franklin recently passed away, leaving a huge hole in the sky and the hearts of many. The rain poured from the heavens as tears flowed with the passing of this beautiful and talented woman. She will be missed by many, but her memory and imprint on this world will last forever. 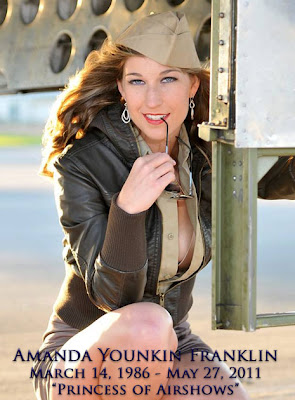 Christine Hollingsworth shared Amanda's story with me, and I asked her is she wanted to write it. Christine sent me the following post of how this amazing woman, Amanda Franklin, lived and inspired many, and is the reason Christine flies today.


"I cried writing this. Anyone more than a little familiar with the air show circuit would recognize Amanda and her husband, Kyle, as they performed their famous Pirated Skies routine around the country. I was lucky enough to see them twice at Oshkosh. Kyle flew their Waco biplane, and Amanda was his wing walker.
Both Amanda and Kyle come from long lines of air show pilots. Kyle's famous father, Jimmy Franklin, was good friends with Amanda's father, Bobby Younkin. All of them were active in air shows across the world for many years. Amanda's brother, Matt, also performs in air shows in a very well-lit Twin Beech. 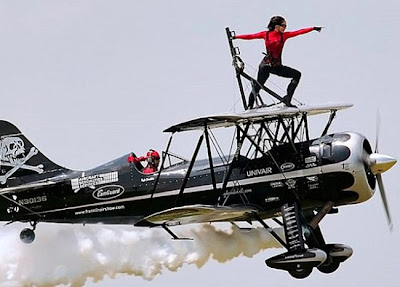 Amanda became a pilot at sixteen and learned to fly more than fifteen types of airplanes. Watching her at Oshkosh was one of the moments that made me want to learn to fly. I was lucky enough to talk to her after her performance was over, and I told her I wasn't sure if I wanted to fly because I had never seen any women around the airport at home, only guys, and I didn't want to be the only one there. She assured me that I would have plenty of support from other women pilots and mentioned the Ninety-Nines, of which she was a proud member. 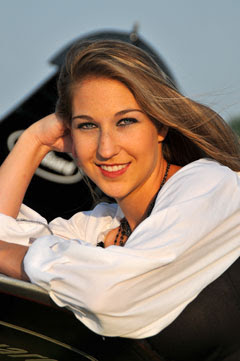 While on the ground, Amanda dedicated all of her time to paying tribute to our soldiers and helping more people, especially young people, become interested in aviation. She was wonderfully sweet and caring, and above everything else, she was brave.
March 12, 2011. While performing at an air show in Brownsville, Texas, the biplane's engine suddenly failed. Since they were so close to the ground, Kyle did not have much time to conduct any emergency procedures. Amanda had enough time to return to the forward seat in the open cockpit before Kyle landed adjacent to the runway hard enough to collapse the main landing gear. Even though the engine quit, the electrically-driven pump for the smoke oil continued to run, dumping the flammable oil into the hot engine compartment. Both Kyle and Amanda survived the initial crash but experienced severe burns and were taken to the hospital. 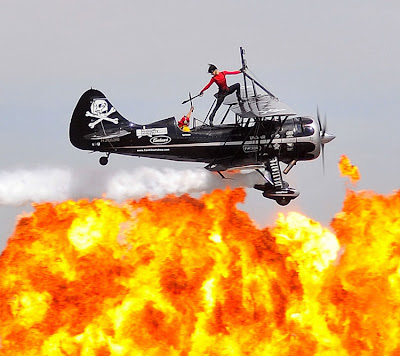 Kyle, being seated further back from the engine, was burned less severely than Amanda and was well enough to update the couple's Facebook page every day, giving reports on their healing progress. Many people sent get well wishes, cards, and donations to help with their hospital bills, as well as suggesting unconventional burn treatments that had been tried in other countries. Amanda's injuries, however, proved to be more serious than the doctors initially thought. After one particularly bad day when an infection raged through her body and destroyed most of the experimental skin grafts she had just received, Kyle believed Amanda did not want to continue suffering through months of painful treatment that did not appear to be working, and the doctors advised him that after taking such a hard hit to her immune system, she was unlikely to survive the following two weeks leading up to her next skin graft. She was placed on comfort care, and the world waited.


Amanda Franklin passed away on May 27. She was twenty-five years old, and she was one of the biggest inspirations to me. It is entirely possible that I might not have learned to fly without watching her perform or speaking to her. The world is missing a beautiful, talented woman pilot.
As tragic as their accident has been, Kyle has tried to help others use it as a learning experience. Several manufacturers are considering redesigning their smoke oil systems in order to prevent a similar incident from occurring. We shouldn't need horrible accidents to happen to show us our mistakes, but when they do, we owe it to the victims to learn everything we can and do everything we can to keep it from happening again.
Kyle has a long way to go as far as healing on the inside, but he also has to heal on the outside. If you would like to donate to help with his family's medical bills, please visit the International Council of Airshows Foundation
A fund has also been set up through Moonlight Fund Moonlight Fund that specifically helps female burn victims."
Thank you Christine for sharing Amanda's story. Kyle we are all terribly sorry for your loss, and my heart goes out to you and your families. Amanda's legacy lives on in others, and will continue to do so.

Enjoy the Journey... You never know how long it will last.

All pictures and information courtesy of FranklinAirShow.com

Posted by Karlene Petitt at 5:47 AM