Friday's Fabulous Flyer
Daniel is just 19 years old, but you would never guess it. His life is on the fast track to make his commercial aviation dreams come true.  He currently attends University Of North Dakota, UND, has his Commercial SEL/MEL Instrument, and will be graduating next year with his CFI/CFII and a four year degree.
His interest in aviation began at the age of eleven when his family took a trip, on a Champion Air 727, from Minneapolis to Seattle to visit some relatives.

"I was amazed with everything about the flight; the view, the speed, all of the buttons in the cockpit. When we got to Washington I was already excited for the flight back!
The next summer when I was 12 I took my first flight in a general aviation aircraft with my grandfather’s friend who was a private pilot. I remember the first time I took the controls I was too short to see out the front window and had to fly by the instruments, I guess you could say that was the beginning of my instrument training! I flew with him quite a few times over the years, which helped me when I started my own flight training."

Daniel began flying with Civil Air Patrol when he turned 16. He soloed a month after his 16th birthday with around 12 hours of flight time, and finished up his Private pilot’s license just after his 17th birthday.
After graduating high school, in 2009, he began working on subsequent ratings and toward a bachelor’s degree at University of North Dakota. A super star he is... he's just finished his second year and will be graduating a year early, in June of 2012. How did he due this? He earned 32 AP credits from high school. 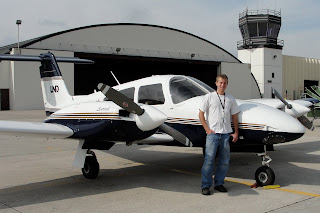 He's just recently completed his Commercial Single engine, Multi-engine, and instrument training and tells me that this Fall he'll obtain his CFI then next Spring his CFII. In May he will begin a CRJ transition course. North Dakota University is not your normal college. Go to school there and fly a CRJ. How cool is that!
I asked Daniel what his plans are for the future.
"After graduating next summer I hope to get hired by a regional airline, particularly a Delta Connection carrier. Flying for Delta Air Lines is my ultimate career goal, particularly flying the 757/767. That airplane goes almost everywhere in the world and I have heard it is one of the best flying airliners out there.
My goal is to get hired at Delta by age 25. Is it a realistic goal? Maybe, maybe not. Will I try and shoot for it anyway? Yes! "

Daniel, I have no doubt you'll accomplish all your goals. You are driven by a passion, and are flying toward your desired career with focus and dedication. You are setting an excellent example for anyone striving to become a pilot.


I actually became connected with Daniel on line, after I started blogging. He began sending me aviation questions and has motivated and inspired many of my posts.  Then one day he said, "Do you know Lane Littrell?"  Of course I do. He was my Director of Training at Northwest Airlines when I was a 747 Second Officer instructor. Lane is one of those people always going that extra mile, and sharing the simulator with aviation enthusiast Daniel on his day's off  is such an example. What a great surprise to see this picture of Lane and Daniel in my old 747 simulator.

Daniel, best of luck with your aviation career. I guess I'll be 55 when you're hired by Delta, and who knows, maybe I'll be your instructor.  Regardless, I know that one day we will be sharing stories on the line together. But you might have to come to the to the 747 first. Don't worry, you'll love her.


Keep up the great work. Keep the questions coming. And remember... don't worry about anything. Continue to do your best and stay healthy and all will work out perfect in your life. Your hard work and dedication will pay off.