BOEING 707
Last night I attended the "Launching the Jet Age First-hand memories of the first U.S. jetliner" at Seattle's Town Hall Center.  I returned home, drunk with fatigue from the week's events, and rolled into bed with the intent to write about the event this morning.


Who was on the panel?

Joe Sutter--- the "Father of the 747"--- Joe was also the legendary engineer on the Boeing 707! He shared stories of how instrumental Boeing was in establishing our current FARs. Boeing made the planes... they made the rules.

Brien Wygle --- Test pilot for Boeing, on the 707 and many more. He told us how the 707-80 prototype was very restrictive with speed and flaps. 1958--- Brien had flown the 707-80 to LA for a quick demo with Howard Hughes.  Howard loved to fly, but he had a little problem with speed control on the Boeing because of the other planes he'd been flying. The 707 had a more pitch up attitude. On, what turned out to be, their final demo approach, Howard's speed got a little fast and a center flap left the plane and landed on a car in the parking lot. Unfortunately that car was owned by the FAA, and Brien was charged with Reckless Flying. This was the only reason he didn't receive the award for 50 years without an accident. Last night Brien confirmed--- "It was reckless to fly with Howard."

Peter Morton --- B707 engineer, (retired) Vice President at Boeing, trustee at the Museum of Flight, Board member at the Seattle Girls' School, and one of our pilots at our December 5th Fly it Forward event, spoke of what it was like to teach the first 707 pilots "how to fly jets."

Paula Clark --- Stewardess for Pan Am, who later retired with United, shared stories of the good old days in the cabin.  Bright and funny, this woman had the audience laughing. You, too, can hear her stories. All you have to do is take a tour of the Seattle Museum of Flight! Yes, she is working as a tour guide at our local museum.

We viewed excellent footage with Tex Johnston. Click Here to see a video of his famous barrel roll.
Why didn't Bill Allen, at Boeing, fire him? Word is--- they'd had so much positive response from customers, they didn't want to turn this into a negative event. They also had an 18 million dollar insurance policy on the only pilot who could fly the plane--- Tex. 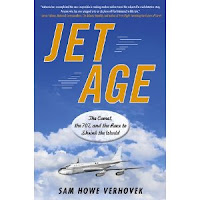 This event was in honor of Sam Howe Verhovek's recently published book--- Jet Age, The Comet, the 707, and the Race to Shrink the World.  I also had the opportunity to meet Sam's son who we all hope will become a pilot and join us on this aviation journey.

Thank you Peter for inviting me to this extraordinary event!

I too have a bit of history with the B707--- this plane continues to touch my life.  I was so close to getting a type rating in the 707 when I'd gone down to Guyana to put their B757 into service. I'd negotiated this as part of my compensation.  I would fly their plane and earn my rating. Just before I got there, they'd sold it.  And the connections continue... 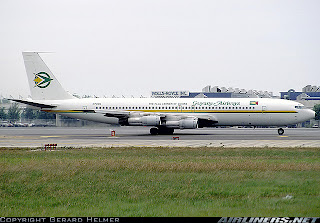 My husband was at the Sea Fair races (Gold Cup) the year Tex rolled his plane and he got to watch it first hand. Tex was also friends with Jack Sallee, owner and operator of Coastal Airways, and Braniff captain, who lived in Sequim. Jack was a good friend of mine whom I loved working with at both Costal and Braniff. One day Jack brought Tex to Seattle and we had lunch together at Longacres Race track. Tex told me that he took a shower with his boots on, after he rolled the plane. A character in the history of Aviation.

The legends live on.... and hopefully we'll hear more about one of them this Friday. A man who keeps giving back to his community.