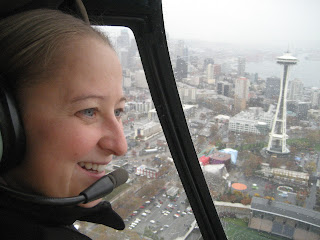 Fabulous she is... she's funny and brilliant too! She sent me her bio last night at 10 p.m. while I was busy being a sleep camel--- storing up on my sleep for the next round of exhaustion, and she made this easy. 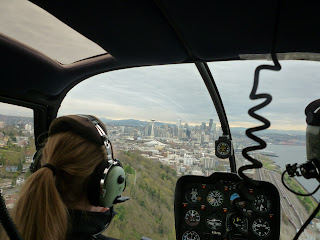 "I was born in Bolivar, Missouri at a very young age... the youngest and cutest of three, and the only girl. I'm sure my mom was ecstatic to put girly things on me but that was very short lived. When I was about two years old, my dad bought a Piper Tri-Pacer and I was strapped (willingly) into it. There are no pictures, and I have no way to prove (or disprove), but rumor has it that I was perched high on my booster seat holding onto my dolly as my dad did whooptie-dos and barrel rolls. I had a smile on my face the entire time! It was probably in those first flights which defined what I wanted to do for the rest of my life. 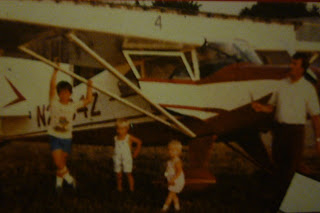 My family and I (and the plane) moved to Bremerton in the late 80's.


I thought everybody's dad had a plane... and then a few years later, he sold it. Life just wasn't the same and I just had to find a way to fly again. My teachers can attest to my dedication of keeping my dream alive as I'm sure they were sick of seeing reports about flying, space travel, planets and the Wright Brothers. Even my Mt. St. Helens science project had aerial pictures that were taken from my dad's plane. In 1999 I started fixed wing lessons part time at Bremerton airport, but that was short lived when the flight school closed. (Shhhhh, don't tell my friends I've flown planes. I have a reputation to uphold, ya know!) :)  I started again at Tacoma Narrows in the Summer of 2001 and got about 35 hours with 11 hours solo.  We all know what happened  in September, which in turn forced that flight school to close as well. 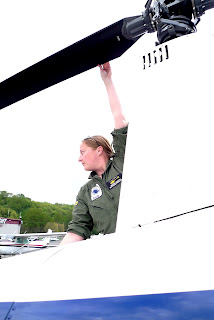 Another few years go by without any progress towards my dream of flying, I heard an ad on the radio about a helicopter academy.  I couldn't call the number fast enough to get information.  I hadn't ever thought about flying helicopters before and like many others, figured you had join the military to do it. I attended the seminar and took a demo flight and felt an overwhelming sensation.  I knew that THIS is exactly what I wanted to do. It all made sense so I signed up for flight school, moved 5 minutes away and completed my CFI in 18 months. My first instructing job was at Tacoma Narrows airport. One of my favorite maneuvers as an instructor is to teach students how to hover... something they couldn't do just 10 hours before. It's an incredible feeling to know that you've had an impact on someone's life in such a short time.  In true Amanda fashion, my flight school filed bankruptcy and I was once again looking for a job. 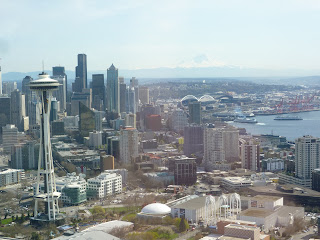 Knowing that it might be awhile before finding another flying job so I went to school at Green River Community College in pursuit of an Air Traffic Control Degree. While attending GRCC, I got a job as an intern at the FAA in Renton in the Planning & Requirements department. One major accomplishment while working for the FAA was winning the "Most Creative Paper Plane" award at the annual company picnic. (I'm sure this prestigious award will get me far...) :)  Just at the end of my degree program and internship, I received a call from Ichiro Seshima, Chief Pilot/Owner of Classic Helicopter, asking if I would be interested in working for a flight school again. "Yes!!!" was the only answer. I started in October 2009 as a flight instructor/tour pilot/administrative assistant/VA administrator/ Drug and Alcohol supervisor/marketing representative/etc.  I wear a ton of hats, but enjoy  the variety and challenge. 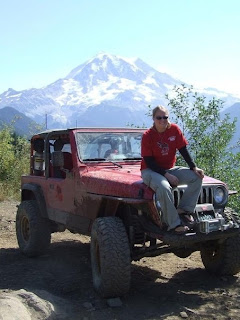 
I've flown my fair share of tours, but flying kids and girls of all ages are truly my favorite.  I've heard "whoa, our pilot is a girl" so many times that it hardly phases me anymore. Growing up, I never had a thought that I wasn't cut out to be or good enough to be a pilot, but realized that it's still not 100% accepted so it's kind of funny to hear the surprised comments from customers. That's why I'm participating in Fly it Forward at Renton Airport, what a great way to end the year by sharing what I love and inspire girls for 2011. 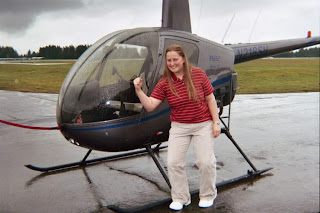 
Greg Baker donated some hours to help beat Canada!  He's extremely generous with his time and talents and loves sharing the gift of flight with those that have never experienced it. I've met and swapped stories with some truly amazing people along the way and am very fortunate to be able to have the job that I do and share my love of flying with so many people.  As an instructor, I enjoy being able to spark someone's imagination when they realize that they too can fly."

Thank you Amanda for your incredible story! 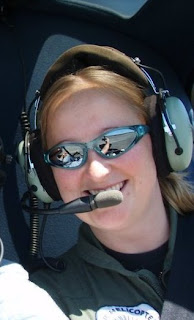 "-After a 2 day, 1500mile XC from Seattle to Seward, AK my fortune cookie said "Avoid unchallenging occupations, they waste your talents"

Amanda has over 800 hours and about 50 "first flights" for the centennial celebration... so far. :)

Today is another day. I awoke to another 89 emails with people wanting to fly with Amanda--- but she is already booked full.

Greg Baker, from Classic Helicopter corp is donating a helicopter for three hours to support women in aviation. Thank you Greg! We'll read more about him soon.

Austin may join us if the weather warms up. Shad is helping. Jay is flying his 182 in again for day 3 of the fun. And Mark may join us for a few hours again. Mireille Goyer, the woman behind Centennial of Woman Pilots is driving down from Canada.  We have people. Blue skies. Faith. A so many flying it forward today!

Enjoy the Journey--- It's been a good one!

Posted by Karlene Petitt at 9:12 AM