Fabulous doesn't come close to describing this aviator, adventurer, inventor, engineer, and all around great guy.

Doug didn't start out with the dream of becoming a pilot. As a matter of fact, in 1980 he'd attended ground school with a friend. Because of limited funds, they had a choice between buying a catamaran or taking flying lessons. They purchased the catamaran.

It wasn't until a few years later when Doug was laying around on a lazy Sunday morning, when he decided to venture to the airport. His first flight was with a former air force pilot in a 2 seat Piper Tomahawk and he says, "The rest is history." 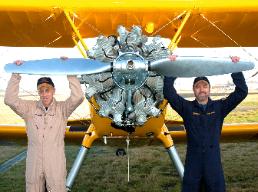 1989--- Doug's father was diagnosed with Lou Gehrig's disease, ALS, and eventually died of respiratory failure. His father chose not to go on the ventilator.  At the time they were bulky and inefficient. Doug had a new mission--- to create an in home ventilator.

1997--- he formed the company Pulmonetic Systems which developed the LTV, a portable ventilator, to improve the quality of life for patients such as Christopher Reeves.  200 employees and 16 U.S. patents later, Doug sold his company to fly.


Inspired by Steven Coonts' Cannibal Queen, Doug purchased a 1942 Stearman and spent 5 years and 3000 hours rebuilding her. Oshkosh in 2001.  Then in the fall of 2005 he shipped her to Australia and flew it 4000 miles in the remote outback. 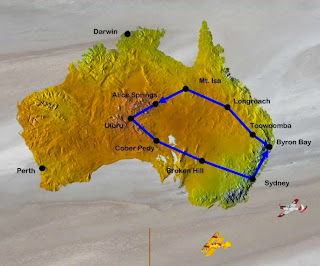 This is a story you'll want experience--- and can!  http://www.vectoredflight.com/

And the adventures continued...

Apparently Doug spent his youth taking apart and rebuilding anything he could, and some may think he's yet to grow up. I think he loves the big kid tinker-toys. He purchased his second box of parts (The Stearman was the first) --- this time a 1955 de Havilland Beaver--- N67DN. This particular plane had been in the movie, Six Days, Seven Nights, staring Harrison Ford and Anne Heche, and had been totaled on one of the sets. 6 years and 7000 hours of labor he gave this beautiful plane the life of flight once again.


Doug had a great idea to fly the Arctic. Why? "In the summer, it's cold, wet, and drab; and that's the good season.... from endless nights in winter to the sun that never sets in summer, this mysterious place is, in a word, exotic. So as a pilot, seeing the Arctic from the air seemed like a great way to go, and just to add a higher degree of difficulty we decided to do it in seaplanes on straight floats. Amphibs are for wusses."
This idea to fly the Great Arctic Adventure was harnessed when Doug found his partner, and "leader" of their adventure--- Mark Schoening. Mark is another story that must be told.  I'll stay focused on Doug for now, but beware Mark--- I'll be looking for you.  Two years of planning began.

"For the Beavers: fuel shipped ahead on icebreakers, a risk analysis to identify and prepare for mechanical failures, and extensive preventative maintenance. For the pilots, training: cold water survival, underwater egress, rough water landing, and CPR to name a few. And then, on August 2, 2008, plans morphed to action, and the Great Arctic Air Adventure lifted off Lake Washington and banked to the North." 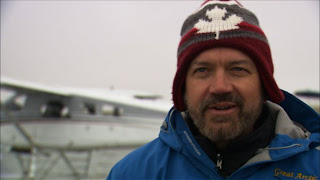 He's obviously plotting his next mission

Nobody can tell the story of the Great Arctic Adventure better than Doug.  "Arctic rain that came in sideways driven by a frigid 30-knot blow, blasted through the seams of our tent, slid under our ground cloth, and seeped into our sleeping bags... swarming mosquitoes, cold wet feet, and unflyable weather...  The flyable gap between the heavens above and the earth below was shrinking, and in the face of the building headwind our groundspeed was deteriorating from a norm of 95 knots to under 60 knots, a precursor of things to come..."
His writing is as beautiful as his plane. A must read: http://www.greatarcticairadventure.com/
We need to take a little flash back to 1985. A time when Doug was backpacking with his Malamute, and ran into medical student who was interested in putting together a team. Within a few years they were racing all over the Pacific Northwest. 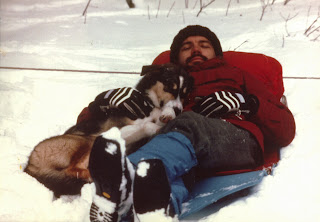 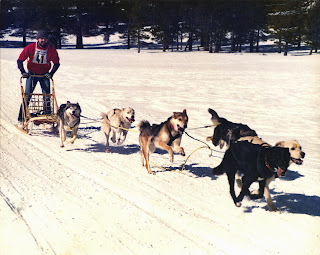 Snow camping in the Boundary Water area of the Canadian border. Trips to Minnesota and Alaska. Training a kennel full of dogs--- "That was a pretty exciting time, but very demanding working full time and trying to care for and train a kennel full of dogs."
Where did I meet Doug? December 5th, at Renton Airport he banked south, landed on Lake Washington and took women and girls for free flights. 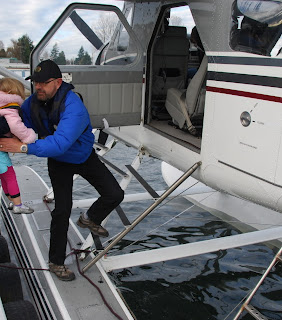 
Doug graciously donnated his time, his plane, and gallons of fuel his Beaver guzzled on behalf of the Centennial of Women Pilots: http://www.centennialofwomenpilots.com/.  Doug, among the smiling faces who joined you were my kids and grandkids. They're still talking about it.

What does Doug have planned next? 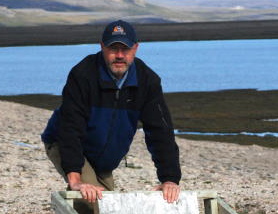 Doug, thank you for sharing your story-- and the many beautiful pictures.  I know there will be many more adventures to follow, and we all want to know what you're up to.

Remember to Enjoy the Journey--- I know Doug is.