"When we go with the flow of life,
everything always turns out
the way it is supposed to." 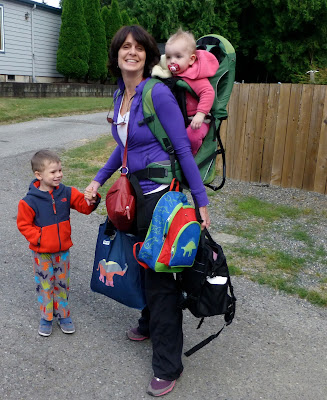 Thursday July, 11th was my 32nd anniversary, and was one of the hardest days I have experienced in a long time. I awoke to a homemade card on my computer. I'm giving my hubby this one. 31 years I remember, and he forgets. This year he had me. But it had been a very long, non-stop, on the go few months.

This was also the day I took two of my grandkids, Miles and Ellis, to their new home in Bend. As it turned out, my husband had a tee-time of 9 am with the neighbor and I told him he was not to cancel. He deserved the break.

I said, "I can walk to the airport. How hard can it be?" Miles was excited for the walk. He had done the distance with us numerous times. What I did not realize was how heavy the load would become. Ten minutes into the walk I thought I can't do this. I immediately changed my thoughts to... of course I can. I can do anything for 40 minutes."

The kids were great. Miles and I talked the entire way. We had a visual on the airport and had just turned off the highway when Ellis, 19 months old, said, "Uh. Oh." I glanced over my shoulder to assess the problem. Binky missing! Miles and I spent five minutes looking for it, to no avail, before we pressed on.

We made it to flight ops, and I apologized to the couple crewmembers who were interrupted by the baby's tears. Both said, "no problem." Yes... it was officially nap time. We unloaded her out of the backpack, and I would carry her to the plane. I thought this would be easier than unpacking her in security. 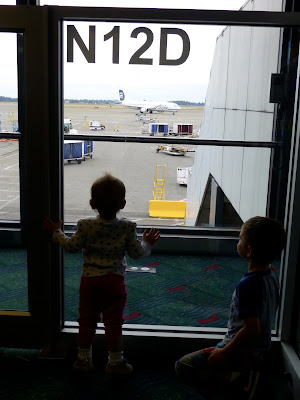 Gate: North satellite. Ahhh...the farthest distance we could go from where we entered the airport. Miles was excited to take two escalators down to a train, and up another to the plane. Bags strapped to my body, baby in arms, Miles in hand, we pressed on. Oh wait... I forgot to mention the TSA experience.

I beeped carrying the baby through the scanner because I had a hip replacement. I had to put her down and get her to go through the scanner by herself. There were a ton of people in line. Strangers watching, and she was apprehensive to let go of me. I got Miles to go with her and hold her hand, and I went back to the other side. Someone laughed, and she grinned to her audience. Which was much more fun than grandma. 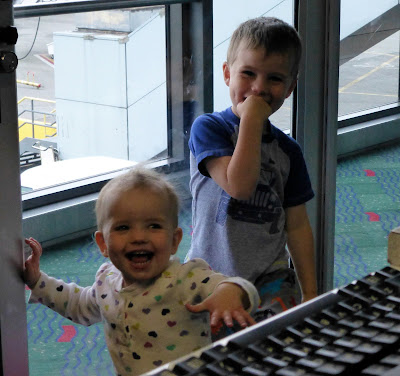 Not until I said, "Ellis, Miles, time to play run through the tunnel!" Did they come my way back through the scanner. Then I held her from side to side while they patted me down. I wish I could have got a picture of the TSA experience. But I wasn't allowed to touch my things.

Once at the gate, we waited 45 minutes to get on the plane. And when we did, something set Miles off. He cried. Then the baby cried. Then the baby decided she was going to have a meltdown. Note: Her temper tantrums are only second to her mothers when she was a baby. What can you do? She's willful, and was tired. But I have to thank the man behind who made faces at her, because the smile came back as the flirt came out. 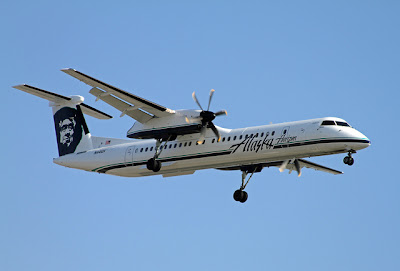 The passengers were great. One of the flight attendants said, "Don't worry about your baby crying. She's a baby." How nice was that. As hard as it is for passengers to listen to a baby cry, it's much harder on the parents. (And grandparents.) Thank you Alaska/Horizon for employing compassionate people.

As hard as the struggle this journey was, this was not the reason for the hardest day. It was the Wopschall family was moving to Oregon. Bend is a great place for their family, but it was still really sad that they will no longer be thirty minutes away. 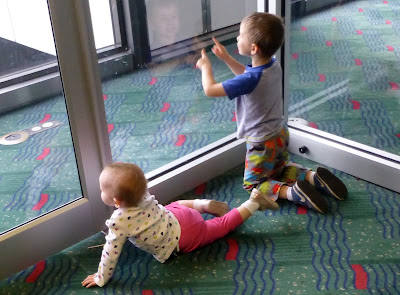 With a short return through security, I missed my non-stop to Seattle and had to go through Portland. While I sat in the terminal, I wondered...

Why am I supposed to go through Portland?

There had to be a reason. And as the day unfolded, I soon learned why.  Join me tomorrow to learn who I ended up sitting by on the flight to Seattle. What are the odds?

Nothing happens by accident, and I don't think this meeting was an accident either. I think a bit of fate had to be involved, because the ensuing discussion gave me an idea that will change our aviation world as we know it.

"Whenever your path gets altered from what you thought or expected it to be, know there is a reason. Embrace the journey and go with the flow... and be inspired."