There is Always Room For Improvement

A bunch of years ago I had an opportunity to fly with the fantastic folks at the NASA Dryden Flight Research Center at Edwards AFB, CA. It was great for many reasons. For one, I got first hand experience flying with a couple of NASA's living legends. What surprised me more than anything was how precisely these great aviators flew. While I thought of myself as a pretty competent pilot, I was taken aback by how accurately they flew during all portions of a flight. I'm not talking about during test points where it clearly mattered most. I'm talking every instant, from take-off through the mission, and after landing. These men really opened me up to a new level of disciplined flying.

I got this awesome chance because NASA was leading a joint USAF/NASA program on one of their highly modified F-15's. This particular model, affectionately known as ACTIVE, was more formally identified by its side number; NASA 837. As with many NASA aircraft, it was one-of-a-kind--really different than anything else you could imagine. Someday I'll get into the particulars of why this aircraft was such a hoot to fly.

As you can see, this aircraft is a two-seater. We always flew two pilots on these missions. The guy in the front seat was responsible for all the stick and rudder flying. The other guy backed him up. As the backup, the guy in back had lots of time to observe and learn, which is exactly what I did for my first several missions.

When I flew ACTIVE, I was in the last year of my first test tour. In many ways, I was at the top of my skills having benefited from flying hundreds of missions. As good as I thought I was, I wasn't as good as the guys at NASA Dryden. Let me explain. 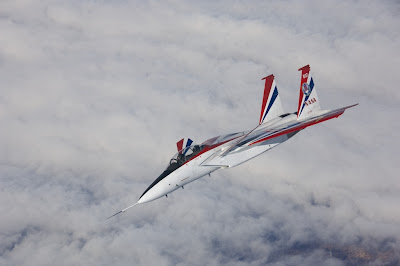 In the F-15, the tech order speed for climb-out was 350 kts. You’d take off, accelerate to 350 kts, then raise the nose to hold airspeed. In the regular non-NASA world, flying within 10 to 15 kts of plan was totally acceptable, especially if you were busy with other things like talking on the radio, coordinating your mission, completing checklists, all by yourself. Holding 350 kts with ACTIVE was a particular challenge because the airplane was so over-powered. In full afterburner at sea-level, the jet weighed less than the total thrust from its two PW-229 engines; 60,000 lbs of thrust from a 40,000 lb airplane.

You could conceivably accelerate straight up. As a result, we never did afterburner takeoffs and departures. There was simply no reason--i.e., too much thrust. Even in Military Power, the jet would out-perform any normal F-15. It was a rocket ship, and doing such mundane tasks as a simple climb to altitude would overwhelm anyone who wasn't prepared. For those of us who were prepared, it took more attention than usual which sometimes made staying on-speed a challenge.

Despite all of that, these NASA pilots were always at 350 when needed. It wasn't 349 or 351. They always flew on-speed. For me, sitting in the backseat for my first couple of missions in ACTIVE, a whole new skill level was revealed. They flew this way all the time. They were always on parameters. They were always on-altitude. No 34,900 ft or 35,100 ft for them. It was 35,000 ft and not a foot higher or lower. They were taking their skill level to "11," as it were. I thought to myself, "If they can do this, I certainly can." I was at the top of my game mistakenly thinking I was flying as well as anyone when these men 25+ years my senior where showing me a new standard to fly by. As a result, it has been my mode of operation ever since to try to meet their example.

Does flying so precisely all the time really matter? Not really, as long as you are getting the job done. Still, if it's not hurting anything, why not? If you have the capacity, why not fly as perfectly as possible? In fact, why not endeavor to fly as well as you possibly can all the time, versus "just good enough"? This last statement makes sense on many, many levels.

Since then, I've tried to be as perfect as I can in all phases of flying. I found this is especially important when battling complacency which is a danger for anyone very familiar with an airplane. I can't say I'm "there" yet. I'm obviously not perfect. Still, it feels right to point in that direction and keep trying to be as good as I possibly can be. Perhaps, someday, I can be as good as those guys at Dryden. I figure there will always be room for improvement, right up until the day I pass on. While I might never get to that ultimate level, I might as well keep trying. I'll be better for it in the end.Cheers

Note:
The photo is of Tm flying ACTIVE which also happened to be his last fight in the F-15.  "It was a great mission involving tankers, other highly modified NASA aircraft, dozens of ground support folks, and little ole' me flying ACTIVE.  Because there was a press interest in the project and the success of the flight, this mission turned out to be my most photographed of all my flights."