"Regarding normal flap operation: I never understood how the flaps 1 position worked on an airbus. I see the flap lever only has a "1" position, but the indicator sometimes says 1 or 1+F. So when would it have flaps in addition to slats? Is it an FMS input or system logic?”

This is a great question, and this is how the system works:

Anytime the flap lever is moved to position 1, the slats move.

The question is… when will the flaps come out?

If only slats were out, then we would only see 1.

In addition to the slats, the flaps will also extend to 1 when…
If we’re planning a departure, we want our flaps out, not just the slats. Airbus logic knows this and the flaps will extend too.
Sequentially this makes sense when retracting. We wouldn’t want them to go from flaps 2 to up, losing our lift, until we're ready 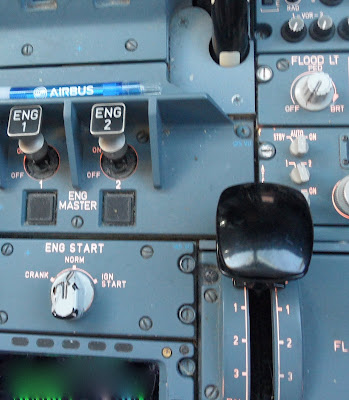 When won't we get flaps 1 when we select the 1 position?
When flying this plane everyone knows that Flaps 1 on arrival doesn’t really do a whole lot for slowing their plane. Do they know why? I'm not sure how many remember that we don't even have flaps when we select 1.

So what would be a really good beer question?