Most Female Friendly Airport in the United States! 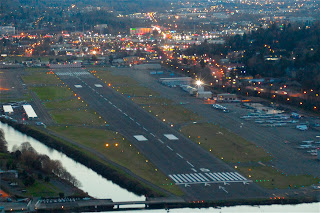 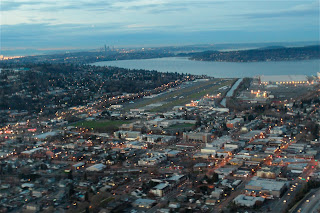 March 8 1910, Raymonde de Laroche became the first woman to earn a pilot license in the world. In September of the same year, Bessica Medlar Raiche, a Wisconsin native, became the first woman to solo an airplane on the American continent.
One hundred years later, to celebrate the achievements of these trailblazing women, pilots worldwide took to the sky. We introduced 1647 girls and women to the joys of flying in 29 countries on 4 continents, thanks to Mireille Goyer --- Centennial Of Women Pilots sponsored event.
On January 30th everyone posted their current numbers. On January 31st, we were 75 people in the lead for the world title. But despite our best efforts, we at Renton airport were unable to bring home the award for the Most Female-Pilot-Friendly Airport in the World. That title is now held by Oshawa Canada with a total of 475 flights.

Congratulations Oshawa and all that flew--- You did great!
Kpong Field in Ghana earned the title of Most Female-Pilot-Friendly Airport in Ghana and 2nd runner up in the World with a total of 97 flights.
The Most Dedicated Woman Pilot in the World is:
Amanda Sargent
Amanda, a helicopter pilot and instructor in Seattle, WA, United States--- Classic Helicopters at Boeing Airport--- conducted a total of 119 flights. 67 of these flights took place at Renton Airport, on New Year’s Eve, thanks to  Greg Baker and  Classic Helicopters.
Allie Dunnington of Bristol, England, the 1st runner up, introduced a total of 65 girls and women to flying throughout the year in 3 countries... In a Balloon.
Flying her own Cessna 172, Lesely Page, of Oshawa, Canada, the 2nd runner up, overcame her aversion for taking passengers and introduced 54 girls and women to the joys of flying. She and her husband, Jeff Page, conducted a total of 76 introductory flights making them the most dedicated couple.
The Most Supportive Male Pilot in the World in 2010 was Andrei Floroiu of New York, NY, United States. As a part of Andre's Fly For MS campaign, with the help of Keith Siilats and their entire FLYforMS team, he introduced 157 girls and women to flying. He allowed them to leave their medical conditions on the ground, if only for a moment, as they took to the sky.
During our record setting event at Renton, on December 5 2010, Peter Morton of Renton, WA, United States, flew a Cirrus SR20 tirelessly and continued to introduce more girls and women to flying for the reminder of the year. 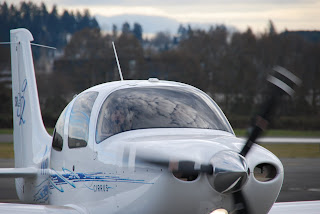 Dick actually flew 54 women. But some of our women took an airplane flight and a Helicopter flight with Emily, so he didn't get credit for all he flew. But he was our last man standing. And he was the first person who said, "Sure, I'd love to help."
In the Most Unusual Introductory Flight category, people voted and selected a winner.
With 184 votes, Clark Morawetz of Oshawa, ON, Canada conducted the 2010 Most Unusual Introductory Flight, a flight that included a marriage proposal that almost went wrong.
183 people selected Sharon Ttinkler of Tullahoma, TN, United States. Sharon introduced her best friend to flying in a vintage Luscombe 11A and ran in some problems with the tachometer.
103 people chose Sharon Theodorelos of Dayton, OH, United States, who conducted her most unusual introductory flight in 1930 WACO RNF.
“The ultimate winners were the hundreds of girls and women who discovered flying thanks to this campaign. May they fly forward the gift they received,” says Mireille Goyer, the Centennial of Women Pilots campaign organizer.
“Flying gives me the feeling of being carefree and all worries seem to disappear while in the air. Kind of like a piece of heaven looking over everyone. Again, thank you from the bottom of our hearts!” said Meredith, a lady introduced to flying in Oshawa, ON, Canada.
“She's not even two. She blew kisses to the other airplanes on the way down, and talked about the flight the whole way home. I know the experience will stay with her, and with us, for a long time to come,” said Nikki who flew with her daughter in Renton, WA, USA.

All our pilots are winners!
Your contribution is etched in history and in the minds and hearts of the women you flew. In addition to our pilot winners from above, please meet the rest of the flying team. 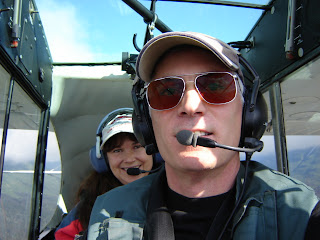 I only flew two people on the 31st -- but that gave me status to be on the pilot list.

Thank you everyone! If you haven't already done so--- click on the names in blue to read incredible stories on these amazing people. My prize was to have the opportunity to meet you all--- and remember what it feels like to fly!
Enjoy the Journey~
~Karlene
Posted by Karlene Petitt at 10:00 AM