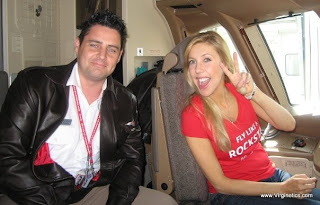 Marty and Katrina Rowntree
Nobody will never really know all that Marty has accomplished, but this is a start...

Marty began flying at age 16, earned his private pilots license at 17, at 18 joined the NSW Fire Brigade, Australia’s largest urban fire and rescue service, simultaneously working with a private investigation company to fund his flight training, and at the age of 20 he began his first commercial flying job flight instructing.

He was a chief flight instructor, instructing primarily IFR/commercial & multi-engine students, and then began formation/aerobatics training. “A good escape from the manuals.” 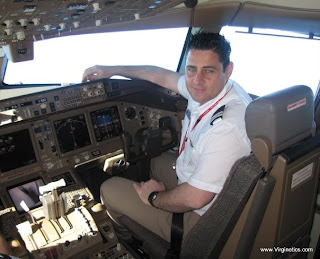 Marty hard at work
Law student turned criminologist, bodyguard in his early days, employed as a musician… he played the guitar, keyboard, flute, saxophone and more! He’s played in concert bands, rock bands, jazz bands and in his early days, a few orchestras, and continues to compose music electronically … just for fun.

His first turbine job was in “command” in an Embraer, EMB110, Bandeirante. He flew close to 2000 hours in that “magnificent machine” and prior to Virgin Australia, he had actually had never flown as a first officer. Yes… Marty is currently a 777 pilot for Virgin Australia.

Marty holds a commercial helicopter license and can be scene beating the air into submission… just for fun! He’s also flown hang gliders, but as he said he hasn’t flown any “hangy stuff” in about 4 years, but looks forward getting back into it.

And then there’s the business side of Marty: 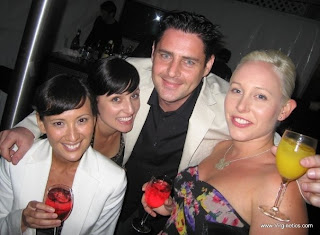 He has set up companies, including a CRM, Crew Resource Management, consulting business, spent many years in management positions, prepared manuals, instructed, and performed type ratings… in the Pacific Islands.

How many aircraft can one person fly? In Marty’s case about 40 different fixed-wing and helicopter types, including 7 turbine types.

Talent doesn’t end with his musical, flying, instructional, and management abilities … He has also written for many aviation magazines and websites under one of three pseudonyms. And there is more…

Marty spent over 4 years in the NSW Police Force, flying on his days off, worked many years in an intelligence department, and finished this career in the detective office as a plain clothes constable. 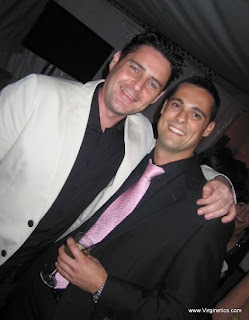 Marty and Jason
In 2005 he flew a Beech 200 King Air for the Royal Flying Doctor Service, an aeromedical service in outback, Western Australia… Meekatharra.

“It was essentially an aboriginal community with an ‘official’ population of about 400 people. After my car was broken into three times in a week I decided to leave for a job on the east coast of Oz – closer to ‘home’. I left the RFDS having made some great friends and I did some brilliant and challenging flying while there. Lots of black-hole approaches into runways lit with lanterns or car headlights, challenging weather, lots of short dirt strips etc.”

In 2005-2008 Marty held a training/checking role with a corporate company and tells me he flew politicians, including “A few stints flying their Prime Minister when Government jets weren’t available or destination airports wouldn’t accommodate them…Equivalent of Air Force 1.” This is also where he met Adam, FlightPodcast partner, and now they fly together at Virgin Australia. 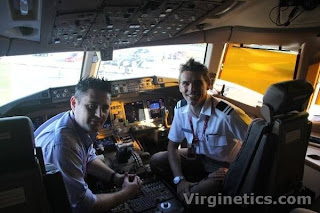 Marty and Adam
Marty was also Adam’s training captain and remembers it fondly, “Some of the most enjoyable time I’ve ever spent in an aircraft was with Adam… we had some brilliant times together. This was, without doubt, the most employee friendly company I’ve ever worked for – just brilliant. If they were based in Sydney I would never had left.” 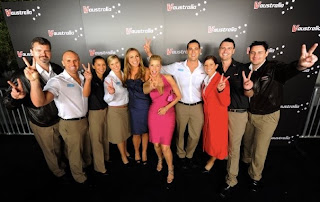 Launch Party LA
While at Virgin, he also built from scratch the Virgin Australia internal Learning Management System (LMS). He continues to manage and administer the system, and maintains a role producing training and social content for the crews. The system he built manages roster swaps, accommodation, forums, image gallery, CRM material, knowledge base, news, Usenet discussions and more… A huge system!

How does Marty feel about Virgin Australia?

“VA is a brilliant airline to work for. Great middle management, brilliant training department, fantastic destinations, amazing aircraft, and a great team of people to work with.” 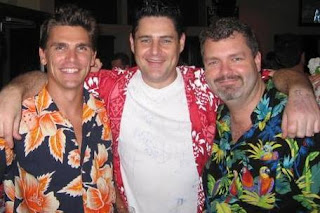 Where is Marty’s aviation Passion?

“Overall, I’m very much a general aviation person. I enjoy the airlines but nothing compares to the variety of work/aircraft in the GA environment. Individuals can have more of a profound impact on the nature of a GA operation free from layers of bureaucracy and airline politics. I enjoy the interaction with passengers and variety of domestic/international destinations in GA, however, I’m a fan of predictable airline rosters and a structured, predictable career.” 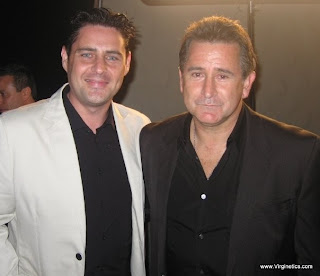 Besides his first solo flight in a fixed-wing, helicopter and hang glider, Marty’s “Experience Of A Lifetime” was a three month trip as he flew the support aircraft in the London to Sydney Air Race, “stopping and enjoying every country en-route.”

“Single pilot to London…Returned with the race judges, ATC reps, Bureau of Meteorology reps and race officials. Flew in formation with the Campell Racing Team’s Grumman Albatross (Lyle Campell & Lonny McClung) out of Bali; Flew over Sydney Harbour in formation with Ray Heiniger (who was piloting a C414 Titan; Ray had just finished up as the Chief Pilot for Qantas at the time) – bit of a buzz.”

The excitement didn’t stop there. He flew the inaugural SYD-LAX service for Virgn Australia with, Podcast partner, Ken Pascoe.

“It was a joy to fly the very first ‘party flight’ with Ken after months of preparation. Had all the airline execs, Richard Branson and other VIP’s on board. After Party in LA was brilliant, and then later ended up at Branson’s penthouse to continue into the night! Ken and I worked closely leading up to the launch and became very good friends during this period. I now consider him to be the person with the brain most resembling my own (that’s NOT a compliment!!!).”

What is Marty doing now in his spare time? 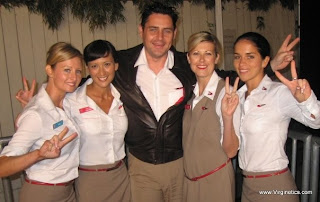 He owns and maintains nearly 250 websites… some aviation, but most are not. His current company does a lot of media work, producing some branding strategies/media content for various airlines and is looking to branch out.

Don’t mistake Marty's diversity with his commitment to task, he just, “enjoys diversity and variety" to keep him "interested and challenged.”

Marty is very excited about the future of our podcast… FlightPodcast.com He is also making a pilot TV episode for television! And his master plan is to “continue to fly and enjoy it as always,” but I suspect there will be more in Marty’s life.

Marty… when you run out of careers to try out for size, you could make a male version of Barbie, patterned after yourself. You’ll make millions on Pilot Marty, Manager Marty, Training Marty, Musician Marty, Writer Marty, and FlightPodcast Marty…and many more. They could all have their own plane, or helicopter.You’ll be a hit... Every little girl will want one!

I am very honored to know you, and be part of your team!
Posted by Karlene Petitt at 11:55 PM