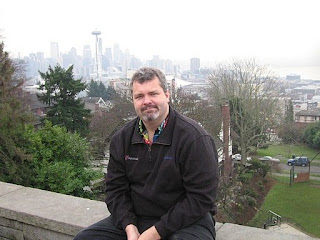 Ken Pascoe in a great city!
Ken’s aviation story began the day he was born with jet fuel in his blood. February 23, 1969, proud parents Russell and Lorraine Pascoe welcomed Ken into this world with an open door to the sky, setting an example that with hard work, he could accomplish anything.
His dad was a Flight Instructor/Charter Pilot… barman, fireman, gas bottle delivery driver, part time commando, small business operator, and I am told… much more, and I know his mother had to be a saint.
Gladstone Park, Melbourne, Australia, was home, and his parents literally built a house under Ken. He sat on the roof and watched aircraft takeoff from Essendon and Tullamarine Airports… dreaming of the future, as they worked below.
While his classmates at Gladstone Views Primary School focused on their studies, Ken found himself at the airport. By the time he was 9, he was sitting in the back of a Cessna watching his father instruct at country airfields on the outskirts of Melbourne.
“According to legend I could start, taxi, takeoff, fly a circuit and land by the time I was 10 – as long as I had my cushion that allowed me to reach both the controls and rudder pedals, as well as see out.”

Attending Gladstone Park Secondary College Ken was introduced to computers, and from the age of 12 he worked his way through a series of them. This included programming, and “occasionally taking them apart, less occasionally putting them back together.” During this time, his father started a flying school/charter company at Essendon Airport, and gained permanent employment with IPEC Aviation.  Ken finished Secondary College with strong English/Maths/Science theme and good marks for university entrance and a private pilot’s licence.
Ken furthered his studies in Computer Science at RMIT University, Melbourne, while he completed his Commercial and ATPL theory, earned a Commercial Pilot’s Licence, Multi-Engine Instrument Rating Instructor Rating, Twin Training Approval and an Instrument Rating Training Approval. Despite the fact Ken enjoyed his courses and gained excellent skills in computer sciences, he knew this wouldn’t be his career, and in 1989 he left RMIT to pursue a career in aviation.

Part time work at several businesses (aviation and other) Ken supported his “flying addiction” by developing and implementing various hardware and software solutions.
When Ken’s father moved overseas, Ken took over and managed the flying school/charter company. They had 12 training aircraft…single engine piston through multi engine turbine on property. In addition to general charter they had several government contracts…Vic Lands department aerial survey, RAN target towing, Vic Govt VIP charter.  And before he left the company to join Cathay Pacific, he served as Chief Pilot.
Ken joined Cathay, which commenced with 6 months in Prestwick studying for the British ATPL and “re-learning how to fly a Seneca II in UK weather.” 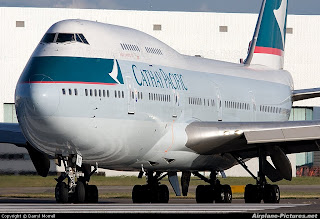 During this time his first son, Lewis, was born. Ken then served as a Second Officer for almost three years on the Boeing 747-400 flying to various ULH destinations from Hong Kong to Australia, the UK, Europe, the US and Canada. Due to finances and lack of career progression, in 1995 he moved on.
1995: “This year saw me marking time in my airline career, living in Tamworth and flying Metroliners for a small RPT carrier.”   Once again Ken put his computer science background to use and developed a flight and duty time/rostering application for the airline, as well as an automated solution for producing takeoff performance charts for the Metro.  A brief sojourn in Darwin, he flew and instructed on the Metro before heading off to Emirates in February of 1996.
As a First Officer on the A310/ A300 he experienced what he called a “short but enjoyable, career flying to a gamut of destination in the Middle East, Africa, Asia and Europe before being noticed for my IT skills.” 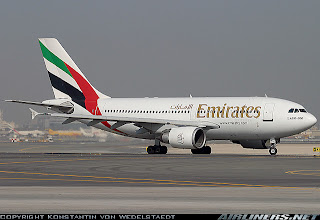 It wasn’t long until he began working closely with management pilots at Emirates, and ultimately developed an award winning fuel monitoring software system which reduced their fuel costs significantly during the first year of implementation. He also built and sold computers to other pilots and individuals in Dubai, wrote a software system to format company rostering information into PDF and calendar files for pilots, and “a few more odds and ends.”
Lewis was joined by Griffin (1997) and Ruby (2000), and Ken became involved as a progenitor of a Training Management Information System (Athena). He eventually served as project lead (Module Integration and Reporting Systems) and ultimately the head of the Athena project. He transferred from Airbus to the Boeing 777 in 1998 and, “never looked back.”   He upgraded to Command in 2001, and joined the Training Department as a Sim and Line Training instructor in 2003.

One Big Engine!
2010 was a significant year when he left Emirates and joined Virgin Australia in 2010. As a Check Captain at Virgin, his responsibilities were many.

"The man's a magnet"
Ken became responsible for the SOP development along with a raft of training documentation aimed at development of their CRFO’s and standardization of line and training pilots.
Because of his International and Boeing777 knowledge, he was contacted by various people in Virgin to assist in a variety of ways towards their launch.  During this time he and another pilot developed a learning management system web site, with social networking components, for the delivery of training material and examinations to Virgin crew.
Ken was the delivery pilot for the first aircraft, as well as for the inaugural SYD-LAX-SYD service. 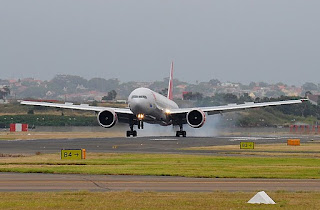 If we had to sum up Ken’s talents and abilities, they would have to be his ability to think laterally on problems, coordinate projects and developments on both a large and small scale, as well as manage teams. He also has the strength in being able to focus sharply on individual problems in order to achieve tasks, while maintaining the big picture. Oh…and not to forget his superb piloting skills!

Superb PR Skills
Once again…I am honoured to be on the FlightPodcast team with yet another outstanding individual.
Posted by Karlene Petitt at 11:47 PM