I have many memories of significant moments from my aviation career. Some of them are from stressful situations, like barely passing flight evaluations--I’ve had my share of close calls. Then, there are the memories of epic events like when the ADF needle locked in to Midway Island after taking off from Adak a few hours earlier. Of course, there are good memories that I cling to simply because they’re wonderful. An early one of those was a trip I made through New England during peak fall color back when I was brand new to aviation.
The pilot I flew with called it a “leaf check.” I remember it fondly. 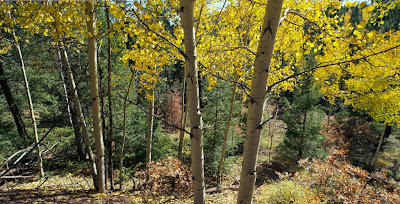 In the mid-80’s, I was a Weapon System Officer (WSO) assigned to a reserve F-4 unit in Dayton, Ohio. None of this is terribly interesting except, being a reserve unit, it was populated by relatively senior folks. When I was assigned to that unit I was, by almost six years, the youngest person. Most of my squadron mates were veterans of the Vietnam war. Some of them had flown the F-100 and F-105. Some had well over 4,500 hours of fighter time, a large amount by the standards back then, an impossible amount by today’s standards.

Me? I had lots to learn.
Since I was totally wet behind the ears, I was adopted by a couple of these veterans. One of them especially liked the immersive quality of flying, in that through aviation he could see more of the world. What I mean is, he liked looking around and admiring the scene when the mission allowed. One thing he did every year was what he called a “leaf check.”

“Hey Tom. What are you doing over a weekend the middle of October?”

“I was wondering if you wanted to go cross-country up through New England. I need a WSO to go with me for a leaf check.”

Not necessarily knowing anything about what a “leaf check” was, I was up for anything. 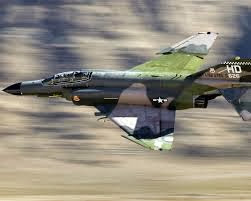 A “leaf check” was essentially a relatively low altitude flight at sauntering speeds in an F-4. The speeds and altitudes were all about admiring the awesome New England colors at peak season. In our case, we planned to fly high altitude to Maine. Then, we planned to descend to a much lower altitude so it was easier to see the trees. Our plan was to make a big clockwise circle around the state a couple of thousand feet above ground. Eventually, we’d make our way down to Pease AFB in southeastern New Hampshire, where we'd spend the night.

To do this all in one flight, we arranged to meet a tanker in Pennsylvania to top off our tanks. Fortunately, a tanker was already servicing other fighters about the time we wanted to be in Pennsylvania. It was just a matter of coordinating our turn on the air refueling boom. 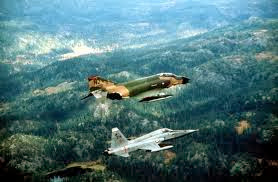 You couldn’t have asked for a better leaf checking day. The skies were crystal blue, embedded with high cirrus clouds. Of course, we had no way of planning such weather when we started scheduling this trip. We had to “request” the aircraft for the weekend weeks in advance. We were lucky the weather cooperated. It could easily have been raining, making the whole trip worthless.

After hitting the tanker, we descended into what I'll call the “low altitude” structure--anything less than 5,000 feet above ground. We were cognizant not to accidentally fly over people's houses at the risk of getting a phone call back at base from an irate person claiming a “loud, smoking jet aircraft” had disrupted their quiet afternoon. We weren't too terribly low since we weren’t on an official low level route. Flying at true low altitude conditions (around 500 feet above the ground) at tactical speeds would've detracted from the point of the flight, admiring the leaves. Instead, we sauntered around Maine in a clockwise flow a couple of thousand feet above the ground. 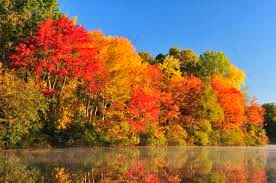 The colors against the blue sky were spectacular. I didn’t realize this then but now I know the character of light during the fall in places up north is totally different than during the middle of summer at high noon. The light during the fall has a polarizer feel to it. Add in yellow, bits of red, and a beautiful blue sky and you have all the ingredients of a picture perfect scene, which is exactly what I saw.

Of course, there was good training going on. We had our maps. We used our clocks. We already mapped out where we wanted to be and approximately the times we needed to be where. This is well before the GPS revolution so visual navigation still dependent on the basics; map reading skills, a clock, and looking out the window. It was good experience since the point of the mission was to look out the window.

(Side note commentary: With the advent of GPS technologies, I’m not so sure our new aviators aren’t developing skills (important skills) we used to need simply to survive back in the day. I’m pretty sure this isn’t a good thing. I’m not thinking this is bad because we might lose GPS someday. I’m thinking it isn’t good because inherent situation awareness that’s developed through years of manually knowing where you are is becoming a lost art. That’s not good on many levels.) 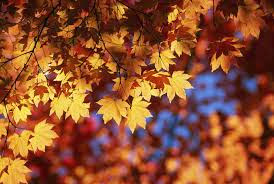 Interestingly, even though I flew this mission over Maine almost 30 years ago and have a great memory of it, I only set foot in the state a couple of years ago. It was my last state, the last of the 50 states for me to set foot in. I happened to be on an epic motorcycle trip through New England at the time. I remember crossing the border thinking about the last time I’d been in the area on that mission. It was a good fall memory.

I’m writing this as we’re about to hit peak color season in the upper elevations of the Rocky Mountains, where I live now. I hope to find time to check out the color both from the air and on the ground.

Tom
www.tom-hill.biz
Posted by Karlene Petitt at 12:00 AM