Inspiration In The Sky!

Dream. Believe. Achieve.
Three words to an unlimited future...
We met Melissa Huffman a year ago as a Friday Flyer. She was a student pilot who had started flying in September, 2012. And look at her now. She soloed! I am so proud of all she has accomplished and I know all her dreams will become a reality because of those three words above. She is making it happen despite the many struggles and challenges we all face called life. 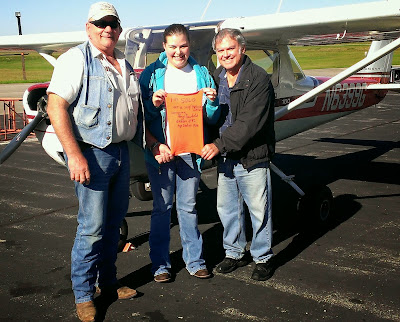 
"Hey! So my solo went amazing. Me and the manager (Ray) aired up the strut and put a little more oil in before my instructor got there. Well he said, are you ready to solo? I said what no way haha. Because my parents were in Pennsylvania celebrating their 26th anniversary and I really wanted them to be there to see me solo and they did too.
Well when Tony (my instructor) got there he said yeah well ... You never know when we will have another nice day with no wind. (We had to cancel 4 times prior because of the wind) so he said lets just see how it goes and go from there. So we got in the air and did 3 touch n go's and by the third he said ok, you're ready, drop me off at the intersection and ill get in rays truck. 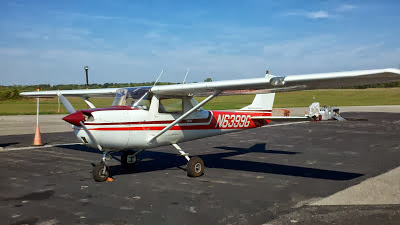 So 4 guys all there by the runway watching me :) and they were doing construction on the RSA areas at both ends of the long runway 31,13 so they opened it just for my lesson. When I took off taxiing I smiled and gave them all a thumbs up and they did the same.

When I took off it got up into the air soo much faster! All my worries just went away and I flew the plane! It was amazing and such an overwhelmingly awesome feeling. All on my own! Finally! I waved at them each time taxiing back to take off again. After my first my instructor came on the radio and asked how it felt I said really good. He said well you looked good. I said thanks , I had a good instructor and he just laughed. By my third take off I was loving every second of it and didn't want it to end.. I contemplated doing a go around just to stay up longer haha.

When I landed I had a couple of the older pilots waiting to congratulate me. I was so excited! Jumping up and Down like a little kid hugging everyone. Coolest feeling ever! I had finally soloed! on runway 31"  Melissa
Join Me in Congratulating Melissa!