Last week I received an email from Steve Slade with a great reminder about complacency and how easy it is to get into routine where mistakes happen. It's not if... but when.

"This Wednesday our local commuter here in Homer decided to try and new landing technique. I guess not too new, as we have seen this many times. ERA says the landing gear failed. Ya right. All three independent gear assemblies all failed at once. A friend of mine made the comment that "how could this happen with two pilots and a checklist?" Valid question. I think that question has been asked a thousand times throughout aviation history. 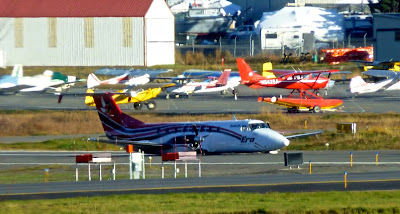 My answer? Complacency. I think complacency is one of the most under estimated, under recognized hazards to aviation safety. These commuters take off and land at the same airports hundreds of times a month on little 20 to 30 minute flights. You tend to go on automatic mode.

When I flew I found myself on personal "auto-pilot" many times. I was flying, doing just fine, but my mind was on a beach 3000 miles away in the Caribbean or insert whatever your favorite personal daydream is. Then again, we also find ourselves doing the same routine duties such as take-offs and landings that we feel since we have done the same thing, in the same place, a 1000 times, that how can we mess it up. Right?

Having jump-seated many times I can see where complacency would be a bigger danger to airline pilots vs. and average helicopter pilot. We are up and down, around, dodging weather, multiple landing is many different places. A jet takes off and lands a lot of times only once a day.

Commuters may do it multiple times a day. Especially in the same area at the same airport. Their day tends to be very routine and that's where the danger lies hidden. We tend to think that since it is routine, that it makes it bullet proof to mistakes. But contrare, that is what makes it one of the most dangerous attitudes to slip into.

I think every pilot has felt like last month was like the old movie "Ground Hog Day." You ask them about what they did three weeks ago and it is exactly the same what they did this week. For an office worker, that is fine. But not for a pilot. Every take off, every landing has to be approached with the same precision you did it when you were first taught.

You never overcome it. When you think you have, that is when you are the most dangerous. It has to be recognized as your mortal enemy and defended against every time you strap that 10 ton flying machine to your ass."

Steve apologized for the rant (unnecessarily) But he has lost too many friends to complacency and thought maybe we could "highlight something we pretty much all know but need to be reminded from time to time."

"This time it only cost a ton of money and with airlines tight bottom line, the costs only get passed on to you and me. But these pilots might not be so lucky next time and could costs things money can't buy.... Besides, it really looks bad on a resume..." Steve Slade, from Rotor Apps

What do you do to keep complacency
out of your plane?

Have you ever gone on personal autopilot?

Enjoy the journey!
XO Karlene
Posted by Karlene Petitt at 4:28 AM