THE ARTISTRY OF FLYING

I struggled a little bit this week figuring out what to write about. I keep a list on my iPhone of ideas for subjects. When I think of a possibility, I write it into my phone for review later. Mostly, my ideas for what to write about simply come as I start putting "pen to paper." Today is no different. I wanted to write something about every pilot being exposed to acrobatics and other dynamic maneuvering. As I started to type I thought, "Let's talk more about the basics of why such training is important." That led me to think about today's topic, which is how flying is artistic. 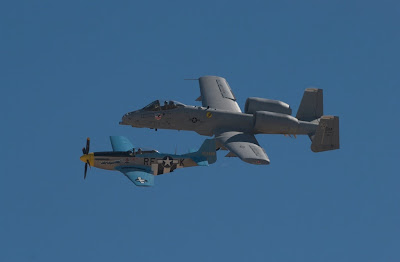 I had a supervisor, the Commandant of the USAF Test Pilot School, say something about flying that was very insightful. He was an engineer, the only engineer to hold that distinguished position. Being the supremely intelligent man that he is, he would ask basic questions about the nature of flying that we pilots mostly took for granted. On this day he asked for my thoughts about whether I thought flying, specifically piloting, was by its nature artistic. I hadn't thought of that before but immediately made the connection.

I believe it is. As many controls, regulations, rules, and automation we might put into flying, at its core, piloting aircraft is artistic to the same degree as painting, playing an instrument, or being a photographer. Each of those vocations can easily be regimented--e.g. paint by numbers--but we rarely discount their connection to being artistic. Piloting, on the other hand, is not commonly connected to an artistic nature.

All of us have been to airshows and watched the headline demonstration team show off their skills. As much as I ooo'd and ahhh'd at their shows as a kid, I developed a new level of appreciation when I learned to fly at pilot training. After I learned the basics of aviation, a new window to the details of flying such demos opened up. The dozens and dozens of considerations, analyses, and decisions that go on every moment during such a demo are mind-boggling. Something as routine as quickly rejoining far flung aircraft involves amazing numbers of considerations and aircraft parameters to be worked through. Yet, these teams do these things so expertly as to make it look simple to the casual observer. We pilots know differently. With so many variables at play, it takes a good dose of "seeing" the solution to make these things happen. "Seeing" is a pretty necessary skill for any artist. 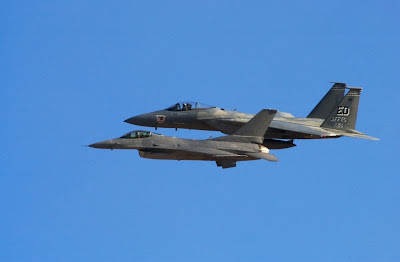 When I was the Edwards AFB F-15 demo pilot, the flight profile I flew was very scripted. Everything about it had parameters that had to be met to ensure proper safety margins were always in-play. To the outside uninformed observer, the long list of airspeeds, altitudes, and aircraft conditions were totally transparent. Yet, as pre-defined the profile was, it took a level of "expertise" to tackle the profile expertly. Even with all the pre-planning weather conditions would creep in requiring adjustments to the parameters to keep the profile as perfect for the viewer as possible. It was always the little things that made one demo flight better than the next. It's the same as a virtuoso playing a classic arrangement many others played before. Artistry is at work.

Some people out there may not understand how I can connect flying to artistry. Some of them might think flying as simply a matter of procedure. They may think flying is simply a matter of making planes idiot proof, training only a matter of learning perfect procedure, and discipline merely doing the right cookbook procedure at the right time. This might make sense in some situations but if you never understand the limits of such a perspective you're doomed to be surprised when things don't go right. If you know and understand that flying is more than simple procedures, there's a hope you might "see" solutions for unexpected situations. Artistry like flying is about developing great skill.

Artistry is a funny thing. It's so difficult to put a finger on what art is. Like anything that's based on subjectivity, it's hard to define quantitatively. But, just because something is hard to define quantitatively and is difficult for actuaries and accountants to accept, it does not mean it's not important. In fact, artistry might be the most important thing of all.


Cheers
Tom
www.tom-hill.biz
Thank you Tom! This could not be a better week for this post. Monday we had the art of soaring, Tuesday is the art of giving back. Wednesday Aviation Art. And today... your beautiful piece on the Art of flying. Tomorrow another pilots makes art of another kind.

I can totally see how you can connect art to flying. I've flown with artists who paint the sky, and have flown with those who operate mechanically. There is a difference.

Enjoy the journey!
XOX Karlene
Posted by Karlene Petitt at 12:00 AM