Spread Your Wings and Fly 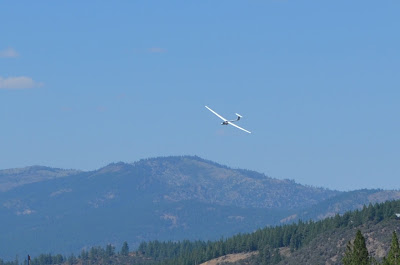 "You may not know where you're going, but you know that so long as you spread your wings, the winds will carry you.”


I have decided to spread my wings to find a solution for the three primary problems facing aviation today. If you have not heard what I'm doing... click the Future of Aviation.

“In the automated world we now live, glider flying will be far more beneficial acquiring aerodynamic skills and a scan. This will produce a generation of pilots who can fly a plane beyond managing the computer. They will build a solid foundation.”

This will also be the foundation of my thesis as I earn a Ph.D. in Aviation Safety. 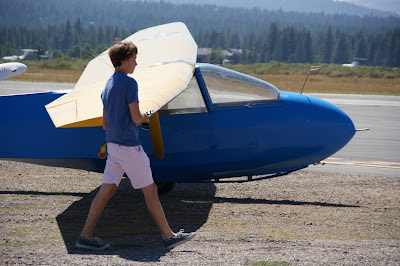 But today is about a reaction to the inspiration of flying gliders as a solution to our future. After posting that article, all sorts of comments popped up. I have to admit, the following comment is one of my favorites. Please welcome Swayne, and soar with the inspiration of this young man

After reading your article, and being in Lake Tahoe for vacation this summer, I thought it would be the perfect opportunity to see what glider flying is all about. Truckee, California and the surrounding mountains are known for fantastic gliding. I scheduled my first glider lesson with Soar Truckee, out of the Truckee-Tahoe Airport (KTRK), for an hour, on August 3rd. I was nervous and excited to try a completely different type of flying. 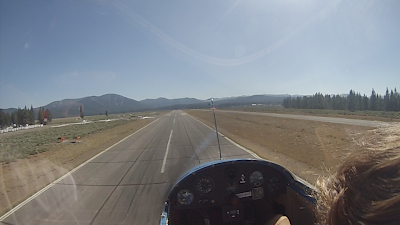 We were to fly in a Schweizer SGS-2-33 (N65825). This training glider first flew in 1965. It is nearly 26 feet long and has a long wingspan of 51 feet. This glider doesn’t exactly look like the modern, swooping gliders that many people envision. 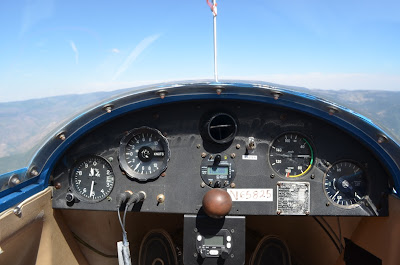 Before I knew it, I was getting all strapped up into the glider and got my GoPro Camera set up on the canopy. Right after I closed and locked the canopy, we were on the roll! One really cool thing about flying in a glider is that you will be in the air often before the tow plane is! 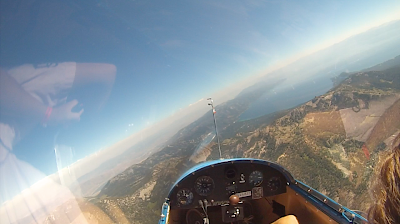 The first thing you'll notice flying in a glider is how quiet it is. After having done all of my training in a powered aircraft, it was completely different flying in something without an engine. We were released at about 9,000 feet (3,500 feet AGL) and eventually climbed through thermals to an altitude of nearly 14,000 feet! That's almost at the point when oxygen is required! 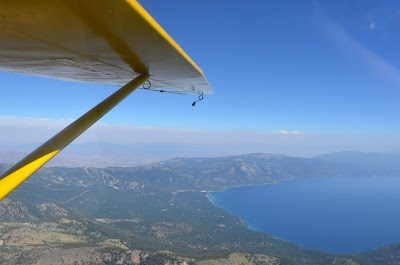 I would be lying if I said all went well for me during the flight. I got pretty nauseous from the spinning, which was required to fly up the tight thermals. There wasn't a whole lot I could do about it besides look at the horizon and breath deeply. When we would fly straight for a period of time, that bad feeling would go away. 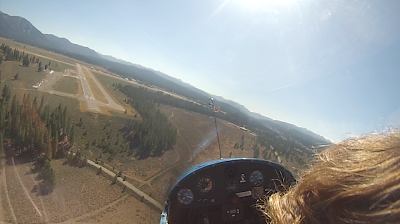 After reaching nearly 14,000 feet, the instructor got me to take control and feel the way the glider would fly. Because I wasn't flying in any thermals, we descended a few thousand feet over a period of time. At that point, it was me who was going to do some thermal flying. One strange thing for me was that I felt a lot better spinning if I was the one in control. My body could expect what was coming motion-wise. I didn't ever really feel bad when I was the one doing the thermaling. That said, the views of Lake Tahoe, Donner Lake, and the surrounding mountains were incredible from 14,000 feet. I loved being able to see many of the places I grew up vacationing in from a different perspective! It was especially cool to be circling up a thermal with 2 or 3 other gliders! 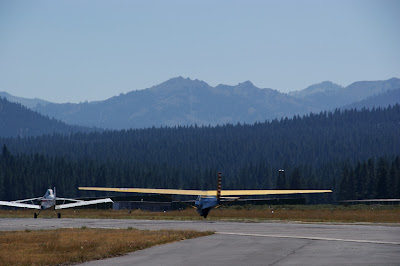 After exactly 1 hour of flight, it was the right time to head back to the airport. Going through the pattern and landing was pretty interesting. Being in the front, I controlled the spoilers when he would ask for them, other than that, all of the controls were with Jan. When you're in a glider, you come in high to make sure you have enough room to land safely. Touching down, we pulled off to the left into the pullout area and leaned the plane forward, where the brakes are located. 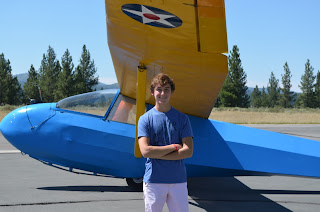 Overall, I had an amazing first glider experience. Getting used to the thermaling took awhile, but it wasn't anything too bad. I would recommend Soar Truckee to anyone in the Lake Tahoe area. The people are so welcoming and always want you to have a good time. I promise you won't regret taking your first glider flight! The “stick skills that you’ll develop are extremely valuable! 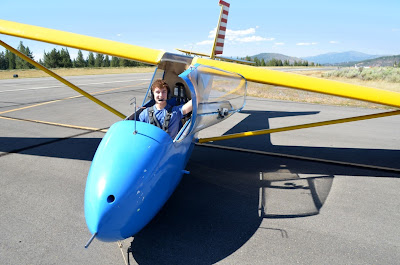 So back to Karlene’s proposition… After experiencing my first glider flight, I now see what everyone has been saying about how gliding improves your “stick skills.” I truly believe that even after only 1 hour of flying, I got a great feeling for how thermals work and feel. The “bad” feeling I got from thermaling/spinning wasn’t really “typical” for someone to feel. It was a combination of our very high altitude, the fact that I was with an ex-fighter pilot, and that we were in an older bird. Even with that, I’m still hoping to move on sometime and get a glider’s license – that’s how much I think it would help develop my own skills as a pilot.


The flight I took was cheap in comparison to how much it would’ve cost to do a powered flight up there. Technically, because there are thermals, we could have stayed up for many more hours. Once one has the license, they could pay for a tow up charge, and a low rental fee, and fly for hours and hours! 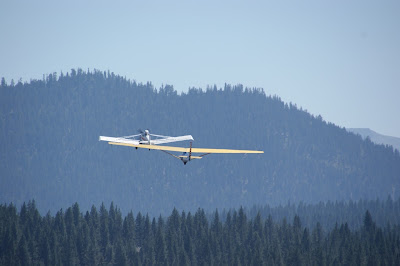 So, in conclusion, I think that Karlene’s proposition could be a very legitimate one. What could be better? – You’d be training better, safer pilots, in a MUCH more cost-effective way!


For those of you who may not know who I am: My name is Swayne Martin, I’m a student pilot out of Richmond, Virginia, who created the website “From Private to Professional Pilot” - http://martinsaviation.blogspot.com/. I now have over 20 hours flight time, in 8 different aircraft. I soloed when I turned 16, after 4.5 hours of flight time. In addition, I just recently completed my first cross-country (point A to point B over 50nm) flight with 14 hours flight time. The mission statement of my website is as follows: 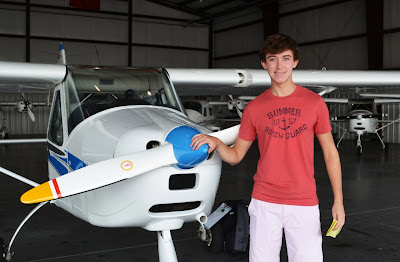 “The goal of my blog is to show the steps which I will be taking over the next few years in my pursuit of a Professional Pilot career. I show step by step my path towards this goal, beginning with my first Flight Lesson. In addition, I will show you what inspires me in aviation from the people I have met to the flights I have taken. Along the way, I hope to inspire young or new pilots to follow their passion and take it to the next level.”

Swayne, thank you for the great post. So a bit of trivia… I drove past this exact location numerous times a few months ago. I had said to my husband, “I want to go fly a glider there!” But time was not our own, as we were babysitting our grandkids, and taking them to and from the wedding venue, and then needed to hit the road early to drive to Seattle. So I didn't at that time. But I will.


What do you think about this idea?
Have you been inspired to fly a glider?

All photos and videos compliments of Swayne Martin.