There was nothing normal about February 13, 2011. Erika taxied her plane onto the runway and stared out the window for only a second before she pushed in the throttle for the first time alone.... 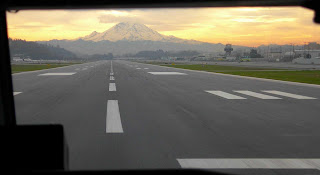 I asked Erika what it felt like to fly solo. Her words speak volumes.

"Surreal.  As my instructor was getting out and about to shut the door, a tiny part of me wanted to yell "wait!" -- but it was too late!  The door shut and I was on my own.  I took off to do 2 touch-n-go's and a full stop at PWT.  I felt nervous and unstoppable at the same time. I think I said "Holy shit" about 10 times and laughed like a nutcase.  Hope my finger was off the mike....

It was strange looking over at an empty right seat, and a little lonely even, but really.....words don't do justice to the feeling of piloting a plane all by yourself. "Pilot in Command" is a very apt term. You're running the show, you know?  There's no pulling over to the side of the road, no freaking out....you just incorporate what you've learned and do whatever it takes to fly the plane.   That's a hundred self-help books rolled into one 15 minute trip around the pattern.  Nothing can compare to what it does to your soul and your self-reliance.  Nothing.  Which, I don't need to point out to you, is immensely powerful for girls and women especially.

Jeez....I didn't get weepy during/after my solo yesterday (think I was too out of it), but I kinda am now!  It's just powerful and wonderful.  And something else?  I realized just a few weeks into my training -- both flight and the self-study on the ground stuff -- that I would do all of this....the investment of time and money and all that....even if it meant I'd never fly after certification.  Of course that's not my preference, but that's how powerful the learning process has been so far.  I don't have kids, but if I did and they had any interest in aviation whatsoever (obviously the desire has to be there), I'd do whatever I had to to foot the bill for them to fly.  Again, it's that powerful a life transformer.  I wish I had done this 20 years ago, but hindsight is what it is."

Tom Gwilym one of our amazing pilots at our Centennial Events, took Erika for her first intro lesson a few months ago. He did count her for the Women's Centennial of Women Pilots, and now she is out there on her own!

----"I'm her "mentor" instructor since she is flying out of a club at Boeing, but I've given her tons of advice "flying" the Starbucks down in our office lobby.  I was hoping on being there for her solo to take photos, but I was flying with a student over Kent and she was at Bremerton, so I just greeted her over the radio."  Tom--- you were there.


Erika is having a relationship with her plane...


"I love that little plane.  It's got its quirks....the flap indicator tab broke, so someone took a blue ball point pen and wrote in " 0° "  so we can tell at a glance when the flaps are fully up.  And the left seat door didn't open from the inside for a few flights (had to stick my hand through the window and open from the outside.....it's since been fixed), so I was calling it the Happy Days plane for awhile -- as in Fonzie or Richie Cunningham taking girls on dates and not being able to get the car door open for them.  But of course, all FAA-mandated safe and maintained and all that.  Corroded in spots, dented here and there, and man I love that little thing!  Always pat the cowling a bit after I land.  I can totally see how people have trouble selling planes -- and here I am only having rented one here and there for a couple months!"

Congratulations Erika! I'm looking forward to seeing you on March 13th~ Women of Aviation Worldwide week Renton Airport event, and I hope you'll take me flying one day. Fly safe. Keep smiling. Don't let this feeling lapse---nobody can ever take it away from you.  Thank you so much for sharing your great experience. And watch out for that "No Fly" zone. 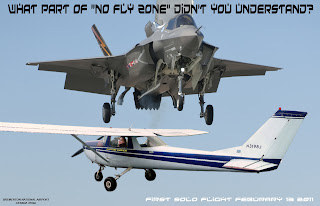 ~ Karlene
Posted by Karlene Petitt at 8:49 AM