Twenty-two years after Darius, Girenas, and the Lituanica found their final resting place a twelve year old boy heard the story of their great flight and tragic ending.  Fascinated with the story and aviation, his life found direction.

Inspiration comes from all sources. But this young man's interest in the Lituanica fueled the story that became his life.  Julius (Jay) Sakas, consumed with the passion of flight, grew up to become an airline pilot. but the story of the Lituanica consumed his soul.


Many pilots have since accomplished the great flight of the Lituanica-- notably Vladas Kensgaila's flight on the 50th anniversary in a replica. But that wasn't enough. There was an airline pilot that had one item in his bucket list--- to make the flight of the Lituanica in the original aircraft. How is this possible?  Never underestimate the power of a dream.

The wreckage of the Lituanica resides on display in the Kaunas War Museum in the condition she was found in the woods seventy-eight years ago. But there is a way to resurrect an airplane as an original. Either the data plate or a component part of the original airplane is required. Unfortunately, there is no data plate for the Lituanica. Because she'd been heavily modified for the flight, it had been removed because of her certification in the restricted category. Where to go now?

Jay's plan --- to find a sister airplane to the Lituanica. Then utilize the concept of installing a major component part of the original airplane into the sister ship. Combined with the proper documentation, she could be certified as the original Lituanica.

The search began as if Darias was looking himself.  In Jay's last years of travel as an airline captain for Northwest Airlines, he searched everywhere for the sister ship---From the tundra of Alaska to the mountains of South America. He forgot to look in his own backyard. 180 miles from his home in Sequim, Washington, he found his dream the sister ship in Oregon City, and she was only "four" serial numbers from the Lituanica. Despite that the plane was in pieces and had been highly modified over the years, restoration was a possibility. Jay purchased the lifeline to his dream. 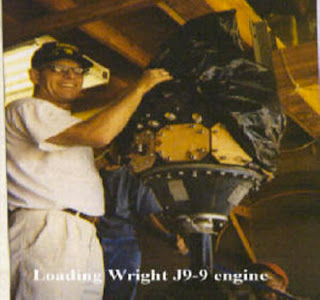 Through extensive research Jay soon discovered the Lituanica's US registration number was still available. Nothing short of amazing. N688E now resides on the sister ship. The Lituanica was originally NC688E but, due to modifications made on the aircraft, changed to NR688E. Today she would be classified as experimental.

Over the previous twelve years Jay has been working hard to assemble and bring the sister ship to Darius and Girenas' specifications.  He says, "Work has been slow. When you have money, there is no time and when you have time, there is no money."

Jay recently moved his baby to the the Port Townsend Aero Museum, a "one of a kind" restoration facility. "There are a lot of things that need to be done that exceed my expertise. I had to find people who could perform those tasks---Cutting, welding, fabricating and locating parts."

The Port Townsend Aero Museum specializes in restoring antique aircraft to a flyable state, and employs at risk youth, willing to learn. Jerry Thoute, a retired United Airline Pilot and former Army drill instructor, brought together a group of these young people and teaches them the art of aircraft restoration.  Their work is proudly displayed in the museum, and all flyable. Jay has left his plane in good hands.

He has two-years before his beloved Lituanica must take to the sky to complete the flight she started 78 years ago. The story cannot end here, but he is at the turn in the river without a paddle.