Breeders Cup, the Super Bowl for horse racing, is about to begin~ 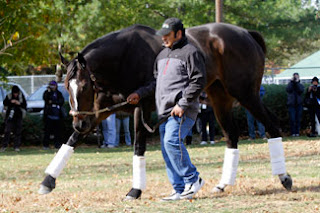 Zenyatta
Today, 4:10 p.m. EST, a field of 12 will be arriving at the gate.  Post time for the Breeder's Cup Marathon, race number 1 of 14, with a $500,000 purse.  Nerves on edge, feet stomping, coats glistening and ears back--  and that's just the owners as they watch their babies loaded into the gate to compete in the Olympics of horse racing. First 6 races today and 8 races tomorrow will complete 2010 Breeders Cup racing.

Race two, today, the purse is $1,000,000, and the prizes go up to the Classic where Zenyatta will be competing for $5,000,000 tomorrow.   But it's not the money that the owners think about as their babies step onto the track. So much can happen during that mile and a quarter run in 2 minutes.  All I thought about when we had horses running is that they'd come back in one piece. I don't own Zenyatta, but I will feel the same worry for her until she's safely standing in the winners circle. 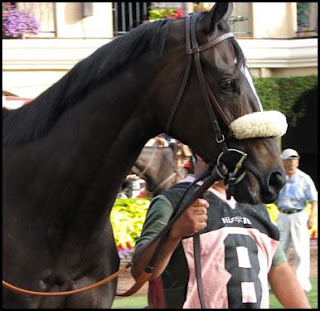 Zenyatta, a six-year-old mare has "never" lost a race. She is already a hero. Winning all 19 of her races, she ties the record for the most consecutive wins in history. She also holds the record for being the only Mare to win the Breeders Cup Classic.
Tomorrow, the last race at Churchill Downs with Mike Smith piloting her and owner Jerry Moss watching, she is about to break the record for the most consecutive wins in the world. Not only will she beat the record for consecutive wins, but she will also be first to win the Breeders Cups Classic twice!
An outstanding mare,  Zenyatta, with her trademark strut-- right and left foot, loves to pose. She also loves to make us nervous coming off the pace. She will come from behind, but she always manages to get there in time. 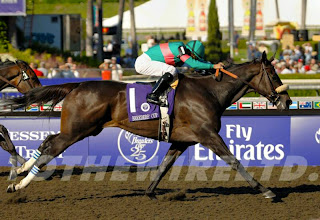 Good luck Zenyatta, Mike, and Jerry. We wish you all the racing luck in the world-- everything else, you've already got.
This will be Zenyatta's last race, win or lose. In my mind and heart, she is already a winner!
Enjoy the Journey,
~Karlene
Posted by Karlene Petitt at 8:08 AM