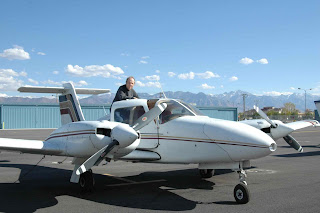 Patrick belongs to the sky--- He's either studying it, falling through it, or flying in it.
His first flight with destiny was at the age of 11 in the right seat of an Aztec that he called Snoopy because of the big nose. Around that same time he also attended a Boy Scout meeting--- of course that would be the natural progression since he'd been a cub scout for years. At this meeting he learned that the boy scouts slept in tents on the dirt. Then he learned of the Civil Air Patrol--- "They let you fly planes!" Tough choice? Patrick never attended another scout meeting.
He started taking flying lessons in 1969, at Mt. Home, Idaho. He was in his first year, of what ended up being a 26 year career, in the Airforce, stationed at Mt. Home AFB. He didn't have a degree so he couldn't fly in the service. But that didn't stop him. He just went off base to fly. It wasn't until Vietnam when he found the free time to take ground school training. Begging for flights, he managed a few right seat rides. Not much flying happened during that time, but he did complete his ground school--- a huge accomplishment.
When released from active duty he moved to Tulsa and spent a year and a half at Spartan School of Aeronautics getting his private, commercial, instrument, multi-engine and CFI --- Thanks to the GI Bill's generosity toward flight training. He used it well.


Patrick has been skydiving since 1965. He's also a proud member of SOS--- Skydivers Over Sixty! 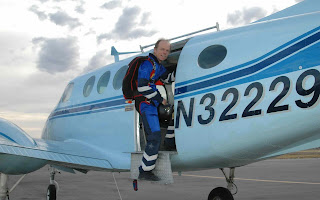 Skydive Utah KTVY
When asked what his most memorable flight was, he shared a beautiful story. It's clear that his family is blessed with a sense of humor. Even after passing.

"I was taking my mother and two half brothers up to drop my grandmother's ashes out over the home ranch in Bullion, NV. Weird thing about that flight, when we opened the window and tossed out the ashes wrapped in newspaper, (in newspaper to keep them from blowing back into the cockpit) the whole package flew back and hit the horizontal stabilizer. It popped open so the ashes flew off but the newspaper stayed until we go back on the ground. Mother said it was because grandma was a way ahead of her time environmentalist and there was no way she was going to let us litter the ground with newspapers."
An amazing man, he's also spent a couple decades working at the the Hansen Planetarium in SLC, and now volunteers for NASA. Word has it there is an asteroid recently named: 4009 Wiggins. 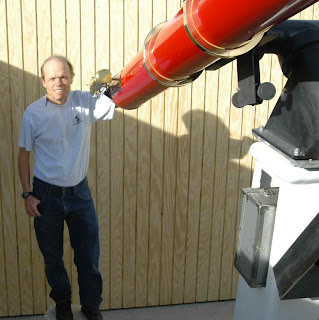 Patrick and the telescope that he donated
to the local astronomy club
What is Patrick doing now? He's helping support Centennial Of Women Pilots.  When I asked Patrick what his driving force to support women and honor this 100 year anniversary was, he said,

Catherine and Abigail
"I can answer that from different levels. One is that I think it sucks that only 6 percent of the pilots in the US are female. Mother raised me to believe in equality of the sexes. So maybe I can do something small thing to help remedy that. And then there is the bachelor in me that keeps hoping he'll find some aviatrix out there willing to spend time in the sky. Not that I've had much luck with that considering the only the double X chromosomes I've taken up for the "Centennial of Women Pilots" this year have either been married or too young. C'est la vie."

Not that I profess to be a dating service, but ladies, I don't think you should let this guy get away.

Patrick, thank you for encouraging women, supporting the future astronomers of the nation, and for demonstrating to men that it's never too late to jump out of a plane!


Don't forget to FLY IT FORWARD  We need your help. Time is flying.