It's never too late to learn to fly-- all it takes is courage to change your life. 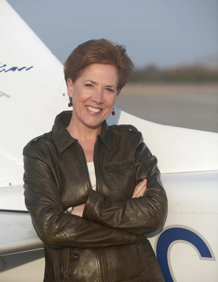 Lesley Page
A young wife. A mother. Lesley climbed the corporate ladder. A divorce. A new marriage. Nothing stopped her pursuit of the corporate dream. She proceeded to work 60-70 hours per week-- She was on a merry-go-round moving full speed. Watching her life go by.

Her first inkling that life was too short, was when her mother died from breast cancer at the young age of 53.  But it wasn't until years later in the spring of 2005, a few weeks before her 50th birthday, that she realized that she was missing out on life. Her husband Jeff had the same feeling, and he used that motivation to get back in the air. Jeff held a pilot's license, but it had been years since he'd flown. Lesley's life continued on the fast track working far too many hours.
The changing moment in her life was when Jeff said he wanted to buy a plane. And that they did. When he took Lesley for her first flight in their Cessna 172, her life took off in a new direction. 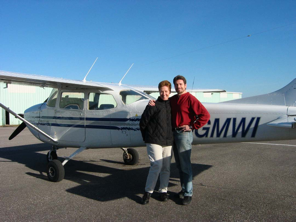 Lesley and Jeff: The day that changed her life
Jeff explained procedures and Lesley took controls for a few minutes and flew straight and level-- she was hooked. That one flight was all it took for Lesley to realize that flying would become part of her life. She said, "The thrill of flying is indescribable. It's exciting, definitely, but also there is a feeling of freedom and control." Over the next few weeks she and Jeff discussed the many adventures they could take with their plane, and Lesley realized that a very different life was about to emerge.
Two weeks after her life changing flight, Lesley quit her job. The day before her 50th birthday she told her boss that the stress, the hours, and the commute were too much. "Besides, we just bought an airplane and I'm going to learn to fly it." Two days after her 50th birthday, in her own plane, she took her first flight lesson. 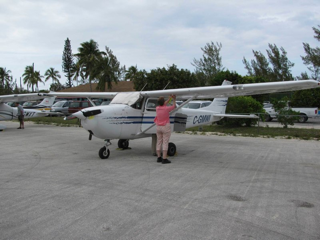 Lesley's story of her solo flights and the nerves she felt brought back memories. Her realization during her solo cross country flight that she was, "expected to get into this airplane and fly it to yet another 'no-home' airport, then back to my home airport. Again, the 'confidence thing!" Made me smile. She was nervous and say's she lacked confidence. I say, she didn't quit. She continued to fly and exceeded her own limitations. She was awarded the 2007 Award of Excellence from the Ninety-Nines for her outstanding flight and written test scores.
Jeff was her first passenger as they took that "$100 hamburger" flight. But Lesley had a problem taking passengers without Jeff. 3 years later, she'd read about the CENTENNIAL OF WOMEN PILOTS
Once again, she concurred her fears. She signed up to introduce women to the sky and posted a message on Facebook, inviting her friends. One friend, Michele, who'd flown years before but had quit after a car accident, was overwhelmingly enthusiastic. Between the two of them they recruited 13 women. On March 8th, one of her passengers was Michele's 11 year old cousin, Jade. Jade's first flight in the right seat of Lesley's 172 changed both their lives. I suspect we'll be seeing Jade in the sky on her own before we know it. 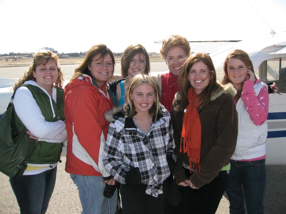 Igniting Jades passion was extremely rewarding for Lesley, and she looks forward to being Jade's mentor. Lesley also gained a "huge confidence boost" and she's not "as" nervous taking passengers.  Since that flight, she's taken several other women and girls for flights-- all by herself! 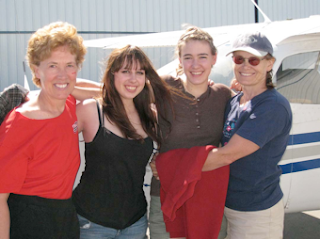 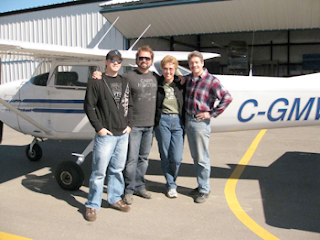 More Passengers: October 2010
Sons: Chase and Curtis (Curtis' first flight)
Lesley and Jeff
Lesley flew Young Eagles last weekend! And tomorrow she has another Centennial Event planned.
Help Lesley celebrate the Centennial of Women Licensed Pilots.
Introduce non-pilot women to aviation by taking them to Edenvale for lunch on Saturday November 13th (rain date, Nov. 14) This event is open to all pilots. Reach out to your female relatives and friends, local women's groups, girl guides, etc. and fill up your plane with non-pilot women.
Please call Lesley at 416-287-2975 or email her at Lesley@amrsys.com for more information or to register.
Lesley now has almost 350 hours in the pilot seat and another 150 in the right seat with Jeff in command. Jeff and Lesley share the legs. They fly to Oshkosh for Airventure and to Florida for Sun'n'Fun, annually. Twice they've flown to the Bahamas. And for the previous two years they've participated in the Interprovincial Air Tour from (Ontario and Quebe) and the Michigan Air Tour.

Jeff calls himself "the luckiest guy at the airport" and he is. He's married to a woman who isn't afraid of to conquer her fears. They share a passion of aviation.  A passion for life. Lesley also returned to the same company for part-time work, with half the income, but a very full life. 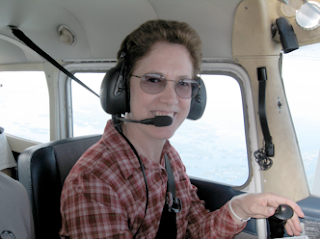 "Life is too Short to be a Passenger!"
Who can you take into the sky?  Take time and  Fly It Forward!

Happy Flying ~ Karlene
Posted by Karlene Petitt at 6:58 AM