Timothy Elwood’s desire to fly began during his early teens when he realized an exciting career in aviation would be his destiny. Living just 8 nm south of Belfast International Airport Timothy had the perfect opportunity to gaze into the skies and watch aircraft depart. On rare occasions, when the winds shifted to a northerly flow, the magnificent aircraft that mesmerized him would fly over his house at very low altitudes during their approach. Needless to say… another young man had gazed to the heavens and wondered, “What would it be like to fly?” 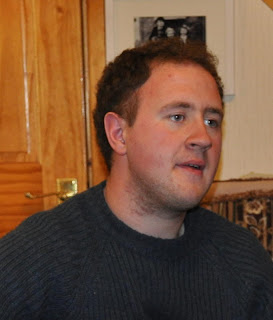 When Timothy was 12 or 13 his family decided to travel on a foreign holiday and this was his first opportunity to find his way onto an aircraft. He remembers this first flight as a mixture of nerves and excitement. Somewhere between this trip, and the ensuing opportunities to travel, Timothy knew that a career as pilot was what he wanted.

His parents must have known as well, because for his 18th birthday they bought him an introductory flight lesson and he was hooked, confirming his professional goals were on the right flight path.

Since Timothy’s first flight he has joined a local flying club and takes to the skies whenever he can. He has completed all but one of his written exams and has 11 hrs of flight time. Unfortunately losing his job a year ago due to the recession, he is finding it more difficult to build those hours. Hours in a pilot’s language means everything.

Reviewing Timothy’s resume, I can see he has experience with communications and marketing, as well as organizational skills. He’s worked with installing computer systems for businesses, had the opportunity to be an assistant teacher during his college days, and worked in retail at garden a building supplies store.

At twenty years old, Timothy lives in Lisburn, Northern Ireland, is currently unemployed, spends his time helping his grandparents, and is looking for any opportunity to move his life forward.

“I would like to become a commercial pilot as I enjoy the thrill of flying and being able to see the world from a different perspective.”

“My biggest problem is finance as I am unemployed I am struggling to afford lessons.”

Please join me in supporting Timothy and his dream. Comments, suggestions, and creative ideas how he can reach his dream will be much appreciated. You can also email Timothy directly at Telwood909@hotmail.co.uk.


We all wish you luck Timothy!
Posted by Karlene Petitt at 4:10 PM