Funny thing happened on my way out the door to sit reserve in Detroit. Scheduling called and told me that I was already assigned a trip...but out of Minneapolis. They also told me that I could "deviate" and go directly into Minneapolis...on my own.  I wouldn't have to go through Detroit.
Sounds great to me!

After an hour of figuring out a plan, with a backup plan to get to Minneapolis, and canceling my previous listing to Detroit, and the Detroit hotel, I began calling hotels in MSP. Holiday Inn by the airport, $110! The woman at the front desk said to call my company and if they would send a fax, I could pay the discounted rate.

I called scheduling to tell them that I was officially deviating, but I was outside the 24 hour window, and promised to call when I landed in MSP. Scheduling sent me to crew accommodations and great news! Delta will let us use hotel rooms that have been previously blocked for crew but were not going to be used. I was in luck... a Flight Attendant was rescheduled and I could have her room, for free! 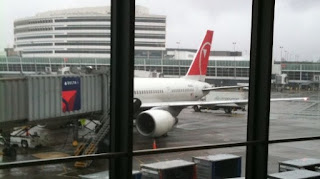 Last of the Red Tails SEA
Once at the airport, I learned that my flight was full. I had not booked this jump seat, as I gambled that I could get first class. Stars were aligned and 4B was my destiny.  A first class meal, a great conversation with a doctor from the Mayo clinic whose father was retired military and wrote a couple books... Fighting to Leave and Cleared Hot by R.E. Stoffey, and I rewrote 2 chapters of my novel.
Excellent flight, despite the weather delays.

Arriving at the Holiday Inn the adventure began. With late arrivals and misconnected passengers, the hotel was filling up, and they could not find the fax with my name on it. I called crew accommodations, who had no idea that I was promised a room and put me on hold to talk to scheduling, who also had no record that I was in MSP. Deep in the explanation phase, a woman behind the counter yelled, "Karlene hang up that phone! What do you think you're doing?"

Karen! My friend who had been working at the Holiday Inn since the 80's when I taught for Guyana, who had taken care of me during my new hire days with NWA was still here!  She had the fax with my name on it, and I told crew accommodations... "never mind." We caught up on life and Karen put me on the concierge's floor in a great room.

A late night of revisions and I awoke remembering to call scheduling and tell them I was deviating. Ted said that I was already taken care of, so I rolled over and went back to sleep. When I finally got up, and turned my phone on, there was a call from the Chief Pilot's office asking me to "please call."

There is a saying that if you can retire without having the Chief Pilot know your name, you've had a great career. Well, I'm having a different kind of career and pretty much my name is on the wall of every Chief Pilot's office. I might have to drop in and put a face with my name.  Apparently, while I was in MSP getting a room, I had not officially told them I was deviating, since I was supposed to call when I landed.

Officially miscommunication, and all is well. In 4 hours I will be on my way to Amsterdam.

Have a great day!