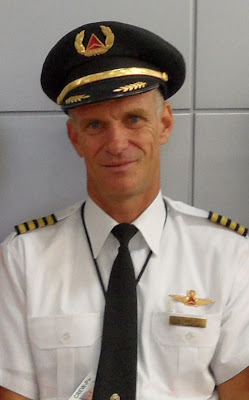 The challenge I have today is fitting the life of a pilot into one blog post. Actually, the challenge of today was logging onto any blog in China. Did you know we are prohibited? Interesting. Now I’m back in Tokyo, sitting at the gate for my flight to Seattle. 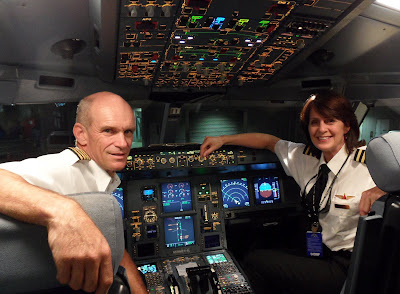 I have been flying with Mike Tanksley for the previous 11 days, and today we flew non-stop from Shanghai to Narita. I first met Mike when I came to Northwest Airlines in 1997. I was in Tokyo swimming laps and later we sat on the edge of the pool and chatted about reading and fishing, or something that made him recommended a book—The River Why. Per his recommendation, I did read and loved the story. Books tell us so much about a person, and I felt like I knew Mike even back then.

Why do people fly? Mike’s inspiration came from his dad who flew the T-6, T-33, and F-84, and took a tour in the Korean War with the Air Force. His military career eventually ended, but his airline career took off with American Airlines in 1955. During his father’s Air Force days he lived in Europe and hung out with good friends such as Gordy Cooper. With a pilot for a dad and Astronaut friends, who wouldn’t be inspired to fly?

In high school Mike had flown gliders and always knew flying would be an obvious career choice. But sometimes we take different paths to our ultimate goal— Life is truly all about the journey. Mike attended college and took forestry as a major. He’d thought being a forest ranger would be a great alternate career. However, in college he still toyed with the idea of passing the written test for ROTC, and he took a private pilot ground school, too. But his focus was on his degree of choice. He also worked while attending college and played an electric base, and was an avid skier. Music and outdoor sports continue to be a huge part of his life.

Mike had had the opportunity to go into the Navy, but there were no guarantees of a flight spot, and the timing was such that he didn’t feel it was the right thing at the time. His life was full with school, skiing, playing in bands, and friends. But after graduation he decided that he was going to become a pilot, so he tells his dad of his plans—Join the Air Force, become a mechanic, and wait for a flight slot! His dad says, “You’re what?!? You’re going to enlist and ‘hope’ you get a flight spot?!?” Mike said, “of course!” Well… Dad made Mike a deal he couldn’t refuse and offered him a loan to earn his flight ratings. 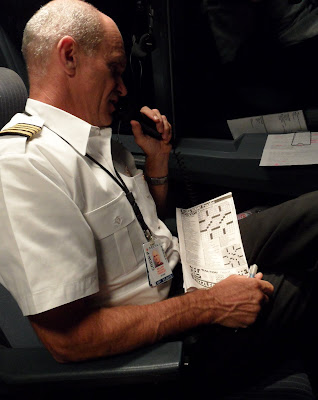 The next few years were filled with the challenges that many new pilots face-- finding the right instructor, the right plane, and the flexibility to fly. He flew at Phelps Field in a T-craft and Piper, soloed and left that school. He flew off to Sandpoint in Northern Idaho, but with his "hippie" because of his long hair, after flying a C-152 and C-172 he moved on again. He then found someone with a Grumman and he flew that and earned his license. 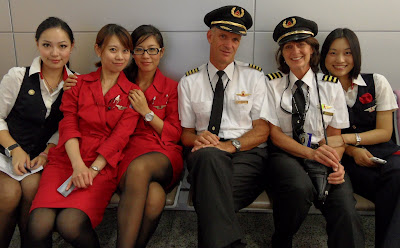 I’m hoping he writes the book of his life one day, because his adventures were many along the way. Each moment in time was a story in itself. Each plane, job and flight had an adventure attached to it. His next job he flew canceled checks, and was encouraged to break FAA regulations by flying in IFR conditions when he wasn’t rated. Oh, did I forget to mention the delayed paycheck that finally arrived bounced? Needless to say, it was time to move on again. His next flying job was flying parts for a charter company and he earned a couple hundred hours. But as paths in our lives shift, one of his biggest was when he won the lottery.

Mike won a lottery and received a permit for a private trip down the Grand Canyon. He’d never been rafting before, and this permit enabled him to take fifteen people down the river. 16 people, 6 rafts, 40 gallons of wine, 1 case 151 rum, 45 cases beer with another 15 cases stored down the river waiting behind the rock, and a case of additional alcohol including tequila to celebrate the survival of Lava falls… oh food there was food and supplies, too. Mike says the journey itself, “changed how I looked at the world. On the river for three weeks, raw elements, group dynamics…” 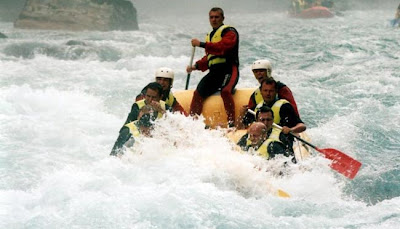 During that trip he realized one significant thing about his life—White water was the central theme. Be it snow, rapids, clouds, or the head on a good beer, this was his life. After that trip a friend gave him a connection to someone in Alaska who “might” need a pilot. That’s when Mike began his summer job flying as a bush pilot. He flew from July through October then returned to Utah to spend time with friends. He had a job he loved, money in his pocket and planned to take the winter off skiing then return to Alaska the following spring. That plan was short lived when Air Illinois called him to fly.

He spent two years at Air Illinois. He flew as a first officer on the Hawker and later as a captain on an Otter when the company was taken over by new management, and the beginning to the end was in process. During this time, however, he’d been called to Northwest Orient to interview. Two days before his interview with Northwest he had been on approach into in Paducah Kentucky, and his friend, and roommate, had been flying captain in the Hawker. He friends was on approach just ahead of him. Then they lost contact. It wasn’t until that night that he’d learned his friend had crashed, and they found parts of the plane spread across the cornfields.

It was time to move on. His interview went well with Northwest, but that job, if it would become a reality could be many months off. Another opportunity came up in the mean time. Transwestern, a little airline headquartered in Utah was looking for a few pilots. They invited thirteen people to join ground school for one week—unpaid—and at the end of the week they would hire three. Mike took the gamble and joined the class and was hired. Those new pilots took a variety of jobs while waiting for their training to start, and Mike found himself in dispatch for a month.

Mike was having a great time back in Utah and was skiing on his days off, while learning the inner workings of an airline. One day he happened to be standing in the back of the ski shack while the instructors were having a meeting and a woman came in and announced, “Is Mike Tanksely here, your mother is on the phone.” Moments of embarrassment were overpowered with concern, and then a bit of surprise when she told him Northwest Orient wanted him to come to work in ten days.

With NWA he flew as a second officer on the 727 for a year and a half in Minnesota. During that time he met his soon to be wife on one of the many lakes while he was windsurfing. She was the woman on her sailboat and had offered him a beer and a smile. He wanted to live in Seattle and soon had that opportunity to fly as a first officer on the 727. 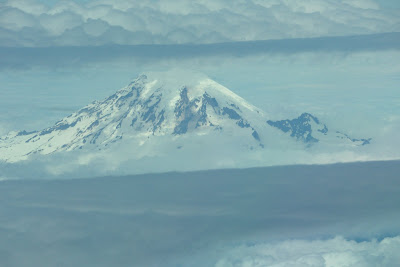 He and his wife, Carolyn, moved to Seattle together, where he flew for two years as a first officer until the base shrunk and they removed to the 727 flying. He transitioned to the back seat of the B-747, and soon found himself in LAX as a 747 first officer. In 1993/1994 he commuted to Minneapolis to fly as a captain on the 727 for two years. But the family began to grow in Seattle when his two sons were born remodeling was going on their home, and the commute was killing him. Thus he ripped off one of his four stripes and returned to Seattle as a 747 first officer. In the fall of 1999 he became a 747 captain where he flew for 18 years in Anchorage. 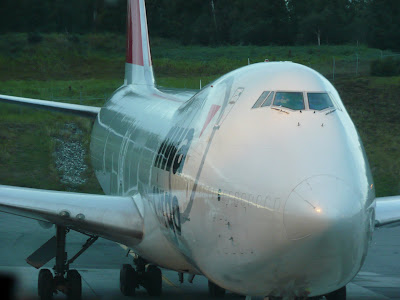 Delta bought NWA, sold the 747’s, closed Anchorage and Mike returned to Seattle on the A330. Mike actually began his training on the A330 one week behind me. As a matter of fact, my first meal out of my room in Minneapolis, while going through my training, was on my birthday, and while everyone was splitting up the bill, it was Mike who bought me my birthday dinner. 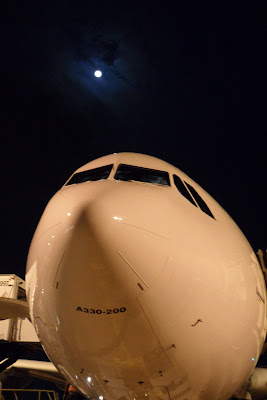 Today was our last leg, and I’m staying at the airport to head home a day early. It’s been a great 13-day trip. Thank you Mike! You’ve had a long and full life, and now that the kids are off and graduated, you and Carolyn can continue on the next adventure. It’s been fun getting to know you, and I hope we can fly together soon.