Last week I had the opportunity to write about the incredible woman Mireille Goyer. She is behind the Centennial of Women Pilots Project, a grass root campaign that is working toward introducing a record number of girls and women to the joy of flying. Men-- you're involved too! 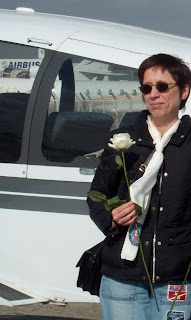 Stories of inspiration thanks to this Centennial campaign:

Lesley, from Ontario, Canada had an aversion to taking passengers. She organized a lunch date on November 13, as part of the celebration, and invited pilots to fill their airplanes with girls and women and fly for lunch to Edenvale Airport, Ontario. The moment she announced it, she had four pilots sign up. Lesley had never taken a non-pilot passenger before she participated in the campaign. She now is standing at 27 introductory flights. 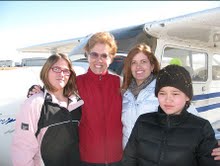 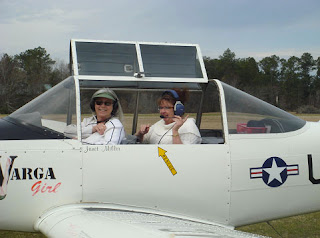 And then there was Patricia, the first woman to receive a Ghanaian pilot license last year. With the help of 3 male pilots, Patricia celebrated the event by flying 100 girls and women in one day on the 100th anniversary, March 8. They ended up flying 97. But to all, they reached their goal. I am so sad I was in Ghana twice and didn't meet with Patricia. Next time I'm there Patricia, lunch is on me! 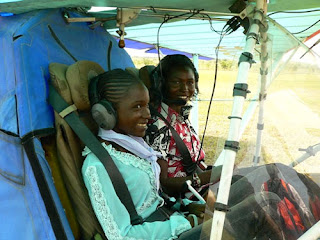 We have only TWO months before the end of the Centennial Year Mireille is looking for pilots to help salute the female trailblazers of the past.

If you are a woman pilot, then you have benefited from the breakthroughs of the women before us. Please encourage another woman to visit the sky.

You do not have to be a woman to take part. Men-- this is a great excuse to get a woman in the sky. A great reason to fly. A great opportunity to build hours. You too can help.

Students looking to build hours? How about working with your FBO, find a sponsor, and spend every weekend from now until the end of the year flying "women" to introduce them to the sky.
You can promote your event a number of ways:

1. Career potential with an introductory flight.
2. Remove the fear of flying.
3. Support women to empower themselves.

Each flight, along with photos is listed on the Centennial website:
Centennial Participants

And Trophies too in three categories too!

1. Most "female pilot friendly" airport in the world in 2010. (The most non-pilot girls and women introduced in 2010)

2. Most dedicated women pilot in the world in 2010. (woman pilot who introduced the most non-pilot girls and women introduced to aviation in 2010)

3. Most unusual introduction to flight of a non-pilot girl of woman by a pilot in 2010.


To participate all you have to do is register at:  http://www.centennialofwomenpilots.com

If you haven't yet, read the story about the woman behind this event:  Mireille Goyer: Friday Fabulous Flyer

Don't forget to keep me posted on your plans. I'll advertise your event for you!