So far I've only flown with pilots who fly the A330 with all the automation engaged until final, then the autopilot comes off.  Last month, I flew with a couple captains who also turn the autothrust off on short final because of a sinker issue. My last flight, I flew with a captain who encouraged me to fly with everything off. He says, "those guys who don't fly her, when they have to, are going to have a problem." 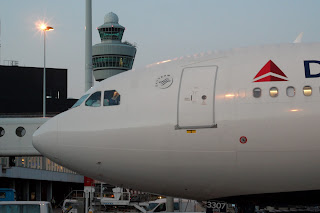 DTW/AMS: My landing. A long night, weather in Amsterdam, and a sunshade the refused to go up... and I got my first slam dunk. Managing the slam dunk was enough fun for me, so automation stay engaged until I disconnected the autopilot on final.

AMS/BOS: The other first officer's landing, and he disengaged everything at top of descent. He loves to fly, and it shows. I sat in the jumpseat, and got the first hand view of how busy he was, but also that the A330 really is just an airplane.

BOS/AMS: The captain's landing and more weather. Autopilot off, autothrust on... I think the winds were 19 gusting to 30. 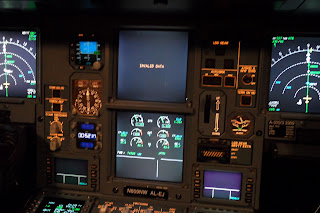 Invalid Data... 30 minutes out of Boston
AMS/DTW: My landing. Now or never. Out of 10,000 feet I said, "are you guys ready?" and I disengaged everything. Yes, we were in the weather. But I was thinking ... my captain has 20 years flying glass, 11 years on the Bus, and when would I have another chance to fly with someone who encourages this type of behavior?

The wrath of mother nature tossed us about, the trend vector couldn't make up it's mind which direction to go, and ATC was playing with me. I have never worked so hard in all my life. Once on final, a moment of stability, I said, "Guys, I smell something burning."  My captain said, "I think it's a helmet fire." The other first officer said, "I think it might be Detroit."

At 50 feet the captain said, "From now on, everything is normal." And I landed her like I always did. Then he said, "You know, I was surprised that you kicked off the autothrust with the weather so bad." They were both laughing at Murphy's Law with ATC's overactive intervention, and I laughed the hardest. Of all days...

As we rolled off the runway, that burning odor that I'd smelled presented itself. A pack failure.

Taxing clear of the runway I was supposed to talk to ground...but had difficulty without stumbling over the words. Amazing how an approach that pushes you to your limits, can impact the speech center of your brain. Thanks for a great trip Reg!

Off until October 8th ... 4 days on reserve... then more days off until the 17th.  I intentionally bid this schedule to help my daughter. I'm now wearing my grandma hat, sitting in Santa Clara, babysitting my grandson.

We're planning cleaning up my computer and writing an A330 study guide. The amount accomplished will be directly proportional to his willingness to nap.