What do I like better? I have been avoiding the answer to this question for months.

My current Airbus/Boeing debate is really a 747 verses A330 question. Think about it... Does that little bus have anything to compare to the whale? I think not. But then that could just be a size issue. And guys ... I hate to tell you, but size really is an issue. Especially when there is an airplane involved. But I love the technology of the Airbus. 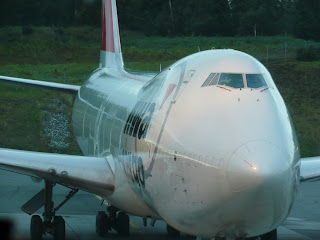 Being a Seattle girl, and flying Boeing aircraft my entire career, I stepped into the Airbus with trepidation, but a willingness to keep an open mind. I wasn't sure at first.... but I think the Princess and I are now having a relationship.

Are there things that I think Boeing did better? Perhaps. A bit more difficult for those fat finger, fast typing, pilots who inadvertently screw up a reroute on the Boeing because they mandate an extra step in button pushing before executing a change. Airbus... type it in and it goes. So goes the flight plan you just built if you make a mistake. Don't mess it up.

The situational awareness of the Boeing map might be easier in some cases when intercepting a route, the original green line stays until you're on course. Airbus creates an intercept point and wipes out everything that was behind. Does it matter? Just a different picture. Not a like or dislike, just something that I had to get used to. 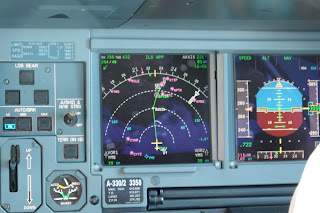 But does it matter what you have on your map, or ADI on the Boeing anyway? The control yoke on the Boeing hides the bottom half of your instruments! Not a good thing. And yes... the strangest thing for me is to not have the controls between my legs, but a stick at the side. However, it is a great feature to be able to have a full picture of your display units.

Eliminating the discomfort of the missing control yoke, I've been flying with my table out. A security blanket, perhaps. But soon I'll be weaning myself off of that too. But you have to admit, the table is a nice feature. Something I never took for granted in the back seat of the 747-200. 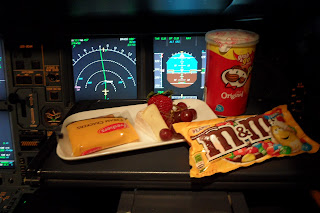 Landing is a huge difference. Don't tell anyone, but the 747-400 lands like a big Cessna 172. The A330, you don't really flare her, but just stop the rate of descent. There are also 3 landings on the Airbus. Back of the mains, front of the mains, and then the nose. Maybe Airbus thought they could convince the FAA to allow each landing to count for three. 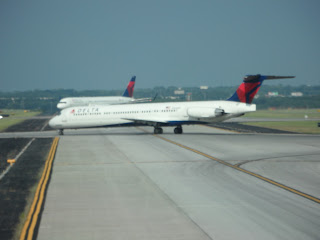 How does she fly? Just like a plane. Control inputs creates performance outputs. My last flight I took the opportunity to fly her with everything disconnected, and yes, she is an airplane. The stick is relatively easy to use as well. 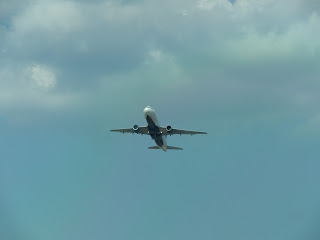 Nap time... Speaking of which my grandson is having a difficult time right now. Too many slamming of doors in this apartment. Unfortunately the galley wasn't strategically placed for optimal rest on the A330. Not sure what they could do there. However, it's nice to have the crew area by the flight deck. But the flight attendant jumpseat is on the back wall. When they pop out of it to get to work, the seat hits the wall. Similar impact as sledge hammer.

PA is different. There are two buttons for the Flight Attendants to talk on the PA. PA, and PA All. One goes to only the passengers, the other goes to the entire aircraft, crew bunks included. Take a guess... 'PA All' is the button that goes to "only" the passengers, and 'PA' hits the bunks. Common sense says it should be the other way around, but I'm sure there was logic there.

Do I like the Airbus better? At this point I have to say yes. But then I haven't flown the 777 or the 787 yet. So the verdict is still out. I do have to say that both Boeing and Airbus build quality aircraft, they're just different. 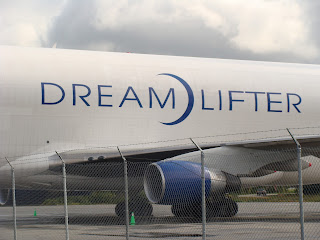