A330: Don't interfere with a Smart Woman!

Many mysteries of the female gender will go unsolved until the end of time, and the Princess’ secrets are no different. Don’t ask ‘why’ she does what she does … the best any pilot can do is to know what to expect, know when she’s lying, and what to do about it.

In a perfect world, the A330 strives to fly her profile in managed Nav. This profile plans a flight-idle descent with managed speed. She displays information on the map as to when she’ll manage her speed, per constraint, with a solid magenta dot. She displays a lightening bolt where she’ll intercept the path, a blue arrow for level off, and a white arrow for descent. She displays her constraints in magenta if she’s going to make it, amber if she’s not. If she’s going to make her constraints, speed and or level off, both will be displayed in magenta on the MCDU. 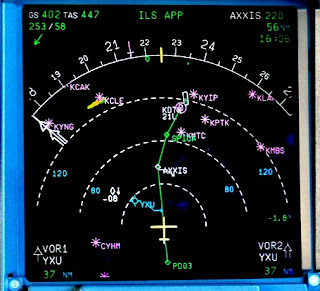 She wants to bring the thrust to idle and perform an idle descent. She’ll decelerate at the magenta D to approach speed, and all the pilot has to do it bring out the flaps and the gear. That's in a perfect world.
The Princess wants to make her profile… and she will, until someone interferes with her plan. When ATC slows you up during your descent, the minute you change your speed from the ‘profile descent speed’ (found on performance page) to a slower speed, you’ve just taken yourself off profile. Once you’ve taken yourself off profile, you no longer will make your restrictions. The worse part of this scenario is the A330 display stays the same… indicating you are going to make the constraint per the magenta indications. Fascinating.

What can you expect… you’ve interfered with her plan.

This is the problem: The Princess will indicate you’re going to make your level off with her magenta colored constraints when you're not. If you know this, you’ll be fine. The easiest way to determine how far you’re off the profile is on the Progress page. Know that if you’ve been slowed, you will be high. The only way to get her back on profile is with speed brakes.

Watch the deviation on the progress page, use the speed brakes, and you’ll can her get back on the profile. All is good. But always keep apprised of the distance remaining and your altitude for profile planning.