The Ability to See the Future...

Are authors prescient, or does research identify facts that when analyzed creates the story that eventually prevails? In 1981 Dean Koontz published a book, The Eyes of Darkness. This was a thriller about a mother's quest to learn whether or not her son had died a year earlier. Authors often write stories that come true. But how many come as close to truth as the specifics in this novel?

Below is a page from The Eyes of Darkness, that came to reality as precisely as the date.  "In around 2020, a severe pneumonia like illness will spread throughout the globe, attacking the lungs and the bronchial tubes and resisting all known treatments..." He even mentioned that this virus was made in military lab in Wuhan and called his virus: Wuhan 400. 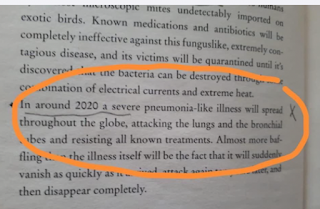 Don't underestimate the power of fiction writing, and the truth within the novels. The Flight For series is one that the industry can look back upon and say.... how did she know?

My first novel Flight For Control  embraced the theme of mental health embedded within the aviation world where pilots intentionally crash their planes. Two months after this novel was released a Jet Blue captain was locked out of the flight deck by his first officer, after he suffered from a mental breakdown. Then four years later a Germanwings first officer successfully locks the captain out of the fight deck and flies his plane into the mountains.

The second novel Flight For Safety  Asiana crashes in San Francisco. However, I had a scene that mirrored that event. And then my pilots are flying an A330 to Singapore as a storm builds, they get caught ... and two years later Air Asia takes the same route and flies into that storm and crashes.

The third novel is no different. Flight For Survival  embraces NextGen with multiple threats looming. Aircraft complexity, fatigue, and training issues leave pilots open to error. Unmanned aircraft systems—drones—are flooding the airspace, creating a regulatory nightmare. Safety Management Systems are mandated to be in place by 2018, but creating a safety culture is an essential ground floor requirement. The truth in fiction.

The fourth novel, Flight For Sanity, Airlines are cutting training at the expense of safety. What is the FAA doing with industry issues of automation dependency, lack of hand flying skills, confusion, and lack of understanding that stem back to 1996? Nothing, yet these issues are more prevalent than ever. Not unlike what's happening in the world today.

The fifth novel, Flight For Truth, identifies the startling truth of how far airline management will go to silence a pilot for bringing safety concerns forward. The use of mental health as a weapon of control is not unique, but the reason in this case takes the connection all the way to the White House.

The FAA has known since 1996 that pilot training was an issue and would impact the future of aviation safety, yet nothing has been done. The industry has experienced hundreds of accidents and incidents because of this lack of response. The literature review in my recent book, Normalization of Deviance a Threat to Aviation Safety, presents that research and the knowledge. The data and results of my research proves that these events were not the pilots fault. The 2018 and 2019 crashes could have been avoided, had the FAA heeded their own warnings and mandated their SMS regulation and safety culture.

What if the pilot shortage was induced to prepare for NextGen? Without the available pilots the FAA would have no option but to approve the reduction of pilots to ensure aviation economics. A crew of four would shift to three, three to two, and two to one. With ground based control, and a pilot to extend the gear, the industry would be much safer.... Right? The marketing of that plan would be the statistics of pilot error. However, what I learned in my research is that pilot error is not the cause of accidents, but the result of inadequate training and negative safety culture. Time will tell what happens with the industry, but until then, I will continue to write fiction and in 27 years, we'll see how much more of this becomes true.

All the Novels are Available on Kindle
And on my blog, as is Normalization of Deviance.

“It's no wonder that truth is stranger than fiction.
Fiction has to make sense”