Flight For Sanity is Available! 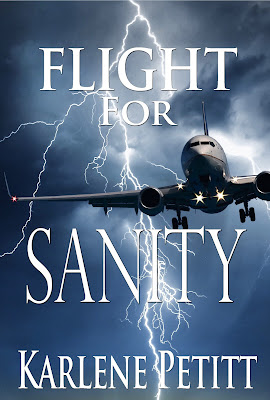 What the Experts are Saying...

"When Karlene Petitt grabs you by the throat with her fast-paced narrative, she doesn't let you go until the early hours of the morning! Flight for Sanity plunges you into a world in which money trumps everything...aviation safety, homeland security, and even the presidency. Couldn't happen? Some of it already has, as with the use of fraudulent mental concerns to silence airline pilots who dare to point out safety problems.

"Petitt is back with her best novel yet! Rich characters, gripping flight scenes, and tidbits of wisdom for upcoming pilots… Cutting to the heart of critical safety issues airline pilots face, and retaliation that follows. Think that’s an unrealistic plot? As an airline pilot, I can assure you—this story is straight out of today’s headlines."

Petitt captivates the reader with yet another engaging tale of airline drama with enough realism to make it truly terrifying. A great read! I couldn't put it down!

Fact and fiction merge into an airline drama where everything is at stake. You'll be thinking about this book long after you've read the last page.
Captain Kathy McCullough
author of Ups and Downs.

Kathryn Jacobs is a top-ranking FAA official in charge of drone regulation. But her proposed research has exposed a nerve deep within the walls of the FAA. At the same time, her best friend, airline pilot Darby Bradshaw, is fighting to promote a safety culture at Global Air Lines. Darby was warned by many not to report, but her determination to do the right thing has manifested into a nightmare she may never escape.

Aviation safety is at stake—especially if the pilot job is eliminated.

Flight For Sanity is a thriller that reads like a mystery. But there is no mystery about the corruption behind the scenes of the world’s largest airline and within the walls of the FAA. The lengths to which powerful people  will go to destroy these women will shock the nation. It’s time the world learns the truth, before it’s too late, and automation replaces pilots.

Truth is scarier than fiction.

Paperback and Hardback
available on Amazon

Autographed copies are
Sold on this blog!

Author of:
Posted by Karlene Petitt at 12:00 AM