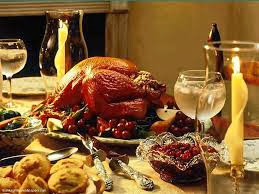 With warmest wishes to you and your family...
May your life be filled with gratitude.
T.H.ursdays with Tom Hill
Thankful:

A beach appears in the distance. Our flight is low to the water as we approach from the east. The formation of F-15's is spread out so it maximizes our look ahead while allowing us to keep track of each other with a glance. We scream over local fishing boats. I'm not sure but I think they're from the little villages just off the beaches up ahead. In the pre-flight brief, someone thought the land ahead was the same Philippine beach used in the movie Apocalypse Now.
I'm concentrating on the dozens and dozens of tasks inherent to a low altitude training flight when a thought creeps into my head: I am terribly impressed by all this, how cool it is. I think how fortunate I am to be there doing this exact thing. As far as I am concerned, I am the luckiest person in the world. There is much to be thankful for.

This event was more than 20 years ago. We had just finished a big exercise in the Philippines with other Air Force units and an Australian contingent. The flight up the beach was a final training flight before heading home. The interchange for the month was fantastic.
The events memorable, especially with our international allies. Flying over that beach was icing on the cake. We left a couple days later, returning to our base in Okinawa. Not two weeks after that, Mount Pinatubo erupted, devastating the area. As I watched the aftermath on television, I thought again how lucky I had been to be there, and how lucky I was to have left before things got serious - to have those opportunities and then not to be there two weeks later, an eye-blink in geological terms.


Our Flight Surgeon was sent to Cebu Island to support the US recovery effort following the volcano eruption. He returned weeks later with stories colored with the perspective of his pre-Flight Surgeon days as an ordained minister: the abject lack of resources, the sea of people, the misery, the constant and steady relocation process. We all listened, spell-bound, beers in hand, as he told of his experiences.

In the coming months we got more stories from comrades who where caught with their families in the middle of the craziness - the ash showers, the convoy drive from Angeles City to Subic Bay, the personal losses - all things I couldn't really fathom because they sounded so biblical and incredible.

I'm thinking of all this now because the region was hit by another gigantic natural event, a typhoon, a few weeks ago, and because it's Thanksgiving. As much as I might feel separated from events around the world as if they're on another planet, these events are a great reminder to me that it is only through small differences in circumstances that I don't have firsthand experience of such calamity.

I've been through plenty of natural "events," though none caused the damage I've seen on the news lately. Over the years, I've lost family and friends due to disease, crime, and chance. There is no explaining or justifying how things happen. I have my health. I'm blessed with great relationships. And, I feel fortunate I am able to embrace the fact that, by luck, I'm not one of those on the beach searching for relief. I am thankful.

I'm not suggesting I should regret my set of circumstances. Far from it. I only embrace the accident of my good fortune when I feel a little put out by some minor thing. It helps to always know that whatever my situation is, it could easily be worse. It is only through a crazy set of circumstances that it's not.

On this day, Thanksgiving Day, I remind myself how little would have to change to make my life a completely different story, and I take time to reflect and be thankful for my happy destiny.

Tom
Posted by Karlene Petitt at 12:00 AM