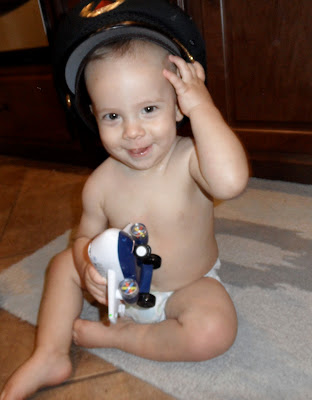 One year ago today I was planning to make a combination bring Carter into the world and my first Oshkosh trip. But as life happens, Carter came charging into the world five days early and had an extended stay in the NICU. He's still charging. And today he is one year old. I'm in Austin celebrating his birthday. 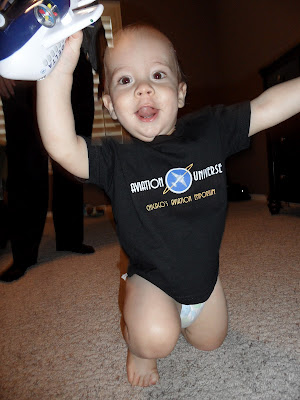 We had an interesting day yesterday on our journey down here. I ended up at the airport while my purse was still at home. An emergency 911 call to my friend Kathy. She left the PNWA conference to rush to my house, found and then brought my purse to the airport. The flight was oversold, but as good news would have it I got a seat! And then... 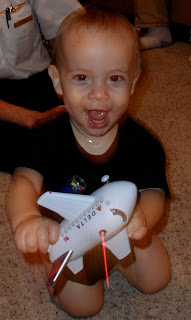 The Captain moved me to a First Class seat. Oh... so nice. I actually got some writing done on the plane. Unfortunately an hour or so into the flight, we heard the announcement, "Is there a doctor on board?" The flight continued on, so I'd assumed there wasn't an issue. But toward the end of the flight I moved to the flight deck so they could have a pregnant woman move into my seat, who quite possibly was losing her baby. It's hard to imagine the pain she was going through.

Major kudos to the efficiency and compassion of the entire crew at Alaska Airlines. They did a great job. It takes more coordination than you think for a medical emergency. They needed to get her to the most suitable location. In this case, it was home to her husband in Austin. 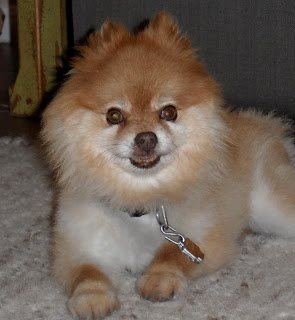 
Back to the joy of life, I got to see my future aviator Carter, and his little dog Biscuit. Yes, another little guy who loves planes. The baby, not the dog. After celebrating the big birthday weekend, I'll head home Sunday night, and then Monday morning I'm off to Oshkosh for the first time. Who say's good things don't come to those who wait? Now... it's time to party like a 1-year-old!