Another three months has passed without a landing or a takeoff. Do you ever wonder why they are called bounces?  I don't.

Today I'm headed to Minneapolis to visit the simulator to get my three takeoffs and landings. This may be my last time at NATCO, Northwest Airlines Training Center, because in a few months all simulators will be moved South.

Before I head East.... a gentle reminder of something important on the A330. This is one of those things we tend to forget after being out of the simulator for too long.... 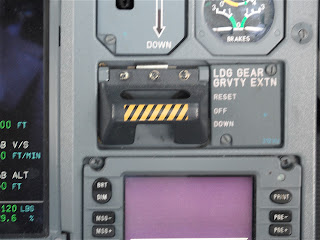 To extend the gear by manual extension, you not only must lift the yellow and black striped cover above, but you must move the red levers out of the way before you can lower the bar, to manually move the gear to down. 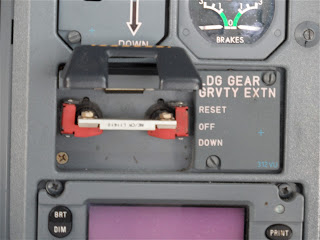 Simple yes. But in the heat of urgency something I've heard is often forgotten.

Remember the old 727 and that big crank that we put in the floor. We had to turn it one direction for a certain number of turns,, and then the other direction to lock it down. Does anyone know how many cranks it took to get the gear down manually on the 727?