These are among the hot topics in the aviation industry. As they should be. NASA has done numerous studies on fatigue and napping. The FAA finalized their Fatigue Ruling for commercial airlines. The National Mental Health institute discusses the serious impact of Chronic Fatigue Syndrome. We question if pilots are Flying Drunk with Fatigue: 17 hours awake equals an alcohol level of .05. There are not enough hours in a day to read all the research that points to one statement:

Pilots should not fly fatigued.

We have the research. We’ve watched the impact. One would think we have advanced to a level of understanding of how important rest and mental health is for pilots. But we have a long way to go.

As many of you know I have been Sitting Bedside in the Hospital while my husband has traveled through hell over the previous three weeks. He’s a fighter and I have been instrumental in his survival.
Everyone needs an advocate. And when we go through challenging times like this, we shouldn’t have to worry about our jobs. But as the weeks continued and there was no release date in sight, I called my Chief Pilot “Support” Center, to determine how much sick leave I had, and asked if I could use my vacation.

CPS (Chief Pilot Support) told me that I had 150 hours of sick leave, and should use that before vacation because we renew our sick bank in June. And then he said….

CPS: Wait. Who is in the hospital?

CPS: You can’t use your sick leave while your husband is in the hospital.

Me: But I am sick. I've been here every night. I haven’t slept in 3 weeks!

CPS: Sick Leave is for when you’re sick, not your husband.

CPS: This doesn’t pass the Sniff Test. You better call your Chief Pilot in Seattle.

Then he hung up and pulled me off payroll.

I would expect the support center to support. It's hard enough for pilots to ask for help... we are fixers ... so when we do ask for help, we need it. Second, did he expect me to go fly a plane after being awake for 3 weeks? 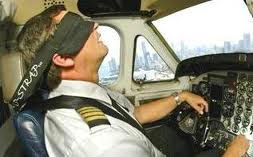 I don't think so. As it turned out the person in charge of my Chief Pilot Support Center is not a pilot. He also missed the memo that it's against company policy, FAA rules, and safety to fly fatigued. The point is... at this time of the equation, I was sick. Nobody can live under stress like this and not have their health compromised.

I could have called in sick and not told him what was happening, but that is also in violation of my company's, and my, core beliefs... "Tell the Truth." I never imagined the support wouldn't be there. All I wanted to do was give up my vacation and not use sick leave.

Thankfully I found support in Seattle.

I soon learned that Washington State had passed a law for this type of situation with the Washington State Family Care Act which enables a person to use their sick leave while caring for seriously ill family members.
Have you faced a situation like this?

It's sad that our government has to mandate laws for companies (or rather individuals running departments) who do not have compassion or exercise common sense to do the right, and legal, thing.
Thankfully I am protected, which enabled me to take the safest and most humane course of action.
NOTE: It's been brought to my attention that California has the same law. Please check with your state to determine if you have this law, and if not... get it on the books.

It's true that women have more of a nurturing mindset, and understand the power of being there. Men, on the other hand, financially fix things. They show their love by providing. Most male pilots (and we know that more than 96% are men) would go to work to make sure they could pay their bills. But is that where their heads would be? What about the woman who is faced with caring for her elderly parents or children? These responsibilities traditionally fall in the woman's lap.

We need to do something to make sure a pilot is not forced to fly when they have family members in crisis or they are going through a divorce. All airlines should have the Family Care Act in place. Is this something the FAA should mandate?

Your life is in your pilot’s hands. You want their heads in the plane. What comes of this is another chapter in Flight For Control’s sequel… Flight for Safety.

Are you in favor of a F.A.A. mandated family protection act, similar to the Washington State Family Care Act , that supports pilots who need to be someplace else than in an airplane during the event of a family crisis? I am.

Support the creation of the

Something to increase safety, when flight managers don't get it.

Enjoy the Journey!
XOX Karlene
Posted by Karlene Petitt at 12:05 AM