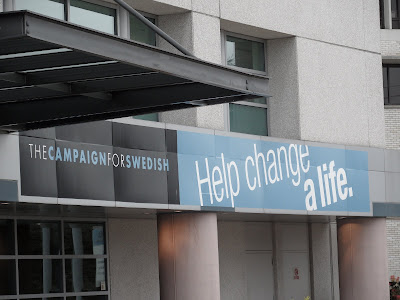 “Whatever Doesn’t Kill You Makes You Stronger”

This post is to thank everyone for their heartfelt wishes, prayers, and good thoughts that have flow around the Internet world via Facebook and Twitter. You’ve been my strength to get me through a very difficult 3 weeks. We have more to come, but whatever doesn’t kill us will make us stronger. To all my friends, you are the best. Thank you all.

The short of it, my husband’s abdominal pain was the result of a Hernia Patch gone back. Last July he ended up in the E.R. with a problem with the same patch. They rotated, dissected his bound intestines and re-secured that patch. 8 Months later the patch reared its ugly head again.

Manifesting in pain, an xray showed there was blockage in the lower intestine. The radiologist wanted to send him home as he said, “This will pass.” I told the surgeon, “He’s been in discomfort for a month, and intense pain the previous three days, this is not going to pass and we should do the CT scan.” He did.

We soon learned that his intestines had gone through a hole in the patch, and surgery was imminent. 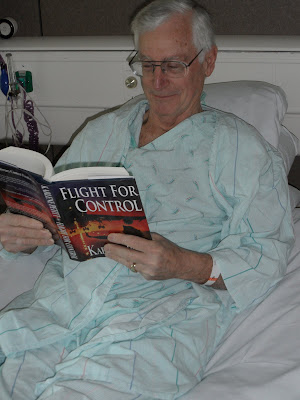 Note: Always follow your intuition, despite what the professionals may say. It could save your life, or your loved ones.

Surgery was a success. They removed the patch which was rotten, infected, and in pieces. They stapled him together. Apparently he didn’t need the patch after all. Why it had been put in initially is left to be determined. ICU for 3 days, a day in the Telemetry floor, a day on surgery floor and he was released.

The wound began oozing two days later- infected. We returned to the Dr. where he removed the staples, cultured, and I got to experience the next level of home care by stuffing gauze inside the holes and bandaging twice daily to absorb the infection. When the culture came back, we changed antibiotics to those that would kill the infection. This took us into Easter weekend. All his kids were home and April 7 was his 71st birthday, and then Easter the following day. 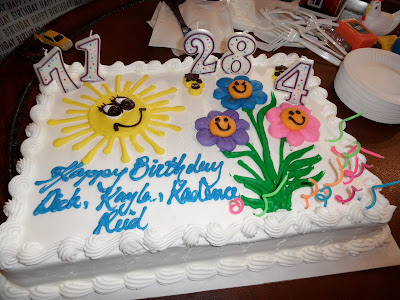 Sunday evening he experienced a supraventricular tachycardia... arrhythmia... 140 beats per minute for about an hour.

Monday we were back to the doctor's office and his heart raced to 150 beats per minute in the office, then 15 minutes later is slowed. I took him to Swedish hospital, at which time we thought he was having a heart attack as we entered the hospital. We got him to a chair and wheeled to his room, (after we found him going to the wrong floor because there were two Petitts checking in at the same time) and the fun began. Heart beat was now normal but the series of days included:

A wound pump for his abdomen. A white cell count of 28… extremely high. A Staph infection in his blood. An infection in his abdomen. Heart meds, that did not stop the heart from racing…he had another event. But then his heart dropped to 40 beats per minute. It’s been hovering in the low 50’s and the nurses are now not giving him the drugs to depress it further… common sense prevails. Another CT scan and they found an abscess the size of a softball deep in his pelvis, blocked intestines and potentially compromised bladder.Then they had to cut his abdominal wound to put in a larger pump.

Through laparoscopy they drained his softball through a hole in his rear. 50 ml came out, and it’s still draining. The “bug” doctor is analyzing the cultures and hopefully we’ll have the answers today. Yesterday we had bad news. White cell count had gone down with the drugs, but now is going the wrong direction. His bowels are swollen. An Xray last night, that turned into two visits because they took Xrays of his chest, not abdomen. 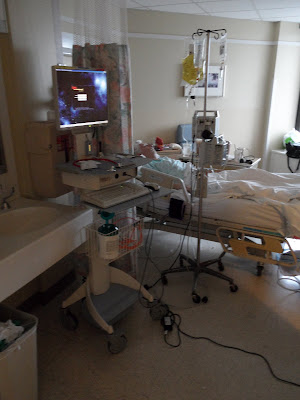 They are talking of another CT scan. That's equivalent to radiation of 300 xrays in a 3 week period.

Tubes draining. Tubes feeding. Tubes fighting infection. Machines beeping. We were going in the right direction ... until yesterday. Hopefully that direction will turn again and we will be home soon. First we need to know what drugs to fight the many infections that resulted from this unnecessary recalled hernia patch.

He’ll live with the wound pump and the drains for a while, and the building process will be slow. I write this with a yawn and a body that could drop at any minute. Adrenaline (and Verve, my newest energy drink) is keeping me going. The nights are long in the hospital and I try to laugh, it beats the tears of exhaustion and worry.

Join me this week for the life in the hospital …

· Ambien Administered to all the patients! What are they thinking? 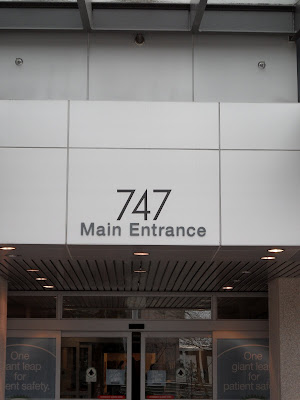 Note the address on Swedish Hospital and the room number. 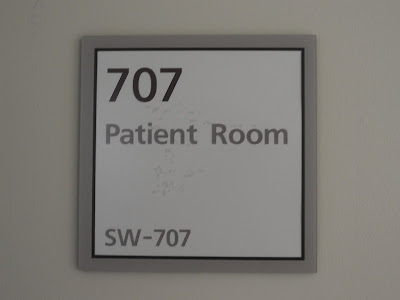 We're keeping the aviation theme to Flight For Success. His abdominal surgeon's wife is a Flight Attendant for Alaska (old Pan Am) and his son is an A330 pilot for Hawaiian. Small world.

Thank you all for being here for me during this trying time. These wings are flexing, but they will not break. Together we can do anything—even survive. This week is more like Fight For Survival.

From the bottom of my heart, thank you all for the love and concern. You are the best!

We are here for another week... at least.

Inflammation in the bowels creating obstruction.

Standing by for another CT scan.

Enjoy the Journey... wherever it takes you.