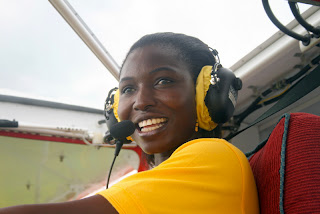 “Young people should understand that hard work is the only secret to success and you must stay focused in everything you do if you want to succeed in life.”
Patricia Mawuli Nyekodzi.
What appeared to be any other day in Ghana turned out to be anything but normal when Patricia walked out of the bush, in 2007, looking for work with the WAASPS—A social entrepreneurship project in West Africa. The WAASPS provide—pilot training, build aircraft, maintenance, expertise for aerial survey, agricultural surveillance and plantation selection work, and more. 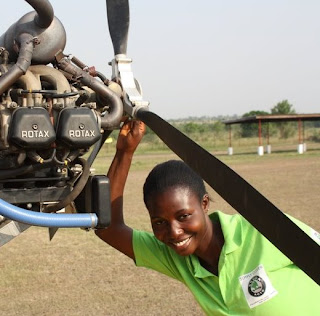 Captain Yaw did put Patricia to work. He stuck a machete into one hand and a mattock in the other and told to remove stumps. Little did he know the impact Patricia would have upon the world, when given an opportunity.
Captain Yaw says, “Patricia took to the task like a beaver, practically chewing the trees out of the ground.  She arrived early to work, walking several miles from the mud and thatch home, without power and where water was fetched from a standpipe, stayed late when needed, and turned up on days she was not working to watch the planes.  For this young lady the concept of learning to fly, becoming a pilot and become an engineer was an impossible, 'unallowable' dream. It was never envisioned that she would be a long-term part of the operations because the focus was on the wrong set of people.” 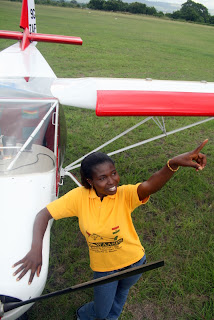 Patricia accepted her shrub-clearing task with focus, enthusiasm and determination, as she does with everything she’s involved with. One day, when the engineering assistant was caught stealing and taken to the police station, Patricia was asked to hold a wing. This task not only opened the door for her, but was an eye-opener for Captain Yaw. When Patricia asked more questions than all the staff combined, he knew she was something special. On a ferry flight she was given control and took to sky like she’d been born there. Captain Yaw said, “Her efforts and determination changed the face of the whole operation.”
Because of Patricia, young women were given new opportunities. Captain Yaw said, “They did better, tried harder, and were, demonstrably better investments of time, energy and finances.” Because of Patricia, the focus changed for WAASPS and Medicine On the Move toward educating and working with women. 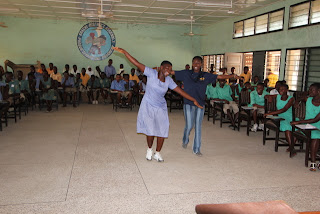 In early 2010 they started a small school, taking four girls per year, and trained them to build aircraft, perform maintenance, flight instruct, work with airfield operations, robotics engineering and computers. STEM education is alive and well in Ghana
Patricia came to Captain Yaw because she wanted to fly. And fly she has. With experience in the workshop and flying some ferry flights Patricia soon noticed that few women were learning to fly. She really wanted to be an instructor, and so she did. The best part of instructing? She loves meeting new people with different ways of learning, and the challenge of teaching them new things. 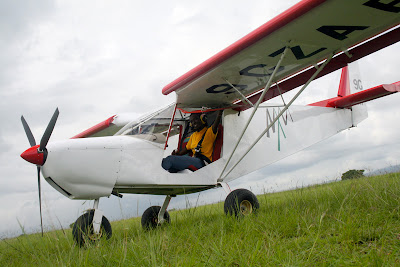 This amazing woman is setting a new level for firsts, as: 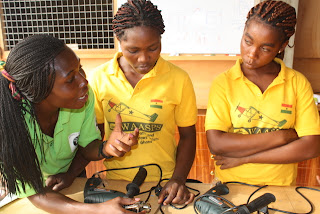 She is now teaching, engineering, flying, photo-video missions, training, conversions, and check rides. What she loves about flying? “Everything. Especially the fresh air that takes away all of your worries and the ability to view the world in a different way.” 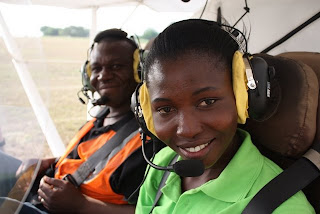 Last year, for the centennial of women pilots event, Patricia, with the help of three male pilots, flew 97 women in one day. This year, March 5th, Patricia and Captain Yaw have invited 100 children from rural communities to have an air experience. Last year it was girls only. This year they are targeting 60:40 Girl:Boy ratio. They’re searching for talent to bring 4 girls to go on their 4 year training program at Av Tech academy. 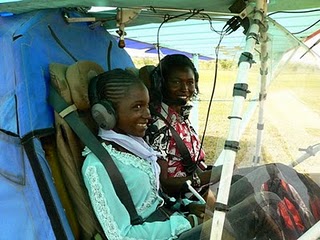 When asked what motivates her, I’m told, “Being in the air.” Captain Yaw says, “The only thing that will absolutely bring her down is fuel, or rather the lack of--- she is like an eagle, just wants to be up there, loving every minute of it.”
Patricia has shown that hard work, dedication, commitment and perseverance opened the door to her dreams. She is an inspiration to all. I cannot wait to return to Ghana and meet her. 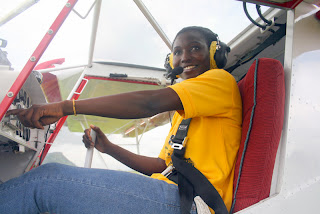 Keep flying strong Patricia! You are making a difference in the world.
Enjoy the Journey!
~ Karlene
Posted by Karlene Petitt at 12:02 AM