Honolulu Eastbound we had a FAA inspector riding in the flight deck, a prisoner in the back, two FBI agents and an armed guard. The prisoner was a woman... the scariest kind. The making of a novel.

Once again we had a FAA inspector riding with us, this time: John Endicott II, and John is assigned to the Delta Airlines certificate. He has quite a story, and unfortunately through my journey I lost my notes. How can I write this without notes you ask? Well, his story is one of inspiration ... and another indication that life works out like it should, despite the obstacles that are thrown at us. Yes, I remember his story. I may not have the exact dates... but he made an impression, and I'm glad to know him. 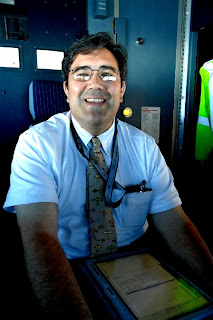 John Endicott, II
Like many teenagers, John's idea of education differed from his parents. He joked about being on the 5 year plan... or was that the 7 year? He loved mechanics and his parents made a deal with him... they would pay for college if he was willing to take classes they thought beneficial, in addition to those he enjoyed. What a deal, and he was soon a student at Embry Riddle.
He ended up buying an airplane, Piper Warrior, and took flying lessons across the street from the University at an FBO, where he set up lease back with his plane. He was flying, studying, and working towards a career as an airline pilot. He also fell in love, and married the woman of his dreams. Unfortunately, on his honey he suffered a Grand Mal Seizure in his sleep. Waking up, he felt like he'd been in a fight. We can only imagine what his new bride was going through.
They returned home, and were at his parent's house. He wasn't feeling well so he decided to take a nap. His wife and parents heard him fall off the bed, and by the time they'd arrived in his room, the bookshelf was on top of him. Yes, another seizure. Long story short, they discovered that he was suffering from seizures from Nutra Sweet. His Diet Cokes were the culprit. He lost his medical, but after changing his diet... eliminating artificial sweeteners, the seizures stopped. The FAA prohibited him from obtaining a first class medical until he could go three years without.
John graduated from Embry Riddle with a maintenance/management degree. His flying was put on hold, but not him. One day he was across the field, at the FBO where he kept his plane, and he noticed somebody walking by a hangar. They began talking, and this person had recently purchased the hangar and the 6 un-flyable airplanes inside. The new owner asked John if he knew anyone who could get them in the air again. And a relationship was born. John fixed his planes and then followed him to ... Texas! Where John continued to fix airplanes that had been in crashes.
He soon left to expand his horizons. He ended up at ValuJet and became the Director of Maintenance planning. When AirTran purchased Value Jet, he was one of the few Directors who stayed with the company. His new position with AirTran was Manager of Technical Publications, and in that position he worked closely with the FAA and they encouraged him to join their team, which he did.
He is now the Geographic Safety Inspector, Airworthiness, and working on Delta's certificate. When we landed in Honolulu, his first time there, I listened to him speak with one of the mechanics. He didn't head off to the hotel, instead he pressed on and jumped into work. We already had a long day, but he is a man with heart, and a job to do.
I enjoyed the opportunity talking with John on the flight over. The thing that impressed me most about him is his commitment to safety. He truly cares, and works with the system, the airline, and the industry to make our airline and aircraft as safe as can be. His motivation is purely selfless in the line of safety. Nice to see.

It was a pleasure to meet you!
Enjoy The Journey!
~Karlene
Posted by Karlene Petitt at 1:23 AM