V-Tail Bonanza Debate is on!

In search of a plane...
A friend we will call Pilot 1 is helping me search for a plane. He sent me this link to a V-tail Bonanza that I thought was awesome! I happened to be discussing another issue with two pilot friends, and asked them to look at this. Below is what transpired.

I sent the link to two pilot friends, one in general aviation and the other an airline pilot who owns small aircraft, to ask their thoughts. We'll call them Pilot 2 and Pilot 3. Below are their responses.

"As far as the Bonanza goes....... They do make the best airplanes. I am NOT a fan of the "V" tail. Lot's of unexplained crashes in those things, including a few friends of mine who where well experienced. Anyway, I would not give much more than 45K for that model & vintage. As a friend, I would rather see you in a straight tail Bonanza. It's a buyer's market for any commodity aircraft. My recommendation is never finance an airplane, always pay$$$. Otherwise, it is better to rent."

"I agree with Pilot 2.  The V tailed airplanes are a neat concept but they have had issues, especially older ones. The model you should look for is F33 (4 seats) or A36 (6 seats). Both have conventional tails and are good airplanes. There's no arguing a bonanza will do what you need. Another thing to consider is the location of it.

You will need a pre-buy inspection done by a mechanic (usually takes just a few hours but can get costly if away). I think it's important to use a trusted mechanic but I know you've been away from general aviation for a long time. Using a mechanic at the location of the airplane is difficult because you don't know their work quality and they may charge too much as well. I only bring this up because I noticed it was in Tulsa. I'll keep an eye out on my end for good bonanzas. They can be hard to come by because they are popular!"

I shared both these responses with Pilot 1.
Below is his response.

Pilot 1:
Old Wives Tail Alert! Both are wrong. Here’s why:

In the 1940’s Beech came out with the Beech 35, which used a V-tail design to reduce drag and create a high performance design. Because the tail only has two surfaces, they have to do the work of both the vertical and horizontal tails and use “Ruddervators” to do it. The result – less wetted area, less drag.

The downside – susceptibility to flutter because the two ruddervators are not interconnected. So you do have to be careful that they are properly balanced, and have any tail work done by an expert. As there were 15,000 built, those experts are reasonably available.

In 1951, in order to ensure greater stability and to provide for growth of the aircraft, Beech enlarged the tail twenty percent. To avoid a major structural redesign of the tail and to avoid new tooling costs, Beech did not move the location of the front tail spar. When Beech modified the tail, much of the increased size was placed ahead of the front tail spar. This left the spar sixteen inches behind the leading edge of the tail. This was a bad idea.

When at high speed (above VNE) in rough air (think thunderstorm or VFR-into-IMC and a resulting steep spiral dive), the leading edge of the diagonal tail could be deflected up or down because the support structure (spar) was too far back. The result was a series of in-flight break ups, a reputation as the “forked tail Doctor killer”, and an FAA study. The FAA concluded that rather than the V-tail Bonanza being an unsafe airplane, the Straight Tail Bonanza was cited as an unusually safe airplane.
About the same time as the FAA study, the NTSB (National Transportation Safety Board) conducted its own study. The FAA study had examined in-flight break-up for a wide variety of aircraft. The NTSB study examined the accident history of light, single engine fixed-wing aircraft. The conclusion of the NTSB study agreed with the FAA study. And that was before the AD. They concluded the a/c met certification requirements, and the primary issue was pilot error – in other works, Doctors were Forked Tail Bonanza killers, not the other way around.

However, out-of-envelope in-flight break ups continued, and eventually, Beechcraft and the FAA gave in, and issued a mandatory AD (94-20-04 R2) which required 2 things: the addition of strengthening “cuffs” that hold the tail leading edge in place, and immediate and repetitive 100hr inspections of the rear bulkheads (where the cuffs attach). If that AD has been complied with and the bulkheads are not deformed, the aircraft is perfectly safe. If it hasn’t, run away and tell the FAA – the aircraft is not airworthy. It’s easy to tell – look where the leading edge is attached to the fuselage (not my plane):

The University of Texas Study

So my conclusion is, even without the cuffs, if flown properly and kept within its performance envelope the V-tail was a safe airplane. With the cuffs and AD inspection compliance, it’s very safe – as safe as the straight tail. No other light aircraft has been as studied as the V-tail Bonanza. V-tails continued to be made until 1982, but their reputation as being somehow less safe, deserved or not, never went away. 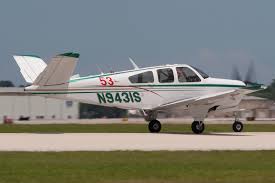 This is of course still debated almost daily on Beechtalk between the V-tail owners and the C33/A36 owners, just as the twin vs. single debate is ongoing daily between the Bonanza, Debonair and Sundowner pilots and the Baron, Duke, and King/Queen Air crowd. The truth is, any high performance aircraft can get you in trouble if not flown within its limits, or within the pilot’s experience and knowledge (see JFK Jrs flight on a moonless night, over the ocean, in a Piper Malibu, without an instrument rating or IFR plan).

There you have it.
The V-tail Debate continues.
What do you think?