Lighting Up the Night 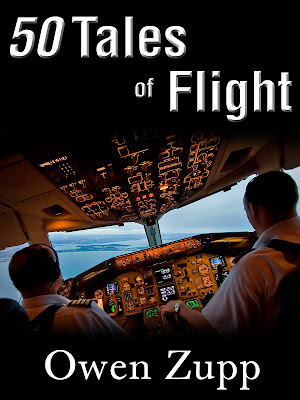 The four engines hummed hypnotically through night sky over the Pacific. While Honolulu sat only a matter of miles away, the passengers on board the Boeing 747 were blissfully unaware, curled up beneath their blankets in the darkened cabin. The cabin crew chatted in hushed tones behind the galley's heavy curtains, planning their shopping strategy when they arrived in San Francisco in a few hours time.

On the flight deck the tone was also hushed so as not to disturb the resting crew at the compartment's rear. The aircraft continued to track faultlessly along the magenta line on the instrument flight display as the 'Top of Descent' indicator and San Francisco edged ever closer down the screen. I called up the latest weather reports through the aircraft's onboard system and shared them with my fellow pilot. It was set to be a beautiful day, but we ran through all of our available options and fuel status to ensure that all our bases were covered.

The first rays of the sun had not yet crept above the horizon but a portion of the upper atmosphere was just revealing the first traces of the new day. A light, faint haze met the curved shadow of the earth's outline in an arc that spanned the horizon from left to right. The day was encroaching on the stratosphere, but not yet on the earth below.

The first indication that something special was taking place was not visual in nature. It was the chatter of American crews transiting the busy route between the mainland and Hawaii. “Can you see that?”, “What is it?” and “Is someone starting World War Three?” The exchanges peaked my interest, but gave no indication of the location or nature of the commotion. Then there was a hint. “There. On the horizon. Down low. It's brilliant!”

I leaned forward in my seat and peered into the darkness below. Nothing. Resting my arms on the top of the instrument panel, I cupped my eyes with my hands to keep the glow of the instrument panel to a minimum. Then I saw it. A tiny, bright intense light, like the tip of a white hot arc welder. Almost stationary, it was growing larger, ever so slightly. Seemingly in a matter of seconds it grew from a needle point to a distinct flame, growing both in mass and momentum at a rate that was difficult to comprehend.

“What is it?” the other pilot echoed my thoughts, equally astounded. Still it grew each and every second to a brighter and more impressive light, seemingly darting skyward. There was no perspective available to gauge distance or offer an idea of its size; just an ever-increasing intensity. Then someone identified the UFO that was captivating every crew aloft that night. “It's a launch out of Vandenberg.”

A rocket launch from the US Air Force base on the west coast. Now everything made sense. It was hundreds of miles away, but so powerful that it was clearly seen by every aircraft in the flight levels and as it climbed it seemed to grow in speed as its trajectory could now be viewed in profile. Up through the darkness and onwards towards the illuminated upper atmosphere, the rocket would reach the daylight before the night's end for any of the citizens below. In an absolutely spectacular display of sheer energy, the projectile closed in on the arc between night and day, dark and light. One almost expected it to tear through some barrier between dawn like ripping fabric. And then it virtually did.

Just as its furious flightpath penetrated the arc.

A flash of light that seemingly lit up the night for an instant before a mammoth expanding ring of vapour exploded across the sky. Like those TV documentaries that show the final burst of light across the galaxy from a dying star, such was the scope of this amazing sight. In reality it was the rocket jettisoning a stage of its cylindrical being to leave the 'sharp end' to continue its journey into 'earth orbit'. Bound for space and relieved of much of its load, the remaining portion seemed to accelerate ever-faster and ever-higher. I craned my neck to look skyward and follow the lone beacon as it roared away and finally faded from my mere mortal sight.

It had departed as quickly as it had emerged. All that now remained was the ring across the horizon which was now merging with the moisture to develop into a cloud system of its own, like an atmospheric calling card. Its passage had been silent, but its impact was immense.

Over the years, I have been very fortunate to see many wonderful sights from this treasured vantage point in the sky, but that pre-dawn morning off the west coast of the United States will always rank very highly. In a matter of minutes, a simple light had transformed the sky and left everyone who had witnessed it breathless.

Meanwhile, the four engines of the 747 still continued to hum hypnotically and the cabin crew chatted while the passengers slept, blissfully unaware. But for this boy from Sydney, Australia, I would never look at the night sky quite the same again.