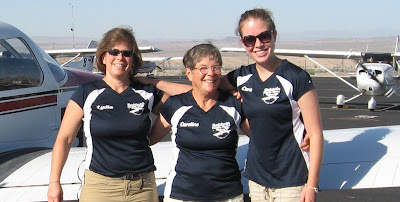 Flying is a Family Affair!

Three generations of women take to the sky to race in the Air Race Classic, the longest running all women pilots transcontinental air race. Among the many teams, there is none other as special as a family that flies together. 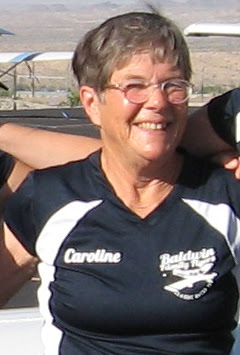 Caroline grew up in Hingham, MA, married her high school sweetheart, and moved about the country and world with his careers in the US Navy and international banking. When their children were all off to college she and her husband returned to school in Boston to earn a masters in library and information science. Caroline then went to work for a consulting company. Almost twenty years ago, she and Bill moved to Silver City, NM, where Caroline sings in a woman’s chorus, plays French horn in a community band, and volunteers for the local literacy organization that she founded twelve years ago.

But more than that... she flies!

"I have always been interested in flying, but never had time, money, opportunity until after moving to Silver City, NM in 1993, where I became friends with a woman pilot who took me up in her C210. I started looking for other opportunities to fly. Other members of the Grant County Pilots Association took me flying. I'm now Secretary/Treasurer of that organization.

In April, 2002, my husband Bill and I helped at an auction fund-raiser for the Air Race Classic (ARC) 2002 start in Silver City. Bill purchased 2 hours of flight instruction for me.  Unfortunately, I was not in SC for the excitement of the ARC start. However, at the end of June, 2002, Bill and I drove from Cape Cod to Portsmouth, VA so I could fly with a racer friend back to Silver City - just for the experience! And, it was a great adventure for me, especially when the electric went out on the plane. 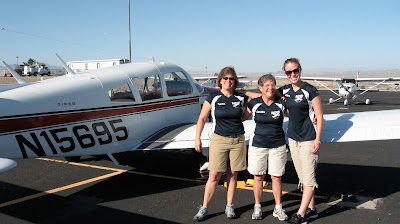 I've been a very thrifty New Englander all my life. But I convinced myself (with help from friends), after my mother and aunt died and left me some $, that it would be OK to spend it on flight lessons. I started  in Oct., 2002. I passed the practical exam for Private Pilot on May 17, 2003 (on my husband's birthday). After summer in the East, I learned on our return to Silver City that there were no rental airplanes within a 2 hour drive, so I purchased a Piper Cherokee in December, 2003. Since then, I have participated in eight Air Race Classics and will race again this year with the same team as last year: my daughter as co-pilot and granddaughter, a student pilot, as a teammate.

My training for certification was in a C172. I did get checked out for Complex and High Performance airplanes in November 2003 after instruction in a C210. Also, before finding my plane, I enjoyed taildragger instruction in an Aeronca Champ.

Now I am preparing for Air Race Classic 2013. Recently, a friend and I worked for two days to clean and wax the plane, making it race-ready. Last week, I completed the required, specified handicap flight. Race crews fly against their own handicap speeds, trying to best their own top speed as they fly from stop to stop. My handicap flight needed the cool early morning, a time when we could find the required 6000 feet density altitude airspace here in this high desert country. My home airport is at 5446 feet. 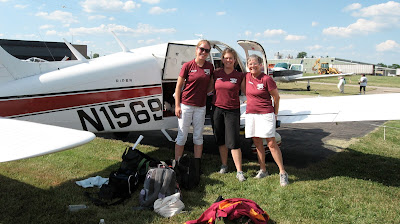 In the second week of June, I'll fly to Ft. Collins to pick up Lydia and Cara. Then we'll fly on to Pasco, WA where Air Race Classic 2013 will start on June 18. There will be check-in, aircraft inspections, and racer briefings. To date, forty-seven teams have registered. Racers have four days to complete the route. Within the constraints of daytime VFR rules, race crews will face challenging decisions and conditions to complete the “perfect cross-country”. From the start in Pasco, Washington, racers will fly timing lines at en route stops in Idaho, Utah, Wyoming, South Dakota, Nebraska, Colorado, and Oklahoma, with teams celebrating their accomplishments in Fayetteville, Arkansas. Youth aviation events are planned for both the start and ending weekends." 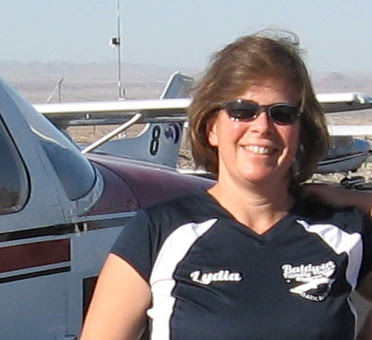 Lydia, Caroline's daughter, is a nurse manager in charge of 40 nurses  at Poudre Valley Hospital in Ft. Collins, CO. While Hingham, MA was primarily her hometown during her youth, she lived and attended school for a year in Luxembourg, six months in Kuwait, and four years in Zimbabwe. Following college, Lydia worked a couple of years on “the big dig” in Boston managing the engineering documents for those new highways and tunnels, and saving funds for more travel. After extended travel in the Mid-East, China, Australia, and Europe, Lydia began preparing for a career in nursing. She is now working on a masters in nurse management.

And she flies too!

"In 1984 I flew as a passenger in a twin engine plane across the savannah in southern Africa. I was with my family en route to stay at a lodge in a national park. Viewing the magnificent land and natural resources from a small plane was magical.

Twenty years later my mother, Caroline, was a pilot in the Air Race Classic and owner of a lovely little single engine Piper Cherokee. Caroline has always been an inspiration to me. She embodies being genuine, living with integrity, courage, love and a sense of adventure.

Mom and Dad moved to the Southwest USA to enjoy the open sky and comfortable community. There as well as in my community of northern Colorado, the sky is welcoming to general aviation pilots. Though certainly becoming warmer and more dry over time and compared to the eastern seaboard, the weather follows a typical pattern of abundant sunshine and relatively predictable winds. These are favorable conditions for flying. Also, here in the West, we enjoy less population density. To be aloft with the grasslands of the eastern plains, the beautiful rocky mountains to the west and the occasional challenge of a wind shift to stir the cognitive waves is truly wonderful. Flying is exciting, thrilling and personally empowering. 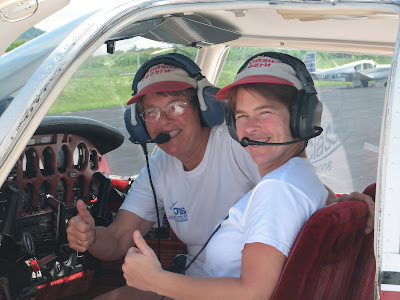 For years I did not realize what the forces were that contribute to making the large mechanical structure lift into the air and maneuver about at the direction of aviators. Gaining the know-how and zest for aerodynamic magic is powerful. Now I know and now I can fly!

In 2008, en route to a vacation in Glacier National Park I visited the start of the Air Race Classic. Wow! I admired and regaled in the intensity and energy. Upon arriving home I became determined that I too would become a pilot. On July 11, 2008 I took my first flying lesson. In the winter of 2008-2009 I was invited to be a part of Team Wild Mama for the 2009 Air Race Classic. I was honored and grateful for the experience. We flew more than 2000 miles from Denver, Colorado around the heat of southern states and finished in Atlantic Iowa, four days later. 38 days later I received my private pilot certificate at KFNL in Loveland, Colorado.

Now, we are looking at the mounting excitement to fly in the 2013 Air Race Classic. For the second year in a row I have the privilege to fly with my pilot and mother Caroline and our teammate Cara. Cara is a beautiful and lovely woman who is finding the joy of flying and embracing the companionship of her aunt and grandmother. We had a fantastic time last year and look forward to more fun as a team. 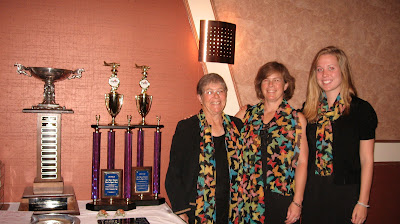 Maybe this year the trophies will be theirs?

I also enjoy flying during the rest of the year (outside of the blitz of wild fun in the latter half of June for the Air Race Classic) with my husband. He is also a pilot. We support each other to learn, enjoy and be safe in the air. 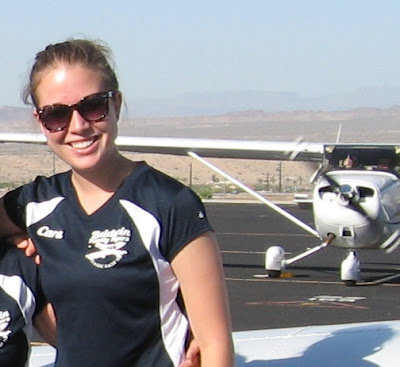 Cara is Caroline's granddaughter. At 17-year-old is in her junior year at Morgantown, WV high school. She has had flying lessons in a C152 and C172, but the weather has cancelled many more. She is president of her high school German club, swims on the high school swim team, plays on a traveling soccer team, and volunteers at the hospital. Cara has been fortunate to travel abroad – six months in Klagenfort, Austria when her father had a Fulbright post at the university and a few weeks in Portugal last July when her father was teaching a course at the university in Oporto. She plans to study history in college.

Cara is not only flying through life as a leader, but she's flying planes too!

"I decided I wanted to learn to fly because both my grandmother and aunt were pilots. They would talk about it with such enthusiasm at family events that I became interested. About a year and a half ago was my first lesson, it was fun! Landing is the most challenging part of it so far. Unfortunately I haven't had many lessons because of the weather. It seems like every time I schedule a lesson, it rains! I hope to get my license before graduating high school next year, if not sooner"

So there we have it...
This is what happens when we expose our daughters to the gift of travel and flight. The skies of opportunity open.

Please give these women the encouragement they deserve for their race.