I have a co-worker who is in charge of our flight operation - he’s our Operation Officer, for those that know USAF vernacular. He’s a great kid (everyone is a kid who is more than 10 years younger than I), and an extraordinarily good aviator in my book. In his time in the USAF, he earned many accolades, graduated at the top of several of histraining programs, and performed awesomely (is that a word?) in combat. I think his best characteristic is that he has a down to earth life philosophy. How do I know any of this? When you’re flying across the country in a Beech 1900--i.e. C-12J or stretch KingAir--you have lots of dead time to talk about things. 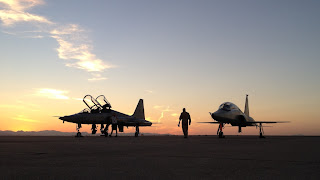 This can be personality-dependent, meaning some instructors are more "intense" than others. A standard USAF pilot training classroom is a big open room with about 10 little tables set up in a circle forming a perimeter around the room. On the outside of the circle sits an instructor. On the inside are his students, usually two. Most classes have about 20 students, two per table. An instructor is responsible for most of his student’s training, which includes grilling them with whatever question he thinks of. Of course, the situation is wide open. Everyone in the room can see or hear what’s going on.

Early in his training, he was suffering through one of these grilling sessions. His instructor was really giving it to him. The questioning even goes off the beaten path into regulations students are responsible for yet are not normally evaluated on. Some “special” instructors go off like this simply to be abrasive or to show how little a student knows. Of course, my friend is missing questions, which makes the grilling even more intense. Even though his knowledge level is commensurate with any of his classmates, this instructor is making him feel like an idiot because of the many questions answered incorrectly.

Back at home that night, he cracked open those regulations and studied them all. He tackled other regulations his instructor hadn’t questioned him on, thinking they were next. My friend told me all he wanted was to not appear so unintelligent the next time this instructor put him through the ringer--he didn’t want to “suck” as bad. This meant putting in a way over-the-top study effort that night and not getting much sleep. The next day, the instructor starts the grilling on esoteric regulations, yet this time my friend is answering questions correctly. This doesn’t stop the instructor. He just keeps pressing to find anything my friend doesn’t know until the instructor runs out of energy, a bit unsatisfied with not showing how little his student knows.

With the open classroom it was clear to everyone what was going on, what this instructor was doing, and how my friend was being picked on and despite this was performing well. He told me afterwards his classmates came up to him asking “Hey man, how did you know all that stuff?” To which he replied, with desperation in his voice, “If you stayed up all night reading this stuff, you’d know it, too.”

I had my share of “special” instructors over the years. I had one in pilot training who was particularly snarky. This guy was our flight commander. As a result, he usually flew with the most senior student--i.e., me. This meant I flew with him all the time. When asked what it was like to fly with that guy I usually responded “the best thing is he didn’t have to fly with anyone else.” I kept myself as well prepared as possible, even though I was well-versed in military aviation knowledge from my previous training as a Weapon System Officer. My whole objective was to prevent giving this snarky instructor the satisfaction of showing off how little I knew by missing some tiny knowledge detail. I
think I succeeded.

There are many sources of motivation people can tap into for achieving excellence. I can definitely connect to not wanting to “suck,” as my friends mentions. I figure whatever works, works. If it has to be not “sucking,” good. If it’s something else, so be it. Just have anything to motivate you, to focus on. If that helps you move forward, even if it's a gigantic effort, it’s a good thing.

Tom
Posted by Karlene Petitt at 5:00 AM