I received this message, attached to the following recount of an accident.


"This happened this morning in KPWT (Bremerton WA).  Names have been removed.  While I am not certain, I am willing to bet that said "Ferry Crew", and I use the term as loosely and derisively as possible, was more than likely one of these 500 hour wonders who offer to "ferry" for free to build time.  Well, so much for at least one jackass's airline aspirations.

You get what you pay for.

The lowest bidder is very rarely the best choice.  When will people start to understand this.  This guy buys a 100k airplane, and wants to save a couple hundred dollars on an experienced crew.  Unfortunately this isn't limited to the little planes, I see the same crap from idiots that want to fly 737s for cheap or free half way around the world.  I don't see plumbers coming to your house for free to "build time".  Don't work for FREE and more importantly, don't hire those that offer to do so.  Rant over"

I spent the better part of this morning looking for accelerated aluminum particle damage to aircraft in the hangar and on the ramp. A Cessna 172 took the brunt as it had the unfortunate proximity to the particle accelerator (I never knew that aluminum and steel could have such a severe reaction to each other). A broken windshield, passenger window and various skin dings to the Cessna was the worst to any of the recipient aircraft. 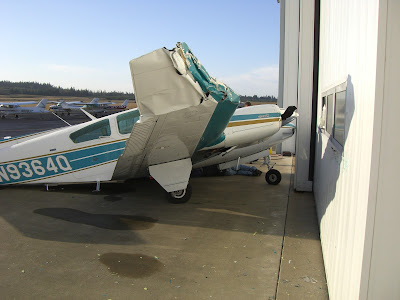 The hangar (the steel in the equation) lost a plastic window with frame and some door panels. A portion of aluminum was found on the ramp around a 100 yards away. Unfortunately Raytheon has discovered (yea I know it is Hawker now, but they don't fit my story for you pilot types, so shut up!) better ways to accelerate uranium and cause more damage. I mean that said velocity inducer is no longer in production and am afraid that the once pristine machine will head for salvage...

The Baron had been in our care for years, owned by a loving "Heavy" driver and if there was a problem with the girl, the response was "Fix It!". Sadly the circle of life was completed and a new owner found in Texas. Apparently the aircraft was removed from its hangar by the ferry crew, tried to start and did not due to a dead battery. We "jump" started it, brought it down to the maintenance hangar, put a charger on and it seemed to be "happy" at 5:30 pm last night. Around 6:00 am this morning the ferry crew tried to start the RH engine (enough battery to prime, but not to start), decided to "hand prop" the bugger and move on with no one at the controls... 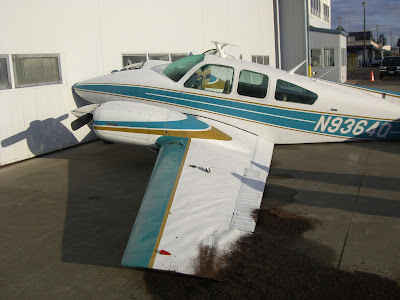 Brakes set, Throttle WELL ADVANCED, "HOT" mags, hydrocarbon vapors coursing through the induction system with sufficient oxygen for stoichiometric combustion...
HMMMMMM...the three sides of fire; FUEL, OXYGEN, HEAT (spark, yes just a Little one as the snap of the impulse coupling is heard, I think the declaration would be "OH SHIT") . 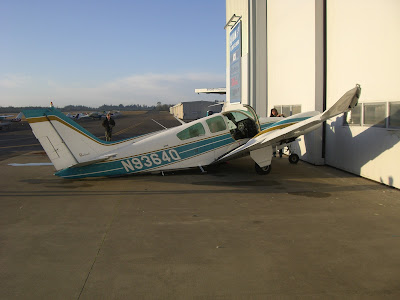 Anyway the RH engine drug her around to the right as it was parallel to the hangar, prop hit the window frame scattering shrapnel, pushed the hull up on the left wheel loading it laterally and breaking the trunion causing it to collapse, while the nose strut received a lateral "shot" also (torn sheet metal on nose bowl and tunnel). 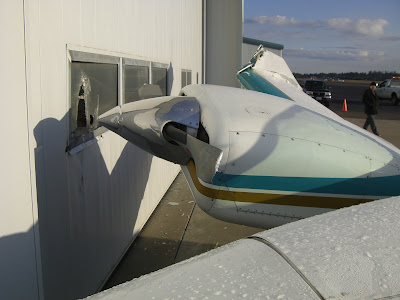 Both wings, fuselage and tail feathers on LH side are wrinkled, RH engine blew the starter off the adapter (I first saw a snap ring on the ground and thought "that's from the starter adapter", retaining a bearing and then it was "No way is that what I think it is, it has to be from the collapsed strut!), broken engine mount legs. She rattled so hard that two of the radios in the panel started backing out of their trays...just plain or is that plane ugly! 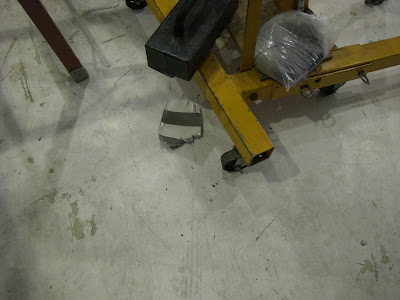 The good news is that neither of the ferry crew were with a scratch! Fuel load was all she could take (100 plus gallons) and no fire!!! What looks like dirt, is absorbent from the fire department to contain the leaking fuel.

Interesting commentary. What do you think?
How do you build time to get the experience needed?

Enjoy the Journey!
XO Karlene
Posted by Karlene Petitt at 1:00 AM