Please welcome David Walker to Flight to Success. I know you'll enjoy his story as much as I did. David proves that a successful flight is one that we walk away from, and that lessons learned should be shared.

After you've read his story... you can find one of mine on his blog at David's Thoughts and Ideas.

My private pilot’s license was about two weeks old when I left Oklahoma City to fly to Bozeman, Montana, to visit my sister and her family in nearby Three Forks. On the return trip, after a long day of fighting mountain-induced turbulence and heavy winds at an airspeed of maybe 125 miles per hour in the Cherokee 140, I decided to stop for the night in Lamar, Colorado, instead of pushing on home. 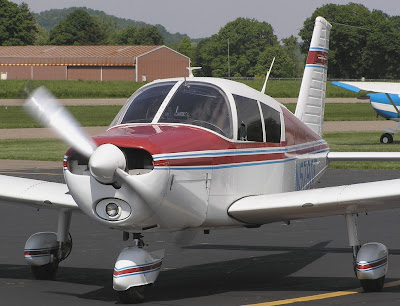 Prices back in 1974 were a bit different from now, and one of the things I remember about that overnight stay is that it was the first time I ever paid over ten dollars for a steak. The Cow Palace was a new motel at the time, and both the accommodations and the steak were excellent.

When I got out to the airport the next morning, I faced skies almost obscured by a thin cloud layer about 500 feet above ground level. I stewed for a few minutes about what to do, but I was already a day overdue getting back, and I decided to take off. I could see a couple of holes big enough to climb through, so I would be legal.

FSS told me the cloud cover went most of the way to Oklahoma City. Skies there were clear, but it was possible the cloud cover would extend there in the next few hours. At a distance of around 330 miles, the trip would take me close to three hours. I could be on the ground there before noon.

The takeoff and climbout were uneventful, and I was soon VFR on top. I set my VOR receiver on 118 degrees “FROM” to head for the Liberal, Kansas, VOR, noticing that the cloud cover extended as far as I could see in any direction. I began to wonder what I’d do if I got to Oklahoma City and couldn’t see the ground there.

Within minutes I decided to go back to Lamar and wait for the sky to clear, which it was predicted to do in an hour or two. As I headed back, I remembered a very tall radio tower several miles southeast of the airport, so I decided to stay west of my course to be sure of missing it.

Strangely, as I drifted to the left, which should have had my course on the VOR receiver to my right, it actually moved to my left. Startled, and keeping that tower in mind, I turned more to the west. The needle showed me more to the right. What was going on?

I was beginning to panic about that time. I saw ground through a hole in the clouds ahead of me, but was it safe to descend? Where was that radio tower? Why was my VOR receiver moving wrong?

About that time I noticed the receiver read “FROM.” I’d forgotten to reset it when I turned around. I quickly switched it and saw that I was indeed well west of the course, which was great. I had avoided the tower, and the Lamar airport is a bit west of a 298 degree heading to the VOR.

By this time I was rattled by the events of the last few minutes, and when I got to the hole in the cloud I almost dived down. Once VFR below, I saw the airport directly ahead of me and headed for a straight-in landing.

Trouble is, I’d forgotten I took off to the south into a bit of headwind. Now, landing from the south, I had that wind behind me. I got on the ground, but the increase groundspeed from the tailwind caused me to run beyond the end of the runway and onto some rocks that punctured one of the tires.

By the time I got the tire changed and was ready to go, the cloud cover had lifted, and I had a pleasant trip the rest of the way home. In retrospect, I was never in actual danger that morning, since I did stay away from the radio tower, but I did scare myself to death, particularly after almost killing several family members on the trip up to Montana.

I wondered afterward what the limit is for pilot stupidity on one trip.

David N. Walker is a Christian father and grandfather, a grounded pilot and a near-scratch golfer who had to give up the game because of shoulder problems. A graduate of Duke University, he spent 42 years as a health insurance agent. Most of that career was spent in Texas, but for a few years he traveled many other states. He started writing about 20 years ago, and has six unpublished novels to use as primers on how NOT to write fiction. Since his retirement from insurance a few years ago, he has devoted his time to helping Kristen Lamb start Warrior Writers' Boot Camp and trying to learn how to write a successful novel himself.

Thank you David. And if you would like to read my pilot stupidity story, it all started when I was nineteen years old and... Oh wait! You have to pop on over to David's blog to read why I almost killed myself in a plane by clicking David's Thoughts and Ideas.

Posted by Karlene Petitt at 6:57 AM