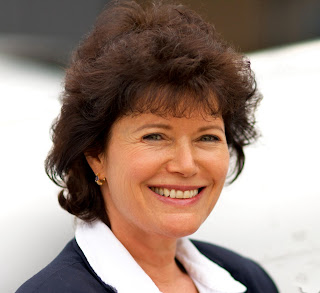 
Nola is a pilot, business owner, foster mother, and animal lover who plays the guitar, enjoys yoga, metaphysics and Eastern philosophy. She is a woman of integrity, strength, and compassion. Her life is a creation of dreams, perseverance, and giving of herself. 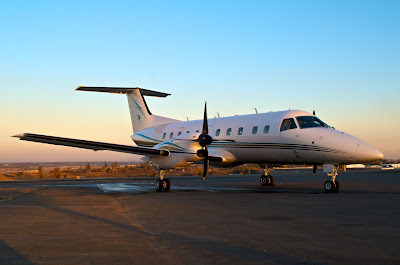 Living in Johannesburg, South Africa, Nola shared some exciting news... They added another plane to their fleet.

"This week I watched my former boyfriend take photographs of Swift Flite's newest aircraft, a thirty seat Embraer for our new website which will launch in a few week." To visit Swift Flite click HERE. Nola tells me this is, "The latest step in my unexpected career in aviation."

Nola grew up with the love of aviation thanks to her dad, an aviation enthusiast and private pilot who had owned and flown various aircraft while she was young. But it wasn't until her 21st birthday when dad gave her the gift that would change her life... the means to get her Private Pilot's license.


How did her dad feel about her wanting to fly?


"He was delighted as none of my three brothers had taken any interest in flying. At the time he had owned a share in a Baron 58 and he encouraged me to study for the instrument rating by dangling the carrot of flying his aircraft once I had that license. By then the flying bug had bitten, and I decided that a career in aviation was for me and I became a commercial pilot.”

Nola’s first job was flying that carrot— a Baron 58— for a construction company. She also did some charter work with the aircraft. At this point in her life, nothing was holding her back. She flew for various charter companies and progressed from a Piper Chieftain, to a Cessna 421 and on to a Conquest. 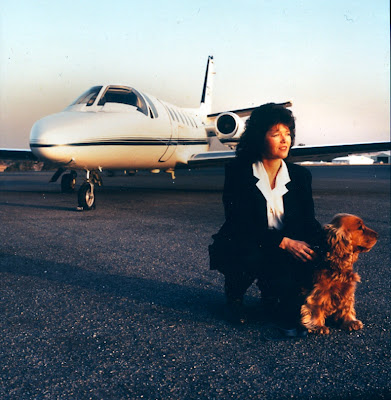 She was Aviation Manager and Chief Pilot when her company bought a Citation II. I can only imagine the excitement. “I was surprised, but over the moon because at that time there were only three corporate jets in the entire country. They sent me to the US for Flight Safety Training and I also got my American ATP and became a member of the 99’s club.”


The next 12 years she spent logging up to 3200 hours on that Citation. Just like every perfect flight there is always a little turbulence— “Oh, there was a two year gap in the middle during which I got married and divorced. Not the most successful thing I have ever done.” 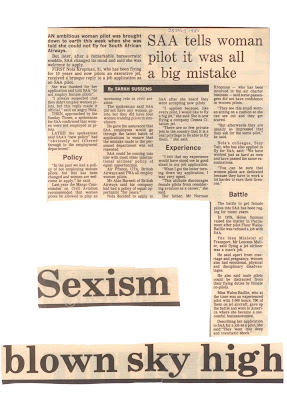 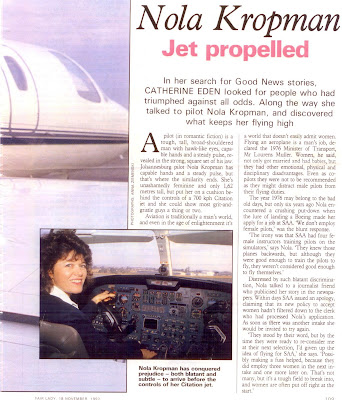 Nola had sent me these articles with interesting titles. Which obviously had me wondering what in the heck happened? 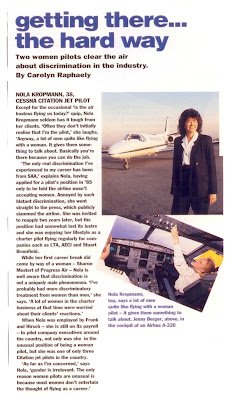 “When I started flying there were very few woman pilots in South Africa and none with our National airline. When I heard that South African Airways (SAA) were having a selection for pilots in the mid 80s I decide to apply. I felt that I had the right experience and had an outstanding chance.
Can you imagine my outrage when I received a letter from them rejecting my application on the grounds that I was a woman and that they don’t accept females as pilots even though they had a female simulator instructor at the time. I told my friend who was a journalist for our largest circulation newspaper who wrote an article which caused SAA to apologize and invite me to the next selection, but by then I was married. This did open doors because at this selection two female pilots were selected, a massive break through.”

Nola did open doors for others while her life shifted with an unforcasted wind. She created a new flight plan, and flew a different course.


“It was about 18 years ago that a fellow pilot, David, and I decided to apply for an air charter license. It was really just as a nest egg for our future, but as soon as we got it we started getting more and more flights and enquiries. This forced me into the office and I ended up putting all my energy into running and growing the business. I only flew enough to keep my license current, although my business partner still flies regularly. I even let my license lapse for three years but earlier this year managed reinstate it."

Nola has surrounded herself by strength and support, but she is the driving force. Dedication and hard work created the success that she deserves. And she’s my kind of lady supporting the protagonists.


“Our charter business Swift Flite has grown and is now an established player in the air charter business. We have been in the centre of the changes of South Africa flying the protagonists around. Ted Koppel flew with me in the Citation to interview Nelson Mandela in Cape Town on the day of his release. We fly businessmen into Africa, South Africa being the gateway to Africa, much of our business is in the resource industry and we were recently the first company in the world to submit to the BARS certification. We also have the pleasure to fly many tourists coming out to Africa on Safari. 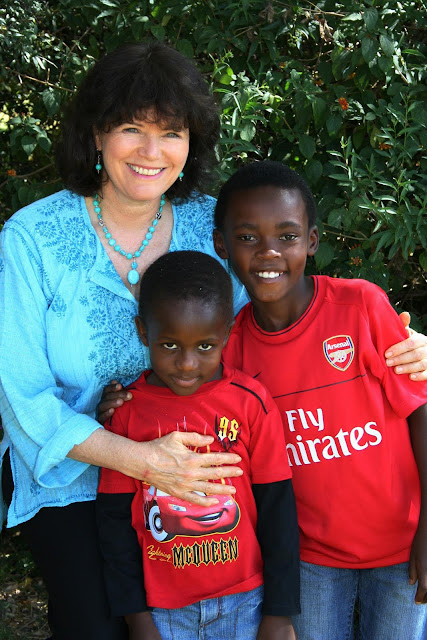 They own a few aircraft and manage a number of others, and Nola tells me Swift Flite's focus is on safety.

Nola has created a beautiful family. When she’s not working she is with her foster sons, ages 11 and 8. The 11 yr old has been with her since birth and the 8 yr old for the past 3 yrs.

“I am kept very busy juggling my time between my family, social life and Swift Flite. I am an animal lover and ironically have my hands full during nesting season rearing young swifts whom have fallen out of their nests and releasing them to fulfill their flying destiny.” 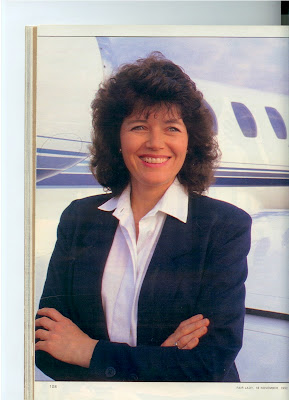 Nola thank you for sharing your story with us. You are an inspiration to all!


Enjoy the Journey!
~ Karlene
Posted by Karlene Petitt at 6:03 AM