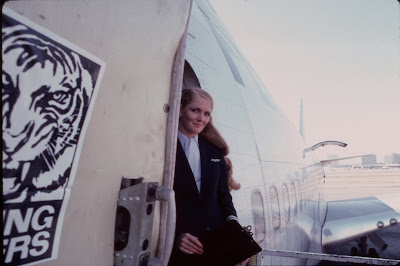 Norah’s life began the day she ran away from home to the top of Mt. McKinley after she’d learned her husband had filed for divorce, after three weeks of their working apart, and his girlfriend had become pregnant. In hindsight, I don’t believe Norah was running from anything. I think she was being pulled toward her destiny.

She’d been crushed and ready to make a change in scenery. Norah jumped at the chance to fly north and become part of a modeling shoot for skiwear. An avid skier herself, this was exactly what she needed. Being airlifted to the top of Mt. McKinley, for the five-day skiwear shoot, appealed to her on every level. But it wasn’t until she was leaving the mountain, would her life change forever. 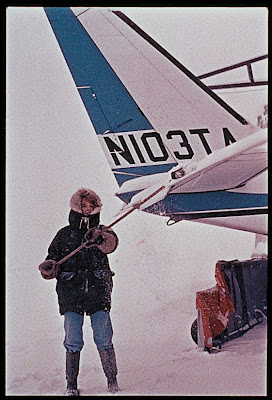 Norah with Navajo Chieftan in Fairbanks 1974
Having flown up the mountain laying down in the cargo compartment, strapped down with the cargo, Norah insisted on sitting in the cockpit on the flight back down. That flight changed the course of her life. It gave her direction and focus.

“As I looked out the cockpit window, I felt curiosity and wonder and fear, but I did not immediately recognize the welling up of need from deep inside me…. I was in love.”

This is how Norah’s aviation adventure began.

23-years-old, and no home to return to, she’d made her decision to learn to fly. She found a nighttime job in Kodiak Alaska’s most prominent bar, frequented by prostitutes. She worked all night, slept for a few hours in the morning, and took flying lessons in the afternoon before she went back to the bar to work. Living in a furnace room of an old house, she exchanged housework for rent, so every penny could go to the airport. She learned to fly, became an instructor, then became a charter pilot. 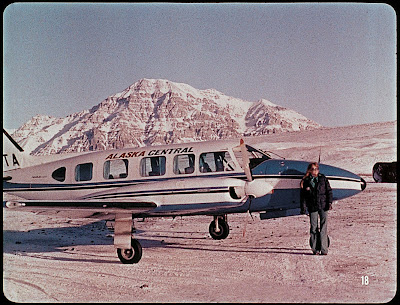 For those of you who’ve flown in Alaska know that this type of flying either ends in death, or becoming an extremely competent pilot. Norah survived. She survived equipment failures, fatigued-filled hours of flying all night through the mountainous terrain in IFR conditions, and the torment of being a woman breaking into the male domain. To say she wasn’t accepted would be an understatement. Norah was breaking ground for all women pilots to come. 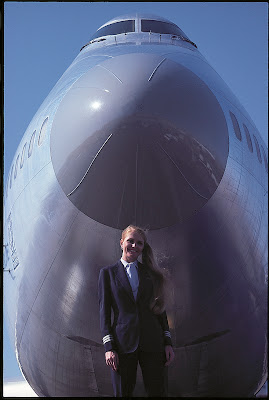 She eventually departed her Alaska job after she was hired by Flying Tigers—their first woman pilot. To say the boys embraced the concept of a woman would be a lie. They embraced the challenge of trying to drive her out. She was known as C-1, and the stories Norah tells in her book Flying Tigress, will shock you, make you cry, laugh out loud, and you will understand what my early predecessors went through. I know C-4 at Northwest, and those days were not fun for the ladies. But they survived, and they did make a difference for the rest of us. Those shocking stories, they're all true. And this is where truth is stranger than fiction. 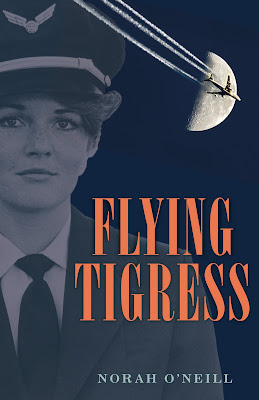 Flying Tigress is one of the most captivating books I’ve ever read. It carried me down memory lane, and unearthed memories that I’d forgotten. Norah’s prose takes you into the cockpit for an instrument approach into Hong Kong, just as if you were there. If you love aviation, you will love Flying Tigress. Share a piece of history. It's a tribute and honor to the ladies who paved the way into the commercial airline world. I laughed at Norah replacing the penthouse photos with playgirl in the cockpit. I did the same at Evergreen.

The long nights. The laughter. The tears. The death of friends. She’s seen it all. She struggled with balancing motherhood and flying, marriage and trust. She fought with loneliness, the need to love and to be loved. Her story is honest, open and riveting. 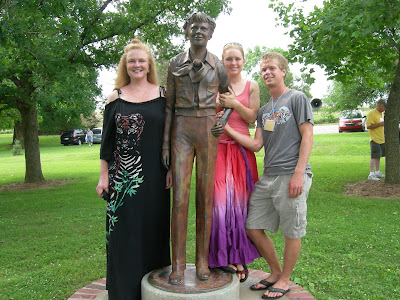 Flying Tigress is a story of adventure, humor, heart-break, sorrow, strength and survival. It’s beautiful. Her life was an adventure. We fly for many things. Sometimes we end up soaring the world in search of meaning. Sometimes that meaning is in our own back yard. We give our life to the lust of Aviation, and it strips us of everything. But it also gives back so much more that it takes.

Noah’s last flight—“I contemplated the phrase I’d heard, that life was not measured by the number of breaths one took but by the moments that took one’s breath away. I thought of the other marvelous things I had viewed from the cockpit. These were God’s gift to pilots: snow crawling down the Rockies, sunrise over the Grand Canyon, the vast green mat of the Amazon jungle, the twisting silver road of the Mississippi, and the top of Everest—a cone 10,000 feet below. I had seen the Great Wall of China curving below, the harbor at Rio, the starkness of the Australian Outback, the towering plume of Mt. Saint Helen’s ash, the curvature of the earth at the North Pole the deep blue of the stratosphere. I had crossed the equator, awed by sunstreaked evenings, dappled earth, velvet night, and spun-silver clouds. I flew inside God’s weather; saw horizontal rain and contrails. On night over the north slope of Alaska, I turned off my small plane’s lights and flew, just a dark spot against the starry skies, in to the green and yellow and pink of the dancing of the Aurora Borealis.” 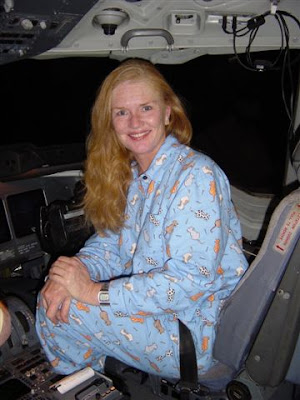 Wearing her favorite uniform, the cat pajamas in MD-11 cockpit over China 2002 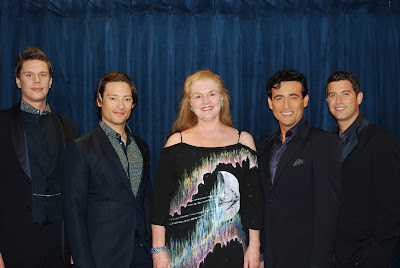 Norah, it's an honor to know you. On behalf of all the women pilots, we thank you for opening the doors and standing strong while they were slammed in your face. You did make a difference in this life for many. Thank you.