What happens when you return to an airport... and plug in an approach to 27R, but you decide not to use that runway because the ILS is down, so you select the approach to 26L. But the map still indicates a line to 27R? These are the little things that can create confusion during an already busy time.

They say pictures speak louder than words... I think so. 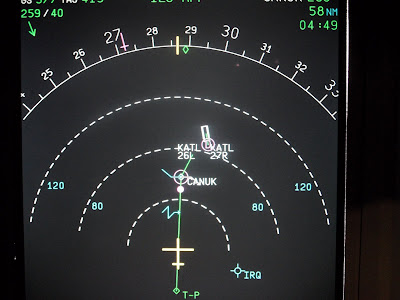 Note: The arrival was for both runways. The end of the green line is where ATC will vector you to the runway you're landing on.

The question was... why this map display?

My friend at Airbus has the same philosophy as I do: It's within your network that you find the answers.

He says, " I learned long ago that it’s really about having a network of people who are a lot smarter than I am on such topics... here’s what they answered – after they both said something like, “sounds like it was a return to the departure airport to me”


"This would be a normal display (technically speaking) if the flight departed from 27R and landed on 26L.

Although the departure threshold is sequenced in the FMS at Take-Off, it remains displayed on ND for the rest of the flight. However one does not frequently have an opportunity to see this, as generally you are landing at a Destination airport different from the Origin airport. 27R appears to be white on the ND, which would again suggest that it was just displaying the departure runway.

Looking at the scale that the ND is set at, my guess is that the two runways are superimposed on top of each other. In fact as they got closer and reduced their range both runways would have appeared separately – the landing runway in green and the departing runway in white. The fact that “26L” is displayed on the ND also leads me to believe that indeed runway 26L was there and would have been seen if the range were reduced."

Yes, we were landing on 26L. We departed off of 27R. But the confusion was the fact we initially programed 27R for the landing. When we changed it, it stayed on the map. So we'd thought. It really was there all the time, but we were busy being vectored. This is one of those "coincidences" they call "distractors" in training.

Thankfully VMC conditions helped confirm we were where we needed to be, as did the frequencies and the runways in front of us.

Trust but verify.
So.... I learned something interesting about Overweight Landings during this search for answers on the map. More to come on Thursday!

Enjoy the Journey!
XOX Karlene
Posted by Karlene Petitt at 12:48 AM