Good things happen in threes, and this time it's the third generation of flyers. Daniel Sallee was born with the lineage of aviation in his blood. His grandfather, Jack Sallee, would be very proud of the man he's become. I know that his father, Andy Sallee, is too. 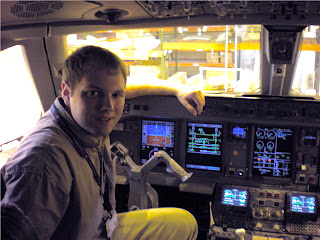 Danielle is just 21-years-old, but you would never guess by his experience. He's currently flying and Embraer 170 for Shuttle America... a Delta Connection and sometimes United Express.

He started flying for America Shuttle in early 2008, but ended up being furloughed for a year and a half. During that time he flew charters out of Port Angeles in a Cessna 206, and then Chieftains and a Beech 99 for Ameriflight until Shuttle America called him back about a year ago.

He currently flies about 60 hours a month and teaches recurrent ground school and captain upgrade classes, too. He's also working on his 4-year degree with Embry Riddle in Aeronautical Science. Daniel has about 3000 hours of flight time. Did I mention he's only 21?

Daniel and his sister have been around planes their entire life. Elisa, now 16, loves planes and plans on taking flying lessons, but Daniel say's she's focused in sports. She's an aviation natural, so I'm sure she'll follow her big brother, dad, and grandfather's path one day. Focus appears to be a central theme in the Sallee family.

I asked Daniel why he wanted to fly. He said...

"At no point in my life can I remember not wanting to fly. It started from day one, spending time with my dad and grandpa at Sequim Airport, around Coastal and everything. I have always taken any and every opportunity to fly anything. I absolutely love it! I remember watching my dad come home from a week long trip and thinking about how neat it was that he flew a 727 and how much I liked his schedule. One of the most memorable moments of my life was having the opportunity to ride on the one of my dad's flights at DHL right after I got hired here and just before DHL shutdown. Today when I go to fly a 4-day trip, it may seem a bit more routine, but I still absolutely enjoy it! And take any chance I get to fly something new."

Daniel's company, Shuttle America, has recently merged with Frontier Airlines which has unfortunately postponed his Captain upgrade, perhaps forever. But he won't let that stop him. He's building hours and keeping options open.

On the personal side of his life... Daniel is also a newlywed! He got married to Rachel last October.


Rachel spent the second half of her childhood growing up in Sequim and they knew each other through friends, but not very well until after high school. She attended Washington State University for Mechanical Engineering and then transferred to IUPUI (Purdue's Indianapolis Campus) to complete her degree.

"My wife is a great positive influence in my life and pushes me to accomplish my goals and dreams."

At 21-years-old, Daniel has a very long career ahead of him, and many airlines to choose from. Timing is everything in this industry. Daniel's timing, combined with passion, effort, and talent, will open many doors for him.

Posted by Karlene Petitt at 8:13 AM